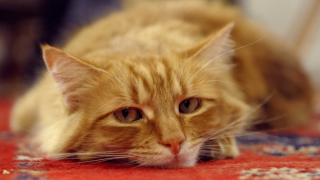 At the end of last week, our free exhibition "Cats on the Page" opened, covering cats in all their roles in fiction and art. Here are a few examples of the roles that cats have played in science.

The most famous cat in science, of course, is the notorious Schrödinger's Cat thought experiment, put forward by the physicist Erwin Schrödinger in 1935 to express what he thought were the truly bizarre implications of the Copenhagen Interpretation of quantum physics. In this morally questionable experiment, a cat is sealed in a box with an apparatus that has a predictable probability, within a set time, of releasing cyanide gas and killing it, analogous to a subatomic particle which, until it interacts with another object, may be in one of a number of states with known probabilities. According to Schrödinger, when the probability of the cat being dead reaches 50%, it can be considered, so long as the box is not opened, to be simultaneously alive and dead. Schrödinger actually put this forward as a self-evidently ludicrous demonstation of how silly he thought that the Copenhagen interpretation was, but many physicists since have taken it entirely seriously, and single atoms or subatomic particles have been demonstrated in real-world experiments to behave as if they are in two states simultaneously.

There has been at least one recorded case of a cat being credited writer on a peer-reviewed scientific paper. In 1975, the physicist and mathematician Jack H Hethrington was irritated when a peer reviewer for Physical Review Letters pointed out that he had used "we" consistently in a manuscript on which he was the only credited author, and that the journal style guide would require this to be corrected to "I" throughout. Rather than rewrite the paper, Hethrington credited his cat, Chester, as the second author "F D C Willard", the "FD" coming from Felis domesticus and Willard from the name of Chester's father. In 1980 he published a popular science article under the name of Willard alone. In this case, it was reportedly motivated by disagreements between him and some co-authors, leading to them not wanting to credit it to any real person.

That example was not motivated by hostility, but stings based on exposing questionable degrees or dubious professional organisations by having animals "earn" qualifications have a long history. The first case seems to have taken place in 1967 when a Television Wales team investigating a bogus "English Association of Estate Agents and Valuers" successfully got them to appoint a cat named "Oliver Greenhalgh" as a fellow. British science writer Ben Goldacre has exposed the dubious nature of certain "nutritionist" qualifications by getting his cat a professional certification. To rub salt in, the cat had been dead for some time.

And finally, cats may some day have a role in protecting post-apocalyptic humans from our darker legacies if our technological civilisation collapses. A serious proposal has been made to genetically engineer cats to change colour or glow if they encounter radioactivity, and create a legend that they can detect evil, in order to prevent far-future peoples from unknowingly digging up still-hazardous nuclear waste dumps.

Posted by The Science Team at 4:48 PM