The Anglo-Saxons and medicine (in the modern scientific sense of the word) do at first glance seem to be separated by a huge chasm of science and reason. No doctor today would recommend the use of cow dung in any circumstances! Yet, when one looks more closely, we can see that the Anglo-Saxons idea of medicine (or perhaps “healing” would be a more appropriate term) is based not just on superstition but classical teachings, folklore and practical observation. In particular, the Anglo-Saxon’s were no different from other people of the distant past in that they held on to an ancient desire to harness the healing power of plants and the world around them.

Early managed plant life, and later gardens, were for culinary and healing purposes, rather than leisure or aesthetic reasons. This is evidence from the long history of Herbals, or, in effect, botanical encyclopaedias. One of the oldest extant examples of an Herbal and healing / medical book is Bald’s Leechbook (shelfmark Royal MS 12 D XVII). One recipe from Bald’s Leechbook involves mixing wine, leek and garlic to vanquish an infected eyelash follicle, more commonly known as styes. Freya Harrison, a microbiologist, and Christina Lee, an Anglo-Saxon scholar, decided to test this Anglo-Saxon potion in laboratory conditions. The potion was tested on skin samples infected with Staphycloccus aureus which is a version of the bacteria that causes styes and the MRSA superbug. Amazingly, the potion killed 90% of the bacteria of this antibiotic-resistant superbug (C. Wilson. New Scientist, 2015). This demonstrates the Anglo-Saxons were not just blindly throwing around different ingredients in the hope of finding a cure, but were applying various potions and then noting the effects. In this case, they would have noticed what we know today as the antibacterial qualities of garlic and leek. 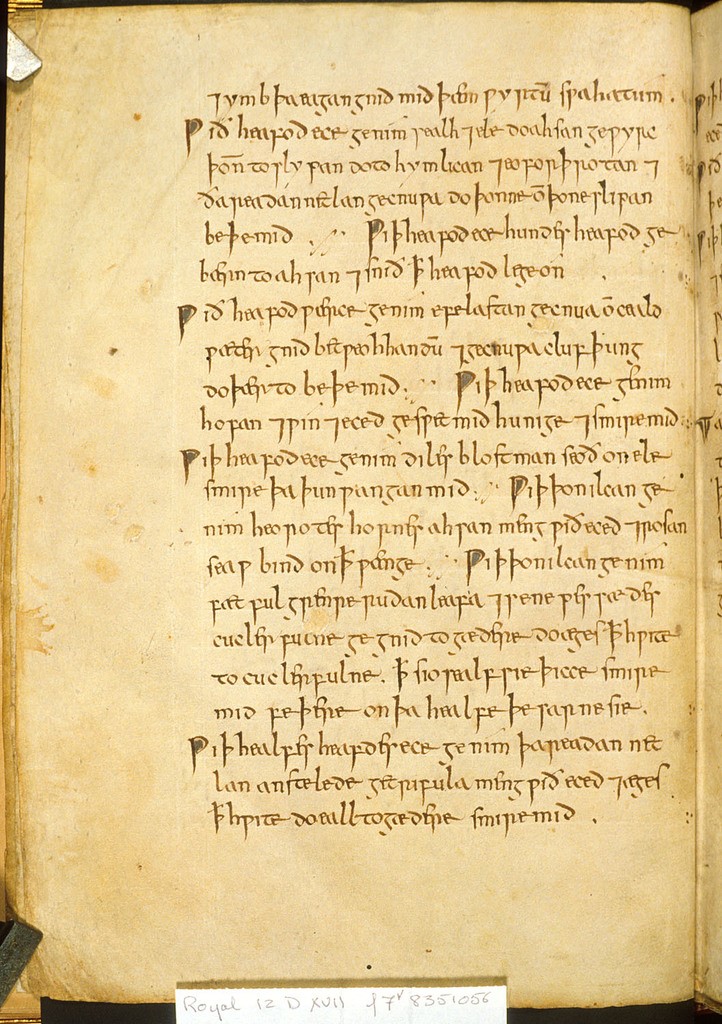 Bald’s Leechbook also suggests that the Anglo-Saxons were aware of a longer medical tradition going back to antiquity. This can be glimpsed from a linguistic study of the text. The vernacular material provides insightful readings of Latin technical vocabulary, and also shows a knowledge of technical terms of Greek origin. However, this limited knowledge of the ancient world does create what Cayton describes as “an uneasy fusion of Classical doctrines such as the four humours, and pagan Teutonic ideas such as the worm and elfshot as carriers of disease.” (Cayton, 1977)

As the exhibition Anglo-Saxon Kingdoms: Art, Word, War makes clear, the Anglo-Saxons were much more than just a bunch of inward looking Dark Age warriors who had no knowledge of the wider world, and whose only medical experimentation involved using leeches and cow dung to solve their ailments. We can see from Bald’s Leechbook alone, that the Anglo-Saxons were involved in rudimentary observational science and had a knowledge of Latin and Greek texts.

To add a light hearted note, I should also say that the Anglo-Saxons believed in the Doctrine of Signature. This is the belief that herbs and plants that resembled parts of the body could be used to treat ailments for the corresponding body parts. I think there could be plenty of material here for a new Carry On film about the Anglo-Saxons!

Posted by The Science Team at 3:13 PM