The centenary of the 1918 flu pandemic 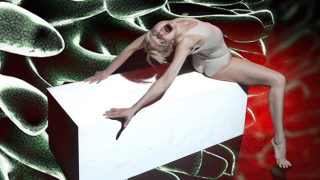 A dancer in "Contagion", a piece memorialising the pandemic presented at the British Library earlier in November

This November sees not just the centenary of the end of the First World War, but the centenary of the peak of the influenza epidemic that came at its end. The 1918 flu epidemic may have killed fifty million people or more worldwide, over three times the number of people killed in the war. It is thought to have been the third worst disease epidemic ever in Europe, after the fourteenth-century Black Death and the sixth-century Plague of Justinian. 228,000 people died in the UK, with as many as a third of the population infected, although the death rate among those who fell ill was around 2.5%. 1918 was the first year since official records began that deaths in Britain outnumbered births. Epidemiological studies have shown that children whose mothers suffered flu during pregnancy suffered lifelong negative effects on their health and employment histories.

The flu is still sometimes known as the Spanish Flu, although this is a misnomer that, even at the time, seriously upset the Spaniards. It was associated with Spain because Spain, being neutral in the war, had less media censorship than other European countries, so that the epidemic was more honestly reported. The first unambiguous cases of the pandemic broke out at a US Army base in Kansas in March 1918. The first worldwide wave continued through the spring and summer, but appeared to be no more problematic than ordinary flu. The second, far more lethal wave, occurred in September to December 1918, while a third, less serious wave took place in the first half of 1919.

However, some people have suggested that earlier outbreaks of disease may have been unrecognised early stages of the flu pandemic. Particular suspicion has been cast on an outbreak of a lung disease called at the time "purulent bronchities" which struck the Allied Powers' huge military camp at Etaples in France in early 1917, and a lethal epidemic of lung infection which hit the region of Shansi in China in the winter of 1917-8, although that was believed by local authorities at the time, and many scientists to this day, to have been pneumonic plague.

A major question, especially given the possibility of further flu pandemics in the future, is what made the 1918 virus so lethal. As well as the sheer number of fatalities, it was unusual in killing young and healthy people in large numbers, rather than those who were elderly or frail. Some people have blamed the physical and psychological stresses of the war, and in particular the long-term effects of chemical warfare, for this, but young people also died in countries which were barely affected by the war. It has been suggested that healthy people died because of a phenomenon known as "cytokine storm", where the influenza infection causes the immune system to go into such a state of extreme activity that it itself causes fatal damage to the lungs. This is more likely to happen in people with healthier immune systems, although recent work has suggested that it might be more likely in people with a specific genetic condition in which the first stage of immune response, involving the production of interferon, is unusually weak.

In 2005, the genetic code of the 1918 virus was sequenced from samples taken from the body of a woman buried in Alaska, which had been partly preserved by the cold climate. This indicated that the 1918 virus was a member of the "H1" type of flue virii. That gave rise to a new theory about the higher death rate among young people - for the previous thirty years the majority of influenza circulating worldwide had been of the "H3" type, so older people may have been more likely to have encountered H1 influenza before and had more immunity to it.

Another mystery is why the 1918 pandemic had so little apparent cultural impact at the time. The most famous deaths from the virus were the poet Guillaume Apollinaire, the artist Egon Schiele (along with his wife Edith, who was pregnant with their first child), and John McCrae, author of one of the most famous poems of WWI remembrance, "In Flanders Fields". It also had a wider historical impact. Some military historians argue that the last major German offensive in 1918 failed only because of flu among the soldiers. The British prime minister David Lloyd George nearly died, although this was covered up at the time. The Versailles Treaty might potentially have been less harsh on Germany, reducing the chances of WWII, if the US President, Woodrow Wilson, had not been incapacitated with the flu during the later part of the negotiations. And the death of the leading USSR politician and administrator Yakov Sverdlov has been said to have opened up an opportunity for Josef Stalin to begin his rise to power. Some suggest that the influenza was not seen by people in general as a separate catastrophe from the war, while others have argued that, despite the death toll, it was seen as "just the flu" in an era when death from infectious disease was still much more common than it is today.

Posted by The Science Team at 4:47 PM