Lab notebooks - handwriting at the core of science 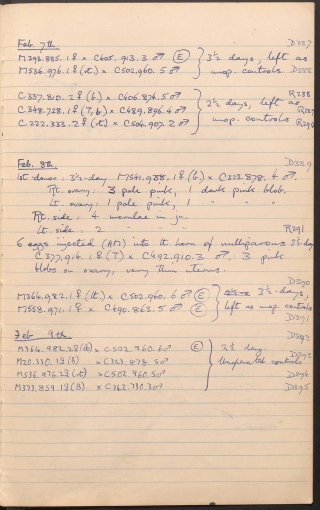 Today is World Handwriting Day, and we thought we’d pay our respects to the most important role handwriting plays in science, one which you might not have heard of if you aren’t a practicing scientist. This is the “lab notebook”, a scientist’s daily diary of all their experiments, thoughts, and other scientific activities. Until relatively recently, these were always handwritten, as they were meant to record what, in detail, someone was doing as they did it. Waiting to create them until work was finished caused too much risk of forgetting or distorting something.

Lab notebooks grew out of the personal diaries and notebooks of individual researchers. Some notebooks by well-known scientists have become Library treasures in their own right. One of the most famous works in our Treasures of the British Library exhibition is the Codex Arundel, a collection of notes written by Leonardo da Vinci (although probably not in the order they were bound) in the sixteenth century. At the other extreme of history, the Treasures Gallery currently displays the biologist Anne McLaren's lab book on embryo transfer in mice. Outside the BL, most of the lifelong field and theoretical notebook collections of Charles Darwin are digitised and available online, as are some of Albert Einstein's most significant theoretical notebooks. At the other end of accessibility, some of the lab notebooks of Marie and Pierre Curie, held by the National Library of France, are reported to still be so radioactive that they are not safe to handle without protective clothing.

Laboratory notebooks later became an even more important record of exactly what was done, as lone researchers were replaced by academic and private-sector research groups, science and technology became ever-more important to society, and scientists were expected to describe their methods in detail so that they could be replicated and turned into innovative technologies, materials and treatments. Additionally, until quite recently, American patent law worked on a “first to invent” basis whereby the person who could prove that they had the idea for an invention first, or their employer, had the right to a patent. Laboratory notebooks were the main source of evidence for this. In recent years, scientific misconduct has become a higher-profile issue, as scientists worry about a “replicability crisis” where too many uncertain or exaggerated results have been published. Lab books help prove that the work was done as the researchers claim, or the detail expected in them make discrepancies easier to recognise. And the notebooks of eminent scientists are a rich source for scientific historians.

By the latter part of the twentieth century, some organisations had very detailed instructions for how laboratory notebooks should be completed and stored. Lab books had to be written exactly as the work was carried out, or as soon as possible – no jotting notes on scraps of paper and writing them up at the end of the day. Notebooks were considered the property of the employer or the university, and could not be removed from the lab. And they had to be clearly paginated with no chance of pages being removed or replaced.

Many laboratories still use paper notebooks, due to the ease of simply writing notes down as you go. In many types of science, electronic devices are at risk of being exposed to spillages or damaging electromagnetic conditions, or are simply unwieldy. Some researchers also like to keep their detailed records to themselves instead of sharing them with a group. Some research groups and organisations are now moving to electronic recording, but the lifetime of electronic data can be questionable due to failure to back up and the lifespan of media. Specifically-designed electronic laboratory data systems are more secure. They are more common in industry than academia, as academics are more independent and less likely to respond to top-down orders, and academic institutions can be less able to afford the necessary software and hardware. The advantages of electronic research notes systems are that you can save large amounts of original data directly into the system without retyping or printing it, clone records from earlier experiments to save time, search your records more easily, share data within the group easily, and track the history of records. Now data is often electronically recorded and can be directly copied into a laboratory system without a transcription stage. It is possible to use general project and collaboration software packages such as Evernote, SharePoint, or GoogleDrive but specifically-designed software is now available.

In 2011, Gregory Lang and David Botstein published a scanned copy of the entire lab notebook covering the research leading to a paper on yeast genetics, as an attachment to their e-journal article.

Modern lab books rarely find their way into the British Library collection, but our most famous example is the collection of Alexander Fleming, the discoverer of penicillin (also including records of earlier experiments by his mentor Sir Almroth Wright). As well as the material by Anne McLaren mentioned earlier, we also have some material from the photography pioneer Henry Fox Talbot, electrical inventor David Edward Hughes, and biologist Marilyn Monk.