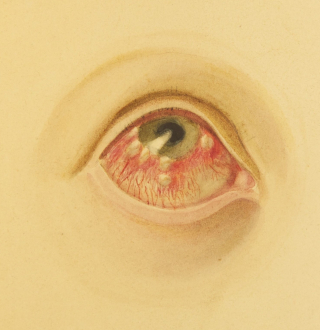 Eye painting by an unknown artist from the Moorfields collection, digitised by UCL. Used under a CC-BY Creative Commons license.

Yesterday Philip went on a CILIP-sponsored visit to the Joint Library of Ophthalmology at Moorfields Eye Hospital.

The library is joint between the NHS trust responsible for Moorfields and the UCL Institute for Ophthalmology. The hospital was opened in 1805 in Charterhouse Square as the Dispensary for Curing Diseases of the Eye and Ear. The driving reason for this was the number of soldiers who were returning from the Napoleonic wars in North Africa with what was known as “Egyptian Ophthalmia”, now recognised as trachoma. The founders were John Cunningham Saunders and Dr. John Richard Farre. In 1810 a medical school was opened and alumni were responsible for opening ophthalmic hospitals in other parts of the world. In 1821 the hospital was moved to Lower Moorfields near what is now the Broadgate office complex and renamed the London Ophthalmic Infirmary, although it quickly became popularly known as “Moorfields”. In 1837 it achieved royal patronage and became known as the Royal London Ophthalmic Hospital. In 1897 the hospital moved to its current site in City Road after the Moorfields site became overcrowded. In 1947 the hospital merged with the Royal Westminster Ophthalmic Hospital and Central London Ophthalmic Hospital, and the name officially became Moorfields. A green line is painted on the pavement from Old Street tube station to the hospital main entrance, to help partially-sighted people find their way.

The Institute of Ophthalmology was founded in 1948, initially on the site of the former Central London Ophthalmic Hospital in Judd Street. It became part of UCL in 1995.

The library now includes items from all the predecessor organisations, and as it is considered a national subject collection no material is disposed of. Much of the journal collection was donated in exchange for the content being indexed in either the British Journal of Ophthalmology or Ophthalmic Literature. There are 7000 books, 63 currently subscribed journals, and 250 journals which are no longer published. There are over 280 CDs or DVDs. The library currently keeps paper subscriptions when possible due to concerns about loss of access due to subscription cancellation or technical obsolescence – many of the CDs or DVDs cannot be used due to outdated software requirements. Most of the material is on open shelf apart from the rarer collections. The rarer material consists of 1500 books and pamphlets, many of which have been digitised by the Wellcome Institute and are included in the Wellcome online digital library. There is also a unique collection of 1700 painted images of healthy and pathological eyes. Many of the earlier eye paintings were by the sisters Mary and Alicia Boole, who were daughters of George Boole of Boolean logic fame. They were mathematicians in their own right and many of their siblings and the following generation had notable achievements in science and art. Later twentieth century paintings were created by the talented medical artist Terry Tarrant. The paintings have been digitised by UCL .The rare books include copies of John Dalrymple’s 1834 “Anatomy of the Human Eye”, the first ophthalmic textbook in English, and the “Atlas of Ophthalmoscopy” by Richard Liebreich, inventor of the ophthalmoscope.

There is a photographic collection of patients and their conditions, often “before and after” treatment. This includes an interesting dimension in terms of Victorian attitudes to privacy and personal identification – many poorer patients had their full names given, while more middle or upper-class patients are identified only by given names or initials. There is also a collection of bound notes on patients back to 1877.

Finally, there is a “museum” collection of artifacts. Many of them are originally from the Institute of Ophthalmology. They include eye testing equipment, ophthalmoscopes, surgical instruments and microscopes. Particularly unusual exhibits include an ivory leech holder used to apply leeches to the area around the eye to treat glaucoma, and a pair of prism spectacles that redirect the vision downwards through ninety degrees, to allow patients forced to lie flat on their backs to read more easily.

The library still serves an audience of predominantly medical students and practitioners. They do a lot of training on databases and library inductions. They lend the majority of the material and there are self-service lending/returning terminals. They also do inter-library loan.

Other activities include doing systematic reviews and helping people with basic IT skills.

There are 32 satellite sites with electronic resources only.

Last year the library achieves Platinum status in the Green Impact scheme for environmentalism in libraries, based around recycling and saving energy.

The whole institution is intended to move in a few years time to a new site in the St Pancras area.