The Flight of the Hoverfly

“According to classical aerodynamics, it is impossible for a bumblebee to fly!” said the Doctor once, around 1971, standing in the Wiltshire countryside. (Doctor who? THE Doctor. The Third one.)

But years earlier, in the 1950s, John Maynard Smith – not a doctor then or ever, except when people misaddressed him – had in fact glued one to a pin and showed why and how they could.

Well, to be honest, he had glued a hoverfly to a pin, not a bumblebee. Although he and M.J. Davies, fellow undergrad at University College London, had tried bees. But the bees were unwilling to fly when tethered, so hoverflies had to serve as stand-ins.

Their reason was so nicely summed up by the Doctor: science could not only not explain how bumblebees managed to fly, according to science – aerodynamics to be precise – they shouldn’t be able to fly at all. This idea had got hold of people’s minds because they took aerodynamics as applied to helicopters and rotating disks and then applied it to the wings of bees and large flies. Thinking like that, they concluded that these insects shouldn’t be able to get enough lift to fly.

So Maynard Smith and Davies etherised flies and glued them onto a pin before they surrounded them with, essentially, fluff (metaldehyde particles, to be exact) and flash photographed them, timing the length of exposure. ‘The resulting photographs,’ Maynard Smith remembered in 1990, ‘were fairly awful by modern standards, but were good enough to show that the velocity of the air in the jet was about one-third of the theoretical values, and the area of the jet correspondingly greater.’ Below is a surviving photograph from the experiments, numbered 11. The large white shape roughly in the centre is the fly, the white smudges around it the traces left by the fluff, indicating the air movement created by the beating wings. 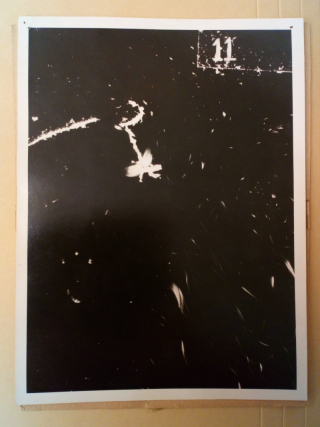 To put the results differently, insects like bumblebees, bees and hoverflies can fly because of the air’s viscosity. Viscosity is the resistance to a change in shape, or the movement of neighbouring portions relative to one another. This means that when a large insect beats its wings, the wings drag along more air than just the air directly affected by the wing. This additional volume of air - ‘about ten times more air than you’d think’ - is large enough to provide lift for the insect; the downward jet of air supports its weight: it flies.

Why? Scale proved to be important: helicopters and bees operate on rather different ones. ‘It’s a very small scale, and the viscosity of the air means that not only the air that’s actually gone past the wings is going into a jet below the bee but a great mass of the air from all around is being sucked in by viscosity. […] We tried to publish that and never could. I was [...] cross about that.’

While they didn’t manage to publish in a scientific journal (the Journal of Experimental Biology rejected it around 1950), Maynard Smith did present his and Davies’ findings at a meeting on insect flight at the Zoological Laboratory in Cambridge during the summer of 1953. The meetings were the result of ‘attempts to bring together a group of persons with a special interest in the flight of insects.’ The meeting notes stress that the experiment had been developed independently by Maynard Smith and Davies. This was important because it was similar to one described by F.S.J. Hollick, who had, for example, published on the flight of the fly Muscina stabulans in 1940. (The report also gives us the exact formula used by Maynard Smith and Davies: ‘The mass of air passing through the wings per second (m) was then calculated by using the expression W = mv, where W is the weight of the insect, and v the velocity of the air. Power was then calculated from the expression P = 1/2m.v2, and the average value determined for several species was 0.009 h.p. per lb. of flight muscle. Using Wigglesworth’s figures for the rate of sugar consumption in Drosophila, the efficiency was estimated at between 1 and 2 per cent.’)

The experiment and ‘fairly awful’ photograph saved in Maynard Smith’s archive are fascinating not only as an example of 1950s research tools. It also illustrates Maynard Smith's transition from aircraft engineer to biologist. He had a first degree from Cambridge, then worked as an aircraft engineer during the Second World War, and only in the late 1940s switched careers by going back to university to study biology. In studying the mechanics and efficiency of flight, both in insects and in birds, his engineering background and knowledge of aerodynamics, mathematics and equations proved invaluable.

Second, it is an example of Maynard Smith’s early trouble in getting papers published. His research and results were from hard to impossible to get past mathematically ignorant biologist reviewers. A comment on one of his papers on the evolution of flight even claimed that the author had no knowledge of aerodynamics!

‘Now this did slightly annoy me,’ Maynard Smith commented. ‘If they had rejected it on the grounds that I didn’t know anything about animals I wouldn’t have minded so much, ‘cause it was probably true. But, you know, test pilots had been trusting their lives to the fact that I knew some aerodynamics for a number of years; I felt a bit cross.’ 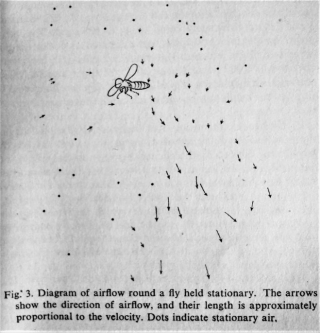 Maynard Smith did manage to publish that particular paper eventually, in 1952, but his work with Davies on hoverflies proved impossible to publish in a scientific journal. His contacts at Oxford saved him. David Lack, author of The Life of the Robin and Darwin’s Finches, introduced Maynard Smith to Michael Abercrombie and M.L. Johnson, a husband-and-wife team of biologists at the University of Birmingham. They were editing the popular biology journal New Biology, published by Penguin. The journal aimed to reach the educated layman and schools, explaining and presenting biological research. Maynard Smith published “Birds as Aeroplanes” with them in 1953. All the things he had trouble getting into professional journals, he included: his research with Davies and mathematics. The above figure from that article translates the photograph into a more easily interpretable illustration. This article marks the start of Maynard Smith’s successful third “career” as a science communicator, which he continued to do next to his research for almost half a century.

Lastly, the photograph shows Maynard Smith in the role of the experimental biologist, a role that he later abandoned for theoretical biology. As a postgraduate he worked in the laboratory on the genetics of the European fruit fly Drosophila subobscura and largely ignored theoretical problems. This wasn’t due to theoretical incompetence but rather due to the fact that J.B.S. Haldane, one of the founding fathers of population genetics, was working down the hallway. Maynard Smith later commented that their was no point in doing theory because Haldane would find the solutions before anyone else. The switch to theory happened around the time Maynard Smith accepted a deanship at the University of Sussex in 1965. Not only had Haldane left the UK for India previously, but Maynard Smith's new duties didn’t leave much time for fruit fly farming and experiments.

It remains to clear the Doctor of any possible misapprehension that he was ignorant of insect flight. He likely knew exactly how and why bumblebees fly. He’s the Doctor. But he needed to make a point to a rather incredulous sergeant who was about to build an instrument with the Doctor’s instructions.

DOCTOR: Negative diathermy, Sergeant. Buffer the molecular movement of the air with the reverse phase short waves. It’s quite simple.

DOCTOR: Yes, well, according to classical aerodynamics, it is impossible for a bumblebee to fly!

This blog was written for British Science Week. As part of this ten-day celebration of science, the John Maynard Smith Archive will also feature in an event on 15 March 2019: ‘Dear John: The Kin Selection Controversy’.