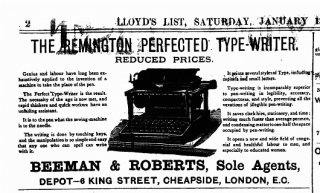 Among the exhibits in our Writing: Making Your Mark exhibition is this advertisement for a "Remington Perfected Typewriter". Guest blogger James Inglis, from the University of St Andrews and the National Museum of Scotland, wrote this guest post for us on how far it was from "perfected".

In 1878, American sewing machine and gun manufacturers E. Remington and Sons released the Remington Standard No. 2. Often regarded as the first commercially successful writing machine, the No. 2 Typewriter incorporated many features of typewriters that we are familiar with today. The No. 2 was the first machine to use a shift mechanism; based on patents by Lucian S. Crandall and Byron Brooks in 1875, this allowed the user to change between upper and lower-case letters. The No. 2 also showcased a QWERTYUIOP keyboard, which was first introduced on Remington’s Sholes and Glidden Type-Writer released in 1874. Today the QWERTY keyboard is ubiquitous across computers and smart devices.

Yet for all its success, there was one glaring problem with the Remington Perfected Typewriter. This was a drawback that beset all Remington typewriters in the late 19th and early 20th centuries. The No. 2 was a blind writing typewriter. In other words, the writing was not visible as you were typing it!
To understand the blind writing typewriter design, the images below show a No. 2 Typewriter from the National Museum of Scotland’s collection. The carriage of the No. 2 Typewriter is raised to reveal the circular arrangement of typebars known as the typebasket. At the end of each typebar are letters, numbers or symbols cast in relief. Each typebar carries two characters which are selected by using the shift key. Upon pressing a particular key, a system of wires pulls the corresponding typebar upwards, out of the typebasket so that it comes into contact with the inked ribbon directly beneath the underside of the platen (the roller around which the paper is wrapped). The pressure of the typebar through the ribbon leaves an imprint on the paper and the character is formed! 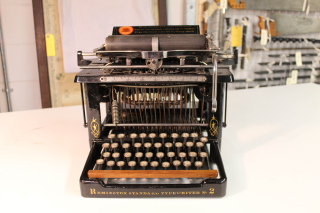 The problem is that when the carriage is lowered the typebars are concealed. The characters are formed on the underside of the platen, out of the operator’s sight. The typist can only see what is written three or four lines later, once the platen has rotated around enough to reveal their previous work. 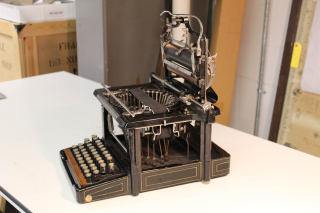 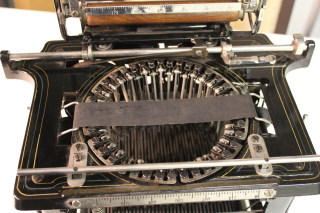 The video below show how pressing the keys lifts the typebars out of the typebasket and brings them into contact with the ribbon.

For inexperienced typists the amusing results of this drawback were illustrated in the article ‘The Type-Writer and Type-Writing’ published in The Girl’s Own Paper on August 18th, 1888. The article describes how, “During the first week or two the learner’s attempts will probably be something like the following”:

The fourth line is particularly bemusing and is caused by the operator typing straight over the previous sentence. Clearly, the typist did not return the carriage correctly in order to start a new line. These kinds of mistakes went unnoticed because the text was completely out of sight.
Yet the common argument was that a properly trained typist shouldn’t need to be able to see their work. A contemporary account of typewriters from Encyclopedia Britannica insisted:

Doubtless the novice who is learning the keyboard finds a natural satisfaction in being able to see at a glance that he has struck the key he was aiming at, but to the practical operator it is not a matter of great moment whether the writing is always in view or whether it is only to be seen by moving the carriage, for he should little need to test the accuracy of his performance by constant inspection as the piano player needs to look at the notes to discover whether he has struck the right one.

The reality of course was somewhat different, and typists of all levels found ways of getting around the problems with blind writing typewriters. The most popular solution was to stop and check on the progress of writing. Typewriters like the No. 2 came with carriages that could be raised and lowered on a hinge for basic operations such as loading the paper and changing the ribbon.

The film below, courtesy of British Pathé, shows a typing pool from around 1905. The typists regularly lift the carriage on the typewriters to check on their work.

Raising and lowering the carriage to check what was typed became a routine part of a typist’s work. While this got around the problem of writing visibility this technique was highly inefficient. As typewriter chronicler and inventor Henry Charles Jenkins commented in a paper to the Society of Arts in 1894:

The Remington, Caligraph, Smith-Premier, Densmore, and Yost machines all have means by which the paper carrier or holder can be turned over upon some kind of hinge, and the writing, which has been performed under and out of sight, is brought into view. Operators get used to this, that they scarcely know how often they do it, but it must consume much time.

Unsurprisingly, rival typewriter manufacturers developed machines where the writing was always visible. The first visible writing typewriter was the Horton released in 1883. A circular introducing the Horton announced: “In the Horton Typewriter has been fully attained… the invaluable object of having all the writing, to the last word, visible to the eye of the operator”. Of the many individuals this will benefit the advert claimed:

It will especially commend itself to those, such as clergymen, journalists and writers generally, who use writing machines in original composition. In the use of machines in which the writing is out of sight much time is necessarily lost in turning up the printing cylinder to get at the run of a sentence construction of which has escaped from the memory; and then, when this has been ascertained and the printing cylinder turned down again, the last word is perhaps forgotten before the rest of the sentence has been formed in the mind, so that the printing cylinder has to be turned up a second time before the writer is able to make any further progress. 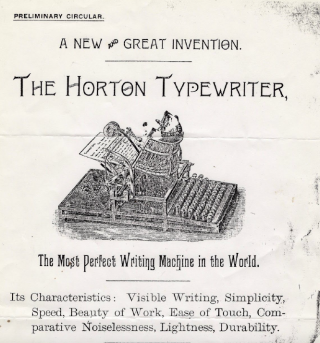 Despite these benefits, the Horton achieved very little success and it was not until the 1890s that visible writing typewriters gained much popularity. One particularly successful machine was the Oliver. The Oliver used U-shaped typebars that struck down on the paper from the right and the left. The video below shows an Oliver Visible No. 3 manufactured in 1904.

The machine that changed the state of the play more than any other was the Underwood. Invented by Franz Xavier Wagner in 1892, and manufactured by the Wagner Typewriter Company, this machine has been described as “the first truly modern typewriter”. In 1895, the patent rights were bought by John T. Underwood, marking the birth of the Underwood Typewriter Company. The Underwood was a front-strike typewriter. That is, the typebars hit the front of the platen leaving the text in full view of the operator. 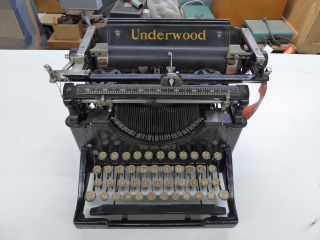 Finally, in 1908 Remington brought out its own front-strike, fully visible typewriter: the Remington Model 10.  The perfected, Perfected Typewriter you might say.

In an advertising pamphlet titled ‘Miss Remington Explains the New Model No. 10’, Miss Remington assures readers: “Yes, I am using one of the new No. 10 Remington Models, and I never supposed that it would be possible to combine so many good things in one machine.” 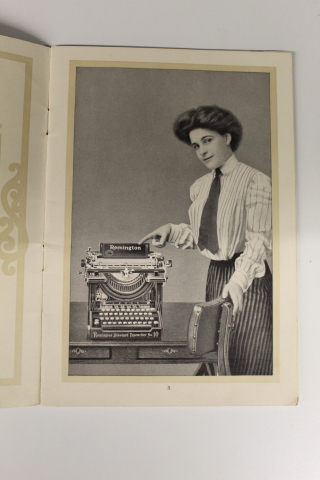 Yet Miss Remington makes no mention of the move from the blind writing, up-strike design of the Remington no. 9; to the front-strike visible writing set-up of the Model 10, which was arguably the biggest change in design since the introduction of the shift key 30 years earlier. Instead, Miss Remington makes vague comments such as “It has all the splendid points that my old Remington had and a dozen others that no writing machine has ever had.”

By 1908, the Remington Typewriter Company had been supporting their blind writing typewriter design for over a quarter of a century. While market pressures forced the company to change to the new and more popular visible writing system, it was too much of a climb down for Remington to admit that the old blind writing typewriters they had promoted and sold for so long, were far from perfect!

James Inglis, The University of St Andrews and the National Museum of Scotland

Posted by The Science Team at 4:14 PM