Anne McLaren (1927-2007) was a leading mammalian developmental biologist who worked primarily with mice and contributed to many fields, including most famously the development of in vitro fertilization (IVF). As McLaren often put it, she was interested in ‘everything involved in getting from one generation to the next’, and in particular, she emphasized the ways in which an individual is always connected to, and a part of, its many environments. Taking a cue from McLaren, then, this post considers how environments—understood materially, socially, and ethically—shaped McLaren’s work.

For McLaren, environmental effects are never incidental—not for cells, not for science, and not for the scientist in society—and even her earliest experiments probed deeply into the effects of various environments. Some of the environmental effects she studied are more familiar, like the effect of ambient temperature on population variance, and others are more surprising, like the genetic effect that a mother’s uterus, and not just the material contained within the egg, has on the development of an embryo. 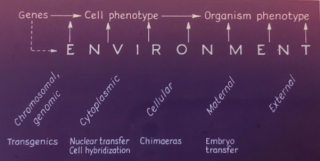 While McLaren’s research showed how interconnected our very cells are with our environments, she showed an acute awareness for how this interconnectivity proves equally true for science itself. For example, McLaren knew that science needed diverse perspectives to grow, and so she actively fostered collaborative working environments. She was also highly attuned to socio-political issues, including the changing interests of funding bodies; structural gaps, like the lack of accessible childcare, that limit the participation of women in science; and the rise of new social concerns, including those surrounding ‘designer babies’ as embryonic research progressed. She knew that each of these issues materially shaped what scientific questions got asked and by whom (McLaren).
But McLaren did not stop with simply acknowledging the ways in which science was affected by its environment. She also held the reciprocal to be true: scientists affect their own physical, socio-political, and ethical environments. She therefore worked throughout her life to uphold what she saw as the duty of scientists, namely, to share research widely and to work with the public in ensuring that science progresses ethically and in the best interests of society.

But how did McLaren’s own research environments affect her actual work? The path that led to her 1958 breakthrough with John Biggers (1924-2001) on successfully transplanting fertilized mouse embryos cultured in vitro (in glass) to surrogate mothers proves an illuminating example.
From 1952-1959, McLaren and her then-husband Donald Michie (1923-2007) worked together on embryo transfer experiments. They first worked at University College London, but when they ran out of space for their mice in 1955, they undertook what proved to be a fortuitous move into the larger facilities at the Royal Veterinary College, London. There, they had room to grow and, as an added bonus, enjoyed relative autonomy from a specific department while doing their work (McLaren).

.
McLaren and Michie’s experiments went through more than just a change of scenery though. Across their work, they tested a variety of processes for ovary transplants, specimen preservation methods, and embryo transfers from a donor mouse to a surrogate mother. They also experimented with superovulation and superpregnancy, or hormonally triggered ovulation cycles and artificially increased litter sizes respectively, in order to consider, for example, what factors might hinder an embryo’s chance of survival, such as uterine crowding. They asked as many questions as they could and perfected a method of transferring embryos in vivo (directly from the donor to the surrogate), while also proving that the surrogate mother’s uterus passed on genetic effects to the transplanted offspring, tracked in the case of their experiments through the number of lumbar vertebrae (McLaren and Michie). 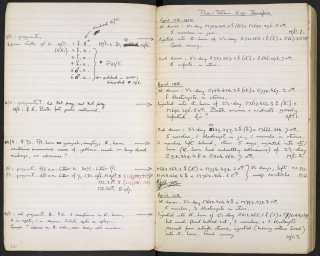 In the midst of this flurry of work, McLaren and Michie met Biggers. Their research interests overlapped, and, with him, McLaren and Michie undertook even more parallel experiments. One such experiment considered the effect of temperature on population variance, mentioned above, which was inspired in part because they had access to three different temperature rooms at the Vet Collage. Biggers, McLaren, and Michie also briefly considered the relationship between the length of a mouse’s tail—a major site of heat loss—and its ability to regulate temperature, although Biggers reports that they never fully explored that project (Biggers). 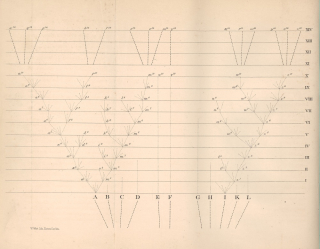 This rich, collaborative, and multi-tasked environment can be likened to a Darwinian tree of research ideas with many offshoots. As a product of this environment, a seemingly small experiment took place over about two months in the summer of 1958. Using the techniques McLaren had perfected with Michie, she and Biggers cultured 249 fertilized embryos for 48 hours in vitro before transplanting them into eight female mice (McLaren and Biggers). Nineteen days later, these transplants resulted in the live birth of two mice, or as McLaren called them, ‘bottled babies’, which were the first mammals ever cultured outside of a uterine environment pre-implantation (Biggers).

This experiment, dubbed by the press as producing ‘Brave New Mice’, justifiably received much scientific and public attention, while also laying the ground work for IVF in humans only 20 years later. Yet, as we see, the experiment itself was but a single offshoot in a much larger web of experiments, in which IVF as such was not specifically McLaren’s focus. This incredible range of McLaren’s impact is due in no small part to the efficient way in which she used the environments, people, and resources around her to their fullest potential, asking as much as she could from and through them in order to learn and give back.

As a PhD student at the University of Edinburgh, Bridget Moynihan’s research focuses on archival ephemera and digital humanities. These same interests led Bridget to undertake a British Library internship, researching the notebooks of Anne McLaren.

Further reading in the British Library

Posted by The Science Team at 2:02 PM