Local Heroes - Trevithick's steam locomotive demonstration of 1808, "Catch Me Who Can"

In September 1808, the Cornish engineer Richard Trevithick exhibited and operated a steam engine called "Catch Me Who Can" on a circular track of about 100 feet in radius, on a site to the south of Euston Road within walking distance of the British Library. This was the first time in the world that a steam locomotive was used to haul paying passengers on a railway. (It was not the first time that passengers had been carried by steam at all, as five years earlier Trevithick had carried passengers on a steam-powered road vehicle, the London Steam Carriage, and in 1804 had used the world's first steam railway locomotive to haul employees of the Penydarren ironworks in Wales.)

Trevithick was the pioneer of the use of high-pressure steam in power, as advances in metal refining had made it possible to create boilers that could safely contain it. His stationary engines were much more efficient than the earlier low-pressure engines of Newcomen and Watt.

It is not clear exactly how long the locomotive operated for, but it was for at least a fortnight. A marathon operation of a continuous 24 hours was promised, but never carried out, probably due to a failure of the track. The very high entrance fee of two shillings may also have put the public off, as well as the delays in getting the demonstration working. The first advertisements had promised that the attraction would be opened in mid-July, something that might be seen as a portent of notorious later delays in London railway openings.

The site has been identified from contemporary reports and maps as probably being a field known as South Murralls, which is now somewhere under the main complex of University College London. During reconstruction of the UCL Chadwick Building a little further south-west, in 1999, a cinder pit was discovered that may have been connected to the demonstration.

Original tickets to the Catch Me Who Can demonstration. Photograph by Science Museum Group, used under a CC-BY-SA license

The only reliable depiction of what the locomotive looks like seems to have been a drawing on the entrance tickets, a few of which have survived. The oldest surviving drawing of the locomotive in action was made in 1872 and appears to have been imaginative, with the locomotive based on the ticket depiction. Famous drawings of the scene attributed to the artist and cartoonist Thomas Rowlandson and dated "1809" are now recognised as probably being early-twentieth-century forgeries. More recently, a contemporary drawing by the artist John Claude Nattes now in the collection of the Guildhall Library under the shelfmark Nattes Drawings No. 50 has been recognised by J P S Buckland, and confirmed by John Liffen, to probably show the boiler of the locomotive before its final assembly. It is very similar to the boiler of a Trevithick stationary steam engine of the same era now at the Science Museum.

A group based in Bridgnorth, where the original engine is thought to have been constructed, has built a replica based on the ticket depiction and other locomotives by Trevithick for which detailed drawings and models have survived. 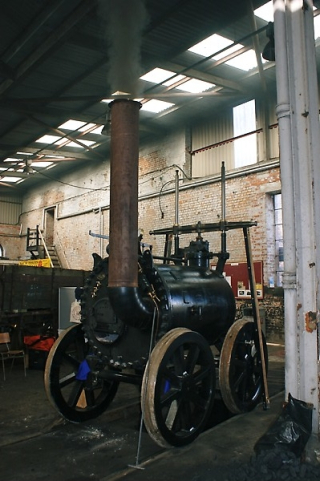 The Catch Me Who Can replica at Barrow Hill. Photograph by Hugh Llewelyn under a CC-BY-SA license.

After the end of the experiment, Trevithick seems to have given up interest in steam locomotion. It may have been because he did not get the amount of money or support that he hoped for, but he was also involved in a range of other projects at the time, including an attempt to build a Thames Tunnel (in which he was nearly drowned in a cave-in) and a short-lived engineering works in Limehouse. In 1810, after a serious illness, Trevithick returned to his home in Cornwall, and much of the rest of his life was spent in mining projects in South America.