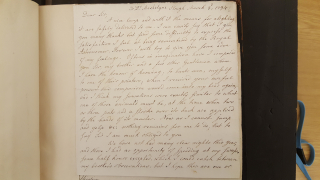 Today is the 270th anniversary of the birth of the German-born British astronomer Caroline Herschel, who discovered eight comets and fourteen nebulae. She also produced an expansion and correction of the previous main British star catalogue, created in the late seventeenth and early eighteenth century by John Flamsteed, and made substantial contributions to the catalogue of nebulae and star clusters published after her death by her nephew John F W Herschel. She made heavy contributions as well to the work of her elder brother William Herschel, famous as the discoverer of Uranus.

Caroline Hershel was born in 1750 in Hannover in Germany, the daughter of a military musician. As the youngest daughter of her family, it was assumed by convention at the time that she would devote her life to helping her mother maintain the home and look after her father and elder brothers, which she resented. Her escape from this came when her brother William invited her to move to England and join him in Bath, where he was working in the family tradition as a musician. Caroline became a promising singer, but when her brother shifted his interests from music to astronomy he assumed once again that she would naturally help him in his own career. Over the years, despite this unwilling beginning, she became genuinely enthusiastic for the subject. In 1782, William was appointed Royal Astronomer by George III (not to be confused with the older position of the Astronomer Royal at Greenwich) and the pair moved to Datchet near Slough, to be closer to the royal home at Windsor. In 1787, William pursuaded the King to pay Caroline a salary in her own right, making her the first woman in Britain to be employed as a scientist.

The work was not just intellectual but physically demanding. William and Caroline had to construct their own telescopes and spend hours in the open air at night making observations. William's telescopes were some of the largest in the world at the time, being from twenty to forty feet in length. On one occasion, Caroline fell and impaled her leg on part of a telescope, losing a two ounce lump of flesh and suffering an injury which a military surgeon later told her would have entitled a soldier to six weeks spent in an infirmary.

Caroline's contributions have traditionally been undervalued due to a mixture of her personal shyness (coupled with disdain for people who she considered intellectually inferior) and her willingness to publicly depict herself as merely a submissive helpmeet to her brother, to avoid controversy, which were played up by subsequent commentators who wanted to depict her as conventionally feminine. Letters to her family which we hold here at the BL reveal her as a rather more strong-willed person, with a sardonic sense of humour.

After William's death in 1822, Caroline moved back to Hannover, where the position of her home in the centre of the city prevented her from much astronomical observation. In response, she devoted herself to compiling the catalogue of nebulae and star clusters. She died in 1848, increasingly physically frail in her later years but mentally sharp until the end.
We hold three copies of the first edition of Caroline Herschel's catalogue of stars, at the shelfmarks L.R.301.bb.2, 59.f.4, and B.265. The copy at L.R.301.bb.2 bears the bookplate of Charles Frederick Barnwell, at one time assistant keeper of antiquities at the British Museum, and is bound with a copy of the star catalogue of Francis Wollaston, another astronomer of the same era.

The letter from Caroline Herschel currently displayed in the Treasures Gallery is taken from the section of the Charles Babbage papers dealing with astronomy, Add MS 37203. It is a copy of a letter originally sent to Nevil Maskelyne, the Astronomer Royal of the era, who was one of the few friends who Caroline was comfortable enough with to make an extended visit to. Her letters to close relatives while living in Hannover, which show a more outspoken side to her, are found at Egerton MS 3761 and Egerton MS 3762. The "Egerton" refers to the fact that they were purchased by the British Museum Library with money from an endowment created specifically to acquire manuscripts in the bequest of Francis Henry Egerton, 8th Earl of Bridgewater.