Fashion is not necessarily the first subject that comes to mind when considering the disciplines that fall under the STEM umbrella.  Nevertheless this is rapidly changing has London Fashion Week demonstrated the potentialities of collaboration within these areas.

The fashion event takes place twice a year in February and September, showcasing over 250 of the most prestigious and emerging designers’ new trends to a global audience. Generating an estimated income of over £100m; fashion is big business. London Fashion Week has increasingly utilised new technologies in its catwalk shows, textiles and designs and this year staged whole shows dedicated to wearable tech. In particular this year’s event in February displayed an ever growing connection between fashion and new technologies hailing in the future of catwalks.

Part of LFW was DiscoveryLAB. This was an experiential section of the exhibitions that highlighted the intersection of technology, art and fashion. Technology was specifically of significance this year amid the coronavirus outbreak that is particularly affecting Chinese consumers, who make up an important demographic of the event. Catwalks were first streamed live almost ten years ago, but this year the virtual coverage of shows enabled wider coverage for those significant buyers that could not attend.

Central St Martins MA fashion show joined up with the company Three to use 5G- cutting edge technology to create an immersive multisensory show combining visual, sensory and sound effects. The catwalk was empty while technology allowed the model Adwoa Aboah to be displayed as a 3D high definition, virtual version of herself. This transformed a catwalk show into a digital experience for the audience and the model alike, who was actually present on the front row watching herself. This use of 5G would enable models to feature on the catwalk for numerous shows simultaneously which could be viewed globally. 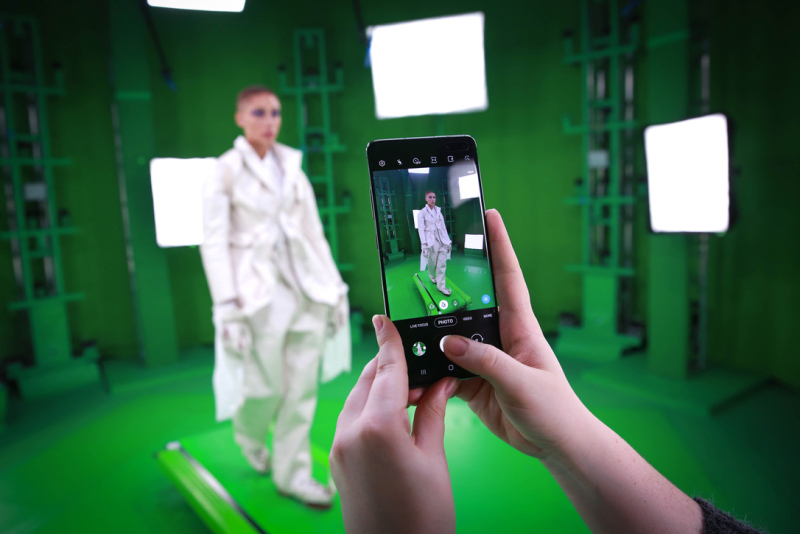 AI is used to help develop more sustainable fashions, as it can be used to cut down on waste of fabric, water and ink at the production stage and utilise more biodegradable materials that can also be recycled.  During one catwalk show augmented reality used perceptual information generated by multiple sensory modalities. This enhanced objects on display allowing the virtual and real world to be experienced interactively in real time.

In conjunction with 5G this technology is used to produce virtual reality clothes.  Maya Jama’s first AR dress which was fitted with sensors that were tracked by Samsung Galaxy Fold 5G network to transform the dress. A similar process is starting to be used to allow online shoppers to try on items before they buy, which is an important development to fill the gap between online and shopping in real time.  AR apps are being developed enabling users to dress avatars akin to a futuristic version of paper dolls. Users can see a simulated view of what items would look like before they buy.  As traditional high street shopping is in decline, many companies and designers are now integrating the use of apps in their business models.  As more purchasing moves to online platforms such apps can only grow in popularity.  The virtual fitting room will become the norm for a tech savvy generation of fashionistas.

In other progressions, NASA technology is being used to take Aerogel, the material used to insulate space shuttles, to create SOLARCORE, a wearable insulator that could be used in winter garments.

This year’s London Fashion Week demonstrated how the application of technologies has the potential to transform the way the fashion industry creates and displays fashion to buyers who don’t even have to be present. This is all indicating that fashion & science are rapidly becoming more related disciplines and perhaps we may start to see more fashion students using the science readings rooms in the future…