I wandered lonely as a cloud
That floats on high o'er vales and hills
When all at once I saw a crowd,
A host, of golden daffodils;
Beside the lake, beneath the trees,
Fluttering and dancing in the breeze.
William Wordsworth

William Wordsworth’s (1770-1850) ‘lonely as a cloud’ poem was conceived in April 1802 on a spring day walk in the Lake District. A few months later, in December 1802, a pharmacist and amateur meteorologist, Luke Howard (1772-1864) delivered a paper in London, on the dynamics of cloud formations. The two events were unrelated but their futures became intertwined. Howard’s essay ‘On the modifications of Clouds’ (1803) resonated deeply within learned circles, including arts and sciences. Clouds soon became the objects of fascination and scrutinizing attention. Articulating the order of the enigmatic sky-scape inspired poets, painters and scientists. The "lonely as a cloud" simile in Wordsworth’s poem, which he composed and published (1807) years after his Lake District walk, is also a nod to Howard’s ideas.  Within sciences a century later, the International Cloud Atlas (2017) of the World Meteorological Organization still draws on Howard’s taxonomy.

What is it about Howard’s approach to clouds that made his essay so influential? Various characteristics have been identified so far; a few are highlighted here.
Howard likened cloud formations to the eloquence of human facial expression:

Clouds 'are subject to certain distinct modifications, produced by the general causes which effect all the variations of the atmosphere: they are commonly as good visible indications of the operation of these causes, as is the countenance of the state of a person's mind or body.' (Howard 1830:3)

By relating clouds to people, especially the face, the most personal feature of an individual, Howard captured the imagination of his readers: a truly powerful captatio benevolentiae at the time of growing interest in the self and its romantic reflections in the world.
In addition to making clouds personal, Howard drew on sources of knowledge that had authority on the weather in different parts of the society in the early 19th century England. One was popular knowledge or weather lore based on the practical knowledge of weather-wise farmers and mariners whose life depended on their ability of reading the clouds and other weather signs. The other was the theoretical knowledge of natural philosophers whose ambitions to account for weather changes employed experimental methods of the fledgling sciences.

'It is the frequent observation of the countenance of the sky, and of its connection with the present and ensuing phaenomena, that constitutes the antient [sic] and popular meteorology. The want of this branch of knowledge renders the prediction of the philosopher (who is attending only to his instruments may be said only to examine the pulse of the atmosphere) less generally successful than those of the weather-wise mariner or husbandman.' (Howard 1830:3)

Howard recognized the challenges of linking the two, translating between different ways of knowing, especially when mariners’ and farmers’ tacit knowledge was considered as  ‘incommunicable’:

'But as this experience is usually consigned only to the memory of the possessor [Howard refers here to mariners, farmers], in a confused mass of simple aphorisms, the skill resulting from it is in a manner of incommunicable; for, however valuable these links when in connexion with the rest of the chain, they often serve, when taken singly, only to mislead; and the power of connecting them, in order to form a judgement upon occasion, resides only in the mind before which their relations have passed, through perhaps imperceptibly, in review.' (Howard 1830:4)

The above description makes Howard a forerunner of the still on-going debate on the commensurability of practice-based and scientific knowledge.
Howard was fully aware of the obstacles presented by the isolation of different knowledge traditions and of the necessity of communication. This is why he proposed a common vocabulary:

'In order to enable the meteorologist to apply the key of analysis to the experience of others, as well as to record his own with brevity and precision, it may perhaps be allowable to introduce a methodical nomenclature, applicable to the various forms of suspended water, or, in other words, to the modification of cloud.'  (Howard 1830:4) 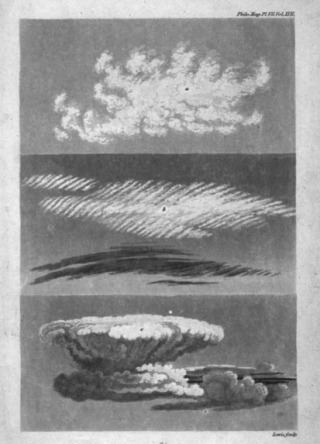 By linking practical knowledge and experimental scientific approaches, Howard highlighted an important similarity: both assumed order and predictability in the formation of clouds, or ‘nubification’, as Howard referred to the process. Both assumed that cloud formation was driven by many more factors than the ‘sport of winds’. Landscape features in the following example: when the morning sun warms up the mist, which sits in the valley as a stratus, formed during the night, a cloud can form as a nascent cumulus over the meadow, an indicator of fair weather:

‘At nebulae magis ima petunt, campoque recumbent.’ (But the clouds seek more the vales, and rest upon the plain)
Virgil Georgicon. Liber I. line 401 quoted in Howard on page 8 in the section of describing cirro-cumulus. (Translated by J.B. Greenough, 190)

Howard’s invocation of Virgil further strengthened his argument for connecting popular and scientific knowledge. Quotations from Virgil’s Georgics Book 1, that covers knowledge of farming and weather recognized in 1st century BC in ancient Rome, gave further credibility to practice-based knowledge. Howard’s readers who grew up on Latin antiquities recognized the Georgics as classic text and this familiarity may have given greater appeal to Howard’s ideas.
Howard’s cloud book is very short, only 32 pages, and illustrated with the author’s watercolours. The British Library holds three editions (1803, 1830, 1894), of which the second is digitized, and freely accessible remotely through Explore (Digital Store 1393.k.16.(1.))
Cloud spotting remains a passion, and Howard’s taxonomy of cirrus, stratus and cumulus still guides cloud observation in the 21st century.
This spring, in our isolation, looking up at the sky from our window, clouds may present the only contact we have with the natural world. The ever-changing cloud formations may give us both a sense of space and a sense of belongingness; even more so if we share our observations on citizen science initiatives, such as BBC Weather Watchers. 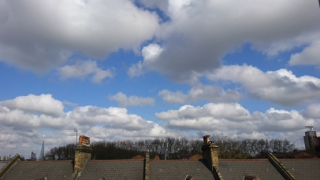 In our bliss of solitude, dreaming on our couch with Wordsworth, may our wondering about clouds also extend to Luke Howard.

‘For oft, when on my couch I lie
In vacant or in pensive mood,
They flash upon that inward eye
Which is the bliss of solitude;
And then my heart with pleasure fills,
And dances with the daffodils.’ Figure 4 A section of a hand-written manuscript of William Wordsworth's poem 'I wandered lonely as a cloud'. © The British Library Board 065858. BL Add. MS 47864