New report on postgraduate education in the UK

The British Library’s postgraduate students are currently greatly missed while the Reading Rooms are closed. Meanwhile, the Library continues to support all researchers as our online collections continue to grow, and we strive to provide the latest information and essential publications for researchers working on the Covid-19 related research.

As we are continuing to think how postgraduate research might change in the weeks and months to come and how we can continue to support it, it has been encouraging and thought-provoking to read a new, extensive report Postgraduate Education in the UK by Dr Ginevra House. The report continues the Library’s collaboration with the Higher Education Policy Institute (HEPI) and a previous report from 2010 that the Library has also been involved with, thus supporting a long-term evidence of the evolving changes in postgraduate education.

The new report uses previously unpublished data to reveal the state of UK postgraduate education in the years before the Covid-19 crisis struck. Dr Ginevra House, the author of the report, explained that despite a tumultuous decade, including the 2008 financial crash, restrictive changes to visas and Brexit, the UK’s postgraduate sector has emerged bigger and more diverse than ever before.

Compared to the past, the new report reveals that a higher proportion of postgraduates are female, studying full-time and young. However, other challenges to fair access remain, with under-participation by males, by White British students, and by those from less advantaged backgrounds.

The analysis considered how postgraduate education was affected by the recession of 2008, when many people sought to gain more education in the face of economic challenges. The report found that those who already had postgraduate qualifications fared better than others in the labour market.

The top 20 key findings in the 150-page report are listed below.

Nick Hillman, Director of HEPI, commented that the report findings show that ‘in some respects, postgraduate education now more closely resembles undergraduate study, with today’s postgraduate students more likely to be women, full-time and young. A higher proportion of postgraduate students are also from overseas. He stressed that the story in this report is a positive one, showing the power of higher education to do good, extending people’s options, delivering the skills employers need and pushing forward the boundaries of knowledge.

It is hoped that the report will provide an essential benchmark for postgraduate education prior to the Covid-19 crisis and help us measure the impact of any changes ahead, as well as provide the evidence of the value of highly skilled workforce at the times of uncertainty. 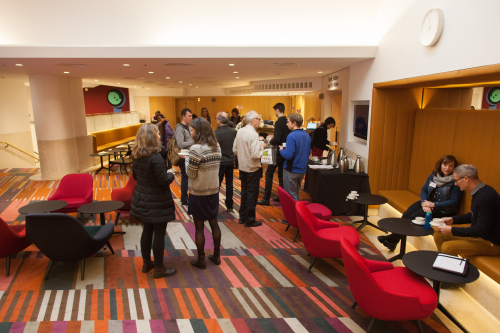 Students networking during a postgraduate open day at the British Library

Posted by The Science Team at 7:53 PM