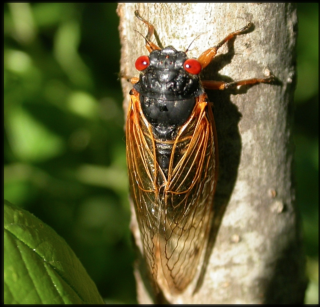 The periodic emergence of swarms of cicadas in the eastern United States which is currently underway was one of the first natural history observations to appear in the scientific literature. In 1667 Henry Oldenburg wrote in Volume 1 of the Philosophical Transactions of the Royal Society

Strange swarms of insects - A great observer, who hath lived long in New England, did upon occasion, relate to a friend of his in London, where he lately was, That some few years since there was such a swarm of a certain sort of Insects in that English colony, that for the space of of 200 miles they poyson'd and destroyed all the trees of that country; there being found innumerable little holes in the ground, out of which those Insects broke forth in the form of maggots, which turned into flyes that had a kind of taile or sting, which they struck into the tree, and thereby envenomed and killed it.”

The biology of this event is extraordinary. A few closely related species of cicadas (Magicicada septendecim, M. cassini, and M. septendecula) form enormous broods of billions of insects. They emerge from the soil as nymphs that moult into sexually mature adults. This happens in the north eastern US states every 17 years while another cohort of species emerges every 13 years in southern states. Cicadas are true bugs in the same group as the froghoppers that produce the cuckoo spit we see in gardens in the summer. 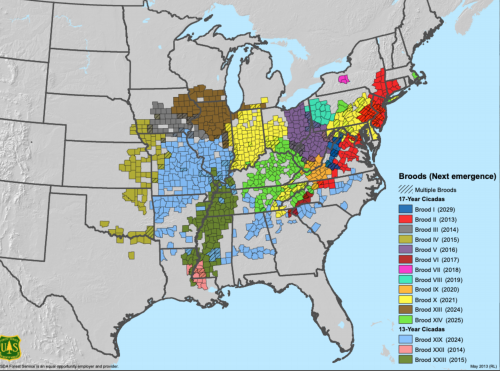 Males gather in chorus groups and their calls attract females for mating. The calls are distinct for each species, preventing hybridisation and lower fertility. Eggs are laid on plant stems and once they hatch the young nymphs enter the soil and begin to feed on the rootlets of trees, moving deeper to larger roots as they grow. The 13 or 17 years that nymphs stay underground makes for the longest development period of any insect although they are not the longest lived insects, termite queens holding that record at 60 years. Individual cicadas grow to be large over this extended period and populations can reach densities as high as 1 tonne per hectare.

Mass emergence is thought to have evolved in the recent geological past of N America. The cooler temperatures during the Pleistocene, when glaciers reached far below the Arctic, favoured a switch from size dependent to temperature dependent development. Other cicada species living nearer the equator emerge at variable times when each nymph reaches a mature size. But in cooler climates with slower and even more variable emergence the population density in any year would be reduced and mating would become less successful. Synchronised emergence increases the population density and with it the opportunities to find mates. Emerging in huge numbers also surfeits predators and the birds and mammals that feed on the cicadas are spoilt for choice, leaving plenty of adults to reproduce.

So, 354 years after their first scientific description periodic cicadas are still the focus of research – how do these insects count the years and why do they count in prime (13 and 17) numbers? These questions are still very far from being answered.

Posted by The Science Team at 2:18 PM