A time for action, not words

Although the dialogues and negotiations of COP26 might be yesterday’s news, the climate crisis is not. The threat remains, and we now face the hard and urgent work of reducing emissions, but also ensuring we can cope with the changes at our doorstep.

Even if there is some good news to be had (subject to the deforestation and methane agreements being implemented, as well as the promised finance materialising and reaching those who most need it), we are still not on the path to limit global temperature increases to 1.5C, which Johan Rockström, the director for the Postsdam Institute for Climate Impact Research, described as a planetary boundary, with every fraction of a degree above it being dangerous. 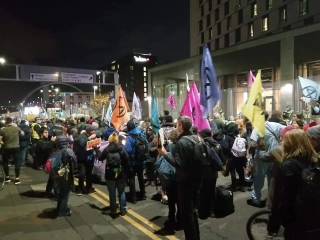 It was alarming to hear the voices of the communities already deeply affected by climate change, with the abiding image of Tuvalu’s foreign minister giving his speech knee-deep in water, and the powerful words of the Prime Minister of Barbados, Mia Amor Mottley, amongst many others. Yet, despite the clearly existential threats already affecting millions of people, the key changes such as phasing out of fossil fuels have still not been achieved.

So, where do we go from here? 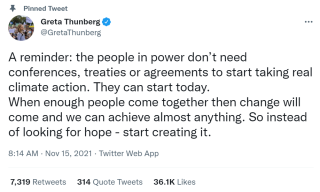 One of Greta Thunberg's tweets after COP26

We cannot leave our future in the hands of high-level negotiations happening behind closed doors - it is down to all of us to work together to come up with solutions and drive change. And this needs to happen now.

Whether we manage to limit warming to 1.5C or not, climate change is happening, and as well as mitigation, we also need to look at adaptation. So, what will this look like in different places nearest to us?

Are you a Londoner suffering due to increased air pollution? Does this means that you see the new Ultra Emission Zone (ULEZ) as a part of the solution? Or do you live in a UK coastal community affected by flooding and coastal erosion? Perhaps you work in a rural community, and are worried about the increased risks of drought and flooding, and the changes that climate change will bring to rural economy?

What role do all the different stakeholders in your community play as we negotiate the issues ahead of us - from government to business, from landowners to citizens? And, who is responsible for driving adaptation and building resilience?

At the British Library, we have brought together representatives from these stakeholder groups in three special events to help us explore these issues affecting British landscapes and communities.

Our first panel, to be held on 22 November, will discuss the issues arising in the coastal communities. Chaired by Sally Brown, a coastal geomorphologist from Bournemouth University, the panel will bring together –

Our second panel, on 24 November, will consider countryside issues and will be chaired by Rick Stafford, a conservationist from Bournemouth University, and the lead author of the recent British Ecological Society report into Nature-Based Solutions. The panel will include –

Our third panel, on 26 November, will be focusing on climate change in urban environments. The panel will be chaired by Hannah Fluck, Head of Environmental Research at Historic England, and the panelists will be –

Sign up to join us for one or more of the above discussions.

Posted by The Science Team at 5:01 PM