Gold - why is it so valuable?

Our current Gold exhibition explores the use of gold in books and documents around the world. This blogpost looks at gold from a scientific perspective, and why it has the properties that have caused it to be so valued throughout human history.

Gold is probably the first metal to be known to humans. Unlike other metals, which need to be extracted from their ores, gold exists in the environment as the metal itself, from tiny specks up to large nuggets. This is because it rarely reacts with other chemicals, which also explains why it does not tarnish in air like silver or rust like iron. The oldest gold items in the exhibition are two gold plaques, with shelfmarks Or 5340 A and Or 5340 B, with inscribed Buddhist scriptures in Pali. They were discovered buried at the base of a stupa in Maunggan in Myanmar and are dated to the 5th or 6th centuries CE. 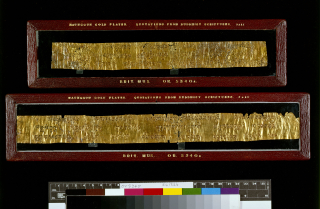 Because of its lack of corrosion, gold has been seen as mystically special, and used for objects of high prestige and to make coins. One notable object in our exhibition is the treaty between the rulers of the Indian city of Calicut (now Kozhikode) and the Dutch, which was inscribed into a two-metre-long strip of gold. Gold was used to symbolise the importance of the treaty but also for practical reasons, as a material that would not rot or decay in a tropical climate.

The reason why gold is so unreactive is because of the number of electrons in each atom. This is the same as the number of protons, and it is this which decides which element an atom is. Within atoms, electrons are arranged in layers called "shells", and gold is particularly unreactive as its outermost shell is full of electrons, which is a particularly stable state for an atom.

Unlike some atoms with full outermost shells, like helium and neon, gold can react with some other chemicals. This is because gold can lose one to three electrons if the reaction can release enough energy to strip them off - called "oxidation", and it can also share electrons with other atoms, without giving up any of its own.

The first material to be discovered by medieval alchemists which can react with gold is the famous aqua regia, Latin for "king's water". Despite the appetising-sounding name, this is very dangerous and you should not try this at home - it is a very corrosive mixture of concentrated hydrochloric acid and nitric acid in water. Because of the hydrochloric acid, the mixture contains chloride ions, which are chlorine atoms which have received an extra electron from the hydrogen atoms in the water. The chloride atoms can share their electrons with the gold atoms to create what are called complexes, and this makes it easier for the nitric acid, which is an oxidising agent, to strip electrons away from the gold atoms, creating gold chlorides which dissolve in the water. Gold compounds do have some uses, such as treating arthritis and in some kinds of traditional silver-based photography.
Fortunately aqua regia doesn't occur naturally, so our gold exhibits are perfectly safe.

Our Gold exhibition is open from Friday 20th May 20 Sunday 2nd October 2022, and you can book tickets online to visit.

Posted by The Science Team at 3:46 PM