To replace the Leonardo da Vinci items that are usually in our Treasures gallery, but are now in the stand-alone "A Mind in Motion" exhibition, our Manuscripts and Incunabula curators have selected some less well-known but very interesting items dealing with the connection between art and science in the Renaissance. On the pure art side are some works by Albrecht DĂĽrer and Michelangelo, but this post is about three volumes of Renaissance science. They sum up the way that humanists during the Renaissance sought to synthesise the existing knowledge of medieval Europeans with rediscovered Classical texts, many of which had been lost in Europe but preserved by Arabic scholars, and further advances that had been made in the Arabic world. 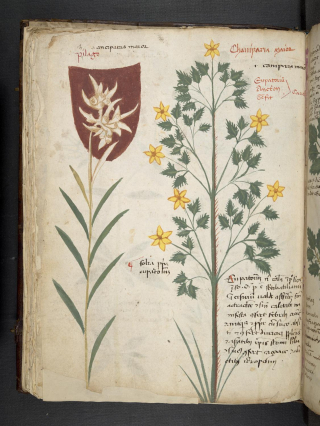 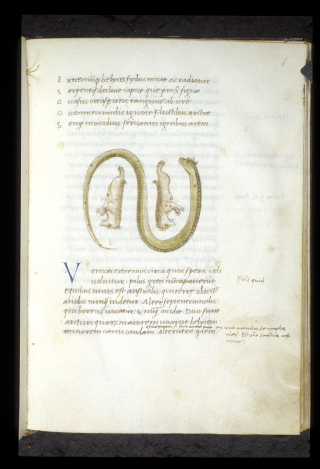 This week, the episode of Sky Artsâ€™ Treasures of the British Library featuring the actor Jim Carter, who you might remember as Mr. Carson in Downton Abbey or, if you are a bit older, Philip Marlowâ€™s father in The Singing Detective, was broadcast. One section covered Jimâ€™s interest in anatomy, and among the items we showed him was one of our copies of Andreas Vesaliusâ€™s paradigm-shifting anatomy textbook, Atlas of the Human Body, the first truly scientific anatomical work. The copy shown in the programme is our copy of the book's first edition, which was owned by Hans Sloane, a famous eighteenth-century doctor and collector whose collections of books, antiques and curiosities formed the original core of both the British Museum and the British Library. I showed the book to Jim in the programme, and here is some more information on Vesalius.

It is a standing joke, much to the annoyance of Belgians, that it is difficult to name great descendants of their proud kingdom in Western Europe. Mentions of Tintin and Poirot (fictional characters) or Jean Claude Van Damme (The muscles from Brussels) may just accentuate their irritancy. However, one of their greatest sons, one Andreas Van Wiesel, who would adopt the more impressive Latinised name of Vesalius, changed anatomy and medicine forever and he really did know about muscles. His magnum opus De Humani Corporis Fabrica, published in 1543, was both a paradigm shift for the study of human anatomy and also a work of the finest aesthetic beauty. 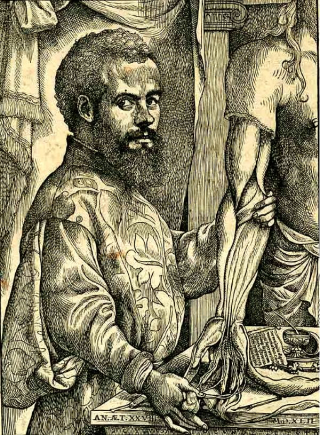 Vesalius chooses his parents well and is born into a family of physicians in 1514 in Brussels, then part of the Holy Roman Empire. Initially studying at the University of Louvain, he completes his doctorate in Padua in 1537 and becomes the chair of anatomy and surgery at the tender age of 23; however, this was not considered an especially important branch of medicine compared to the more exciting emerging areas of lotions and potions.

His big break comes when a local judge, impressed with his work, permits use of corpses of executed criminals thus enabling him to perform comparative dissection of the human form. Such opportunity was denied to the great Galen of the second century who despite being physician to the stars such as the gladiators and emperors, only ever worked on animals due to the religious dogma of the time.

Vesalius quickly realised that Galen had simply extrapolated his findings to humans and consequently had made a huge number of glaringly embarrassing assumptions and errors.

Most notably Galen thought that blood was made in the liver and then used for fuelling muscles, and he also thought there were holes in the septum, allowing blood flow from one side of the heart to the other. Galen incorrectly described the human jawbone as being made of two bones, like that of a canine and he was completely wrong about the shape of the human liver. Vesalius was also able to demonstrate that males and females have identical numbers of ribs, the biblical orthodoxy was that men had one less because God made Eve from Adamâ€™s rib. 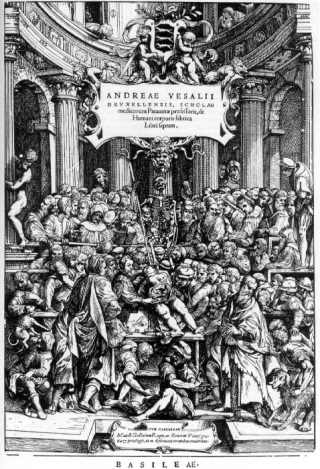 The frontispiece of the book, showing Vesalius dissecting a body in allegorical surroundings

Vesalius then pulls another masterstroke as he goes about publishing this great work, which is essentially the human anatomy in seven books. He employs an artist out of the school of Titian to do the illustrations. These stunningly beautiful drawings of figures striking theatrical poses in classical landscapes grab the limelight, and they will be for ever be known as the muscle men. Vesalius stock rises and he becomes physician at the imperial court of Charles V and later to his son Philip II of Spain. Vesalius is aged 29 and at the height of his powers, 1543 is his annus mirabilis. 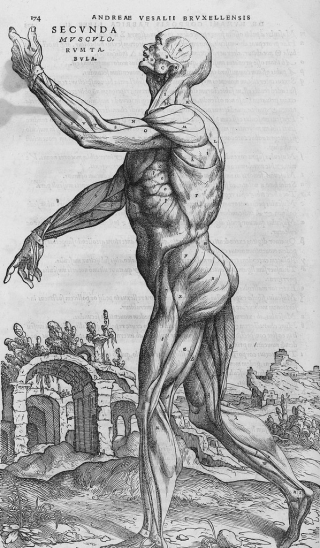 One of the "muscle man" images from the book

The frontispiece of De Fabrica shows Vesalius performing a dissection, centre stage playing to a packed house; it is literally standing room only and an entirely allegorical scene. Three large robed figures loom imposingly at the front, surely a nod to the ancient wisdom of Galen, Socrates and Hippocrates. Right at the epicentre stands Vesalius one hand on the corpse and the other pointing towards the heavens, a good move to be acknowledging God is on his team also.

Then in 1564, he has his annus horribilis and for the man with the surgical Midas touch, it all appears to go wrong. One story suggests he dissected a corpse who wasnâ€™t quite as dead as he might have been and possibly as a form of penance he was advised to do a tour of the Holy Land; a journey from which he would never return. A second possibility is that he fell foul of the Inquisition, causing this empirical man of science to find making the pilgrimage a good idea.

He dies in the same year aged 50 in mysterious circumstances on the Greek island of Zakynthos, his burial site and grave remain unknown. Unlike his working life, which is referenced with earth shattering evidence based medicine; his final year is shrouded in mystery. No monument or memorial depicts his final resting place. Perhaps the only epitaph needed is de humani corporis fabrica. Anatomy and medicine changed forever, his legacy lives even if his name and accomplishments have been lost to most.