What's next for Olympic sports?

There was a wonderful picture in the Times on Monday of Paul Collingwood celebrating ’s win over for the World Twenty20 cricket trophy, and naturally I immediately thought what a pity it was that cricket hadn’t made it into the Olympic Games pantheon. A friend of mine soon put me right on that misapprehension though, for cricket was one of the sports played at the Olympic Games of 1900. On that occasion, beat by 158 runs at the Municipal Velodrome in . An interesting account of the match by Ian Buchanan appears in the Journal of Olympic History, which is available on the LA84 website. This website, incidentally, is a wonderful resource for Olympics-related content in full text, including all the official reports of the Games going right back to the beginnings of the modern Olympics.

There is now talk of cricket in its Twenty20 form being included in the Olympics, as the IOC has formally recognised the International Cricket Council. It won’t happen until 2020 at the earliest, but that date would be really rather appropriate wouldn’t it?

The IOC’s website explains how the choice of new sports for the Olympics is organised. They say that:

‘To make it onto the Olympic programme, a sport first has to be recognised: it must be administered by an International Federation which ensures that the sport's activities follow the Olympic Charter. If it is widely practised around the world and meets a number of criteria established by the IOC session, a recognised sport may be added to the Olympic programme on the recommendation of the IOC's Olympic Programme Commission’

There is every incentive, as far as individual sports are concerned, to be recognised as ‘Olympic’. By taking part in the Games, they showcase their sport in an arena which provides them with undreamt of publicity and world-wide exposure. Not surprisingly, the IOC has a continuing number of difficult choi to make about which sports to include, and it is invariably criticised by the sports that don’t make it. Recently, rugby sevens and golf were approved for the 2020 and 2016 Games, with squash and baseball being passed over. In the wings, body building, cheerleading and bridge are putting forward their cases to be included, so will the Olympic Games ever be ‘full up’ and how will the IOC deal with the controversies that some of its decisions create? Not only does it have to justify the inclusion of one sport over another, it also debates ideas about which sports are appropriate for which sexes. I’ve often wondered why men can’t participate in synchronised swimming; and why women haven’t been allowed to ski jump, given that they are now entitled to box.

To purge or not to purge

At the time of the Beijing Olympics a lot of publicity was given to Michael Phelps’s astonishing intake of food, which came to over 10,000 calories per day, most of them in the form of carbohydrates. The BBC listed everything in awe-inspiring detail at http://news.bbc.co.uk/1/hi/7562840.stm and it struck me on reading it that the list flew in the face of the usual advice about the correct proportions of fats, sugars and proteins in the diet, and the importance of vitamin-packed superfoods like leafy vegetables and brightly coloured fruits. Clearly, Phelps’s first need was to cram down daily as many calories as was humanly possible, given his huge expenditure of energy in training and competition, but the report did get me thinking about how advice on nutrition changes over time. One of the pleasures of working here is that in the course of your work you run across all sorts of publications that lurk in the archive largely undisturbed, and while researching an article on early coaching books I became fascinated by the types of foods that athletes were recommended to eat.

Walter Thom’s Pedestrianism (1813) was one of the first books to be published on running (and walking). His ideas on coaching were adapted from those of the celebrated race walker Captain Barclay who was a folk hero in as a result of his feats of physical endurance. Captain Barclay recommended that a competitor train on beefsteaks, mutton chops, bread and beer, and laid stress on “a regular course of physic…(Glauber salts are generally preferred)” to purge the system. Exactly one hundred years later Sam Mussabini, the trainer of the Olympic gold medallist Harold Abrahams, was also putting his faith in the power of the purgative by providing a recipe for one of his own, namely “Epsom salts brewed up with liquorice, gentian root, camomile and ginger”. In these days of the advanced science of sports nutrition you don’t hear so much about ‘purging’. Will it ever come back into fashion?

The Complete Athletic Trainer. By S. A. Mussabini, in collaboration with

Pedestrianism; or, an account of the performan of celebrated Pedestrians during the last and present century; with a full narrative of Captain Barclay's public and private matches; and an Essay on Training.

The legacy of participation

Dr Gordon Mellor of the came in to the Library yesterday morning to talk about the work of his newly formed Department of Physical Education and Sport Studies. Over coffee we had a good chat about the ways in which the hoped-for legacy of enhanced sports participation in the wake of the London Olympics could be brought about. Clearly, there have to be many different approaches to the question of how to engage the diverse communities in the UK for there to be any chance of real success, and the experience of the London 2012 games is not enough on its own to make things happen, though it may well create an environment in which practical ideas can be addressed. There are already lots of local initiatives throughout the country which have been attempting to foster sports participation in their areas and it would be good to hear about some of these and find out about the lessons learned and what common denominators there are – if any. From the HE perspective, Bedfordshire’s Sport and Community Leadership BA Honours programme is an interesting attempt to address the issue by providing both an academic framework and practical experience for those wishing to pursue a career of this sort. Based on areas of study such as community and society; sport leadership and community cohesion; sport equity and sustainability, the course aims to turn out graduates with skills in developing active lifestyles at community level - particularly among disabled people, the elderly and those ethnic minority groups who have been resistant to messages about sports participation in the past.

On the Olympics website, we have a discussion about grass roots participation and government policy on community sport, accompanied by a bibliography of British Library resources http://www.bl.uk/sportandsociety/legacy/articles/grassroots.html 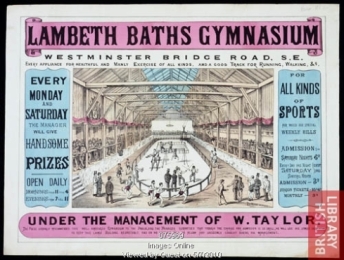 The picture above is part of the BL’s Evanion Collection and shows what purports to be a facility for local sporting activity in 1881, though there seem to be rather more spectators than participants! You can click on it to open a larger window in Images Online on the BL website.