Tied up in knots: brand protection and ambush marketing

The attempt of a Dutch brewery to grab the spotlight at the FIFA World Cup by dressing a group of young women in its promotional outfits must have sent shivers down the spine of the IOC, and one can see why. The financial sucs of sporting mega events depends on the willingness of corporations to pay huge sums for exclusive rights to market their products, and if the organisers can’t guarantee their exclusivity then the reason for spending such sums no longer exists.

The problem is that - particularly with the explosion of social networking and digital media - it's becoming increasingly harder to police the marketing pros. Not only are the venues themselves vulnerable, but the immediate environment of a mega event also poses potential problems. In 1996 at the Atlanta Olympics, Nike bought up billboards in the vicinity of the games venues and advertised its products, to the chagrin of the official sponsor of sports shoes, Reebok; so with this upping of the ante, it quickly became clear that the net of regulation had to become larger and larger. But where do you draw the line? The numerous attempts at product ambush at the Olympic Games have meant that the organisers have had to become more and more feverish in their attempts to safeguard their sponsors, and are frequently made to look ridiculous by their efforts to combat anything even remotely contentious. Each nation which hosts the Games passes legislation to protect the Olympics brand. The London 2012 Olympics for example, are protected by the Olympic Symbol etc (Protection Act) 1995

However, the point of sucsful ambush marketing is that it finds loopholes in legislation to circumvent the spirit of the law. This is why LOCOG’s brand protection document is such a detailed one.

There are two books in the collection which deal specifically with ambush marketing and its game theory. Fascinating stuff, but it’s a matter of life and death for the Olympics organisers, and their difficulties can only get worse (it seems to me).

I’ve just finished reading Janie Hampton’s fascinating book ‘The Austerity Olympics’ which describes the events surrounding the London Games of 1948.  The comment of Peter Kemp of BBC Radio 4’s Bookshelf, which appears on the back cover, prompted a rueful smile “it’s about putting on the Olympics in during a financial crisis”.

Books like this, and contemporary accounts of the 1948 Olympics, reveal a world in which technological change was only just beginning to pick up pace. The Athletic Review’s Olympic Games souvenir designated the 1948 games ‘A boffin’s paradise’ on account of the new technology that was about to be applied to the events, notably a remote-control starting pistol (whatever happened to that?), photo-finish cameras, electronic timing and ‘walkie-talkie control of the marathon’ (coincidentally, the ‘boffin’s boffin’ - Alan Turing - was in the running for a place in the marathon: he had a personal best over this distance of 2 hrs.46).

This Olympics can also be said to have inaugurated the era of mass broadcasting of mega events. The BBC produced a special broadcasting handbook for the occasion, to be used by the large influx of foreign correspondents. It gave them useful information about the arrangements for booking microphones and studios as well as details of which bus to take to the sporting venues (“There are frequent trains from Marble Arch on the Central Line to Chancery Lane Station and thence by Trolley Bus (routes 517 and 617) to Finchley Open Air Pool”)

The BBC Yearbook of 1949 – looking back on the experience of the Olympics - thought the Corporation’s efforts represented “the most ambitious undertaking in broadcasting history” which involved the employment of 200 engineers, the erecting of broadcasting facilities at 25 venues, and a total of 130 commentary positions, 500 amplifiers and 150 microphones. Impressive, but these arrangements seem almost pre-historic compared to the media centres created for the London Olympics of 2012 and its immediate predesors. These in their turn will probably seem ‘prehistoric’ to the Olympics consumers of the future.

What's in the catalogue?

One of the most interesting (and sociable) tasks involved in managing the Olympics website is that of meeting up with new people and encouraging them to contribute to the site. Apart from the external contributors, we’ve had two interns so far who have worked on the environment and politics pages, exploring our collections and making discoveries which have benefits for both the interns and the Library itself. Currently we have Jade McKenzie working with us for three weeks. She has just completed a psychology degree and is looking at the finer points of motivation in sport, in order to produce a bibliography of materials held by the BL which can then be added to the site. She will be searching across the range of different media that we have in the collections, including the sound archive recordings, which are increasingly being used in qualitative research.

It may come as a surprise that there are always fresh discoveries to be made in a Library that is now over 250 years old, but the collections are so vast (and constantly being added to) that even the most experienced curators hedge their bets when asked what we hold on a particular topic. Subject acs has obviously improved out of all recognition now that catalogues are searchable online, but even I remember when the British Library collections were subject-searchable only by dint of intensive detective work, allied to a knowledge of the sometimes arcane details of the British Museum Library cataloguing rules. In those days we were helped by printed subject catalogues and also by other people’s recollections of seeing something on a shelf somewhere, or recorded on a 5x3 card at the reference desk.

The British Museum Library subject catalogues could quite legitimately be the objects of research themselves and it is interesting to see how descriptions of sport, and the organising of its various subdivisions have evolved over time. ‘Sport’ in the earliest volumes of the catalogue consists mainly of books about the hunting of animals. What a good job our notions of sport have evolved from that sorry state of affairs!

Catalogues 'within' catalogues also have to be available online these days. The following poster of ‘the greatest lady swimmer in the world’ is not separately indexed in the main BL catalogue, being part of a larger collection of items, those of the Evanion Collection. However, you will pleased to know that the online catalogue of the collection, with digital images of many of the items, is available on the BL website by selecting ‘Evanion collection of ephemera’ from the menu under ‘catalogues’ 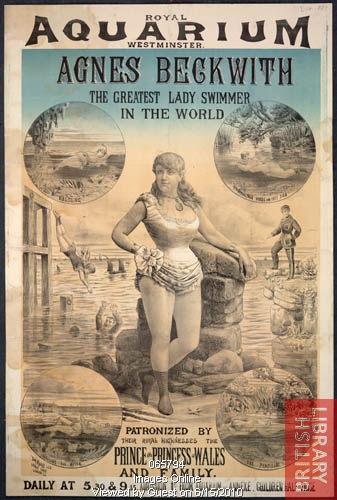 The Olympic mascots of the past have usually been animals specially associated with the Olympic city, and you can understand - in a world culture saturated in Disney - why this option might appeal to Games organisers. If had taken this route, what might the 2012 mascots have looked like: lions maybe, or sparrows; pigeons, or urban foxes? In the end, it’s probably easier to create something new and avoid the clichés. Wenlock and Mandeville are certainly new, and in their electronic form at least, they manage to be cute without being fluffy. The video on their website also gives them a context, which makes them even more appealing, particularly from a child’s point of view. In short, I like them, though I doubt if anyone wearing those outfits will be able to bounce about with quite the same vigour as the bear at the Berlin world athletics championships. Maybe some intelligent tailoring will have to be employed between now and 2012 to make them less clunky and more mobile in the ‘flesh’. http://www.london2012.com/mascots

The perils of coming up with an idea for a mascot are many and varied, so I feel for LOCOG in their attempts to please everyone (or indeed anyone), especially after the criticism they received for the 2012 logo. As for the names, they’re a timely reminder of the role GB has played in inspiring the modern Olympics and Paralympics. Much Wenlock is of course the town where William Penny Brookes organised the first modern Olympic Games in 1850, and those Games still take place every year. If you wish to know more, the Much Wenlock Olympian Society has an informative website at http://www.wenlock-olympian-society.org.uk/ and the BL has a copy of:

Mandeville owes his name to the pioneering work of Sir Ludwig Guttmann with spinal injury patients at the . Believing in the value of sporting endeavour to improve the physical and mental condition of disabled patients, Guttmann organised what was to be the first Paralympic Games in 1948.

Stoke Mandeville road to the Paralympics: fifty years of history

The interesting thing about the initiatives at both Stoke Mandeville and Much Wenlock is that their originators were inspired by a desire to pursue athletic and moral excellence through peaceful competition. The line of descent to the modern Olympic movement is therefore unbroken.

By the way, does anyone remember World Cup Willie? (I can even remember his song).