I’m much interested at the moment in the Special Olympics, and how this organisation fits into the Olympic movement more generally. For those not in the know, the Special Olympics gives people with intellectual disabilities the opportunity for athletic competition, and it was founded by Eunice Kennedy Shriver, the sister of Robert Kennedy and JFK, and also of a mentally disabled sibling: Rosemary. The movement – which she founded in the 1960s - is now world wide, covering some 180 countries and 3.1 million athletes, aided by 300,000 coaches and 750,000 volunteers. The organisation holds world, regional and national sports competitions and oversees a network of national programmes, the aim being to encourage people with intellectual disabilities to improve their health, and gain confidence and skills through sport. The volunteer programme, and the policy of encouraging the athletes' families to get involved as well, serves to broaden the movement’s appeal still further, and the publicity generated will hopefully lead to a raised awareness more generally about the abilities and rights of this community.

The IOC officially recognised the organisation in 1988 and Special Olympics is actually the only body authorised by it to use the word "Olympics" worldwide - no mean achievement by any standards!

For some people, sport appears trivial; something to be avoided on the back pages of newspapers. But as a tool for social inclusion and personal realisation it seems to work almost better than anything else. I blogged a few weeks back about how the UN is putting faith in sport as a development tool, and here’s another example of its power.

There aren’t a huge number of books about the Special Olympics in the collection (though there are doubtless some articles in journals that I haven’t tracked down yet). Here’s hoping that much more is written about this fascinating subject.

An interesting talk was given last week by the curator of the BL’s philatelic collection David Beech, in which he talked about ‘philately’ as opposed to ‘stamp collecting’; the point being that postage stamps and other postal artefacts can be seen as a research resource providing a fruitful source of information about the times and circumstances in which they were issued. The BL has a large and extremely valuable collection of philatelic items http://bit.ly/cR7u6R, second only to the collection of HM the Queen. There are some 8 million items in all, and there are numerous examples of stamps featuring sport and sporting events; and most particularly the Olympic Games.

Some are wonderfully colourful like the Stockholm Games stamp of 1912: 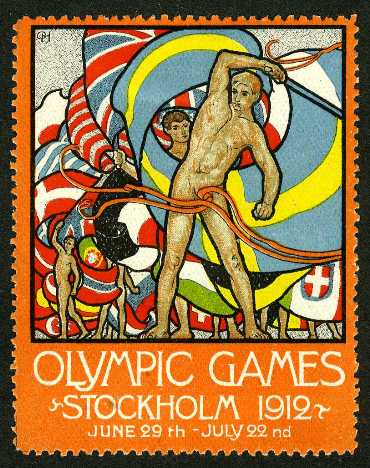 Some are of great historical interest, such as the 1936 Berlin Olympics stamp which shows a runner with an Olympic torch (1936 being the first time the use of a torch was introduced into the Games): 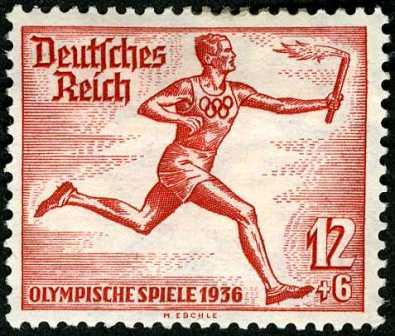 Another set of stamps are real curiosities in that they depict a Games which never actually took place - the Berlin Olympics of 1916 which was prevented by the First World War: 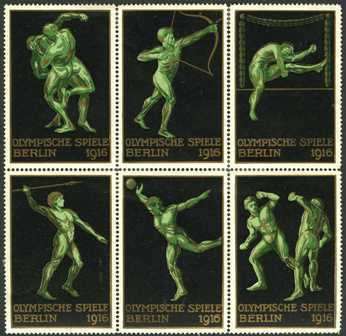 The IOC has always taken a great interest in the stamps produced to commemorate the Olympics, and has a web page devoted to these and other memorabilia http://bit.ly/9oA8tb. It tells us that the issuing and sale of special stamps in 1895 made it possible for the Organising Committee to balance its Athens Olympics budget and construct the last four venues for the events themselves. As the IOC describes it:

Collectors of such stamps have formed a global association called the International Federation of Olympic Philatelists (FIPO) which caters specifically for devotees of this sort of material and who eagerly await the issue of stamps for the winter and summer Olympic Games.

Sunday was the day of the Royal Parks half marathon and saw Yours Truly progressing in not quite stately fashion round the beautiful course, which takes in numerous London monuments and green vistas. Half way round I was glumly contemplating the impossibility of managing a full marathon next year, and this led inevitably to admiring thoughts about athletes capable of running over 26 miles in  close to two hours. There is no half marathon event in the Olympic Games, but the full marathon has more than made up for this as far as human interest, and controversy is concerned. Everyone remembers the 1908 event when Dorando Pietri was helped over the finishing line and then disqualified, but there are numerous other incidents involving the race since then such as the debate about the exact distance to be run (this changed several times in the early years of the modern Olympic Games); the arguments about the right of women to do this distance (women were finally able to compete in 1984); and currently the fuss surrounding the change of route for London 2012. The revised route now starts in the Mall and goes past all the principal London landmarks such as the Houses of Parliament and Buckingham Palace instead of taking in parts of Tower Hamlets - to the dismay of the inhabitants of that Olympic borough.

Of course, when the Olympic marathon was first run in 1896 the extraordinariness of the event was felt by everyone. It seemed an impossible distance, accessible only to incredibly gifted athletes. Now of course, the bloke next door does it, dressed as a gorilla, so one wonders if it’s time to incorporate in the Olympic Games the next stage in endurance running – the Ultramarathon - which can stretch to 100 miles or more. I wonder what route would be decided for this if it took place in 2012?

Below are some interesting contemporary publications from the collections, about the Olympic marathon of 1908 (including a piece of music celebrating Dorando). To which is added what looks like an intriguing forerunner of the London marathon, the ‘Evening news marathon race’

The 1908 Olympic Games, the great stadium and the marathon : a pictorial record  [compiled by] Bob Wilcock.

Manchester – looking its best in bright sunlight – was the setting on Monday for the conference ‘Will citizen media take over the Olympic Games?’ organised by Andy Miah, Professor in Ethics and Emerging Technologies at the University of the West of Scotland. The conference attracted people from all over the world, many with experience of reporting on sporting mega events from a citizen journalist perspective. Ruth Mackenzie – the Director of the Cultural Olympiad - was there, as were academics, journalists, and providers of social media platforms.

What came across very strongly was the vitality and excitement generated by social media and the opportunities it offers to citizen journalists, as well as keen anticipation of the different perspectives that this would bring to the London 2012 games. It was also rather overwhelming for someone like me, who was there – as usual - to plug the archiving aspect of all this. Hearing tell of all the projects already under way brought on a bit of a panic attack. What was going to happen to all this marvellous stuff when the games were over? Had people thought about the issues involved in archiving it for future research use, or would it all just disappear? Gulp!

Citizen journalism has the power to be inclusive, to promote ownership of events, to shine a light on viewpoints that contribute to a holistic view of what’s happening in the world. It’s also immediate, unmediated, and spontaneous: the wildcard - if you like – in the London 2012 media pack. It has already taken giant strides both technologically and organisationally. However, have we really got to grips with capturing it for the long term; with its legacy in other words ? Yes, here I go again!

We hope to look much more closely at citizen media on the Olympics website and get some contributions from the movers and shakers. In the meantime catch some of the fascinating presentations on the twitter feed for the event at:

References from the BL collections

Gant, Scott E. We're all journalists now: the transformation of the press and reshaping of the law in the Internet age New York; London: Free Press, 2007