To take it or leave it?

The announcement last week about the opening of the London 2012 anti-doping laboratory seems to have moved the focus of current media scrutiny away from Olympic security and towards the problem of cheating. Interest in the latter has always loomed large in academic research, however, not only from a scientific point of view but from a sociological one too. The London 2012 laboratory, based in Harlow in Essex, is equipped, we are told, to analyse over 6000 samples (a record for the Games), so the message emerging is that the issue is being taken as seriously as ever by practitioners. The questions are though: how sophisticated are the weapons being brought to bear on cheating, especially in this age of genetic modification, and should we be short-circuiting the problem by taking a fresh look at the ethics of doping?

One of the suggestions being tentatively tossed to at fro in academic circles centres on the idea of actually legitimising the use of performance-enhancing measures, and there are several arguments for this: it would mean that the escalating race to keep athletes ‘clean’ would cease to be an ever increasing burden on the authorities, and the effects of supplements on athletes’ health could be properly monitored in the  long-term. One of the principal supporters of this line of reasoning is Professor Andy Miah of the University of the West of Scotland who has published a number of books and articles on the subject. His argument is that regulated ‘enhancement’ is a legitimate practice for improved athletic performance, and that the sports authorities have something of a moral duty to ensure that enhancements are safe to use.

The struggle for ‘clean’ athletes is being waged on many different sporting fronts: in baseball, in cycling, in weightlifting. And there’s nothing new in the use of performance enhancing substances. In the 19th century people took small doses of strychnine with brandy to aid endurance, and as time went on more and more artificial aids became available: amphetamines, steroids, even transfusions of blood with high levels of red blood cells. Nowadays the range of potential ‘procedures’ is even wider, and often increasingly harder to detect.

The arguments against the legitimising of performance enhancing substances are powerful. They are allied in some ways to our attitudes to recreational drug use which seek to prohibit it on the grounds of the extreme harm it can do. However, we are currently losing that battle too, giving rise to calls for a decriminalisation of drug use. If athletes want to take performance enhancers they will find a way to do it, it is argued, and perhaps the best way of tackling the problem is to leave the onus for the decision on the individual. This would probably lead to a breakaway movement of ‘clean’ athletes – as has happened in bodybuilding – and a re-evaluation of our attitude to what sporting excellence actually means.

Still, I can’t overcome my feeling that taking performance enhancers is wrong and that the messages such actions send out are wrong. If we regulate certain drugs for use because they are safe, how do we control the ones that are not? Aren’t we back with the same old dilemma again?

Verner Moller The ethics of doping and anti-doping: redeeming the soul of sport

“Critics of the London Olympics were today urged to get behind the Games and ‘stop grumbling.’” Thus reported London’s Evening Standard, on 9 February 2012.

The peremptory invitation was issued by Culture Secretary Jeremy Hunt who—to quote him in full—said: “This is a year to celebrate and not for grumbling. We have got the chance to show the world everything that is best about London. We would be crazy [sic] not to make the most of it. Of course there is going to be disruption. But it’s going to be worth it.”

Obliquely, my mind went to the First Amendment of the U.S. Constitutions. This is the clause which protects important freedoms; freedom of religion, freedom of speech and, by implication, freedom from religion. Have the Olympics acquired religion-like status? Are we all being asked to believe? More importantly, are we being forbidden to disbelieve or to simply be agnostic?

Perhaps, Secretary Hunt’s declarations needs a bit of deconstructing and a close reading. Let us begin with the first sentence: ‘This is a year to celebrate and not for grumbling.’

Two attitudes, one positive, one negative, are juxtaposed: ‘celebration’, which entails happiness and other positive feelings, and ‘grumbling’, which implies a bad temper on the grumbler’s part and—to an extent—lack of real justification. So on one side stand the ‘supporters’: rational in their belief; positive in their attitude. And on the other the ‘grumblers’: irrational, unwilling to play the game (the sport metaphor seems particularly apt), and—quite simply—party-poopers.

But there is more: not standing firm behind the Games is “crazy”; ergo one must be insane not to see what great opportunity these Olympics are going to be for London and for Britain. But if you’re sane—the reasoning goes—you can’t fail to see that the minor disruptions that will inevitably be experienced are well worth putting up with. For the greater good, of course, and what will turn out to be a fantastic, unmissable, once-in-a-lifetime (you can add whatever other positive adjective springs to mind) event. No pain no gain, to use other phrase beloved of — among others — sport coaches.

From the organisers’ point of view, it’s understandable that they should want the event to be a great success and for London and Britain to shine, not only in terms of medals gained. Like for other mega-events, we won’t really know how the system will cope until after the last athletes and visitors have left. My guess, for what it’s worth, is that—overall—things will turn out the way they’re meant to. And the closer we get to the opening ceremony, the more excitement we’ll see and most people will be caught up—at least temporarily—by the excitement.

However, it is a fact of life that watching sport—of any kind, at any level—is not enjoyed by everyone. And this is for a variety of reasons, all of which legitimate. If sport is like a religion, and the Olympics one of its principal rites, then I would suggest leaving people the freedom to believe, disbelieve, or simply not care, or care just a little.

Now that 2012 is finally upon us we can all abandon ourselves to the contemplation of sport – at least that’s the plan!  And not just Olympic & Paralympic sport, but sport more generally, given that the British Library has a wonderful collection of sports research resources which illuminate leisure pursuits in the United Kingdom (and elsewhere) right from their very beginnings.

With this in mind, I and my colleague Philippa Marks (from the Arts and Humanities section of the Library) have been pushing ahead with plans for a one-day conference in May this year which will, as we are saying in our marketing literature “ unlock the secrets of the British Library’s sport collections”

We have recruited British Library curators from right across the Scholarship & Collections directorate to talk about resources which might interest sport (and indeed other) researchers. There will be a chance for participants to find out about oral histories of sport, sporting ephemera, serial and monograph publications (old and new) and see some wonderful images culled from a variety of British and foreign texts. The rationale behind the conference is to share with the audience the excitement that the curators feel when discovering a fascinating resource that has been lurking in the collections (perhaps unread) for many years. Here’s one visual gem: 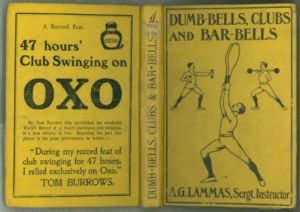 The Library’s resources, vast and varied as they are, reveal new discoveries every day.  Some subjects are well mined by research, but sport – comparatively speaking – is not, although research in this area has certainly burgeoned over the last 50 years. So we hope the conference will be instrumental in stimulating new ideas,  particularly for those who want to look at sport from unusual angles and who relish the idea of ferreting around in the collections.

To add to our intellectual gravitas we have attracted 4 wonderful academic speakers who will be giving the audience a glimpse into their own research and the resources they use. Hopefully this will be a learning experience for all concerned. The curators, in particular, love to know what use is being made of the collections, and also what materials people are keen to see being collected.

Details about the conference will be available soon, on this website and elsewhere, so please watch this space.

A new headache for the IOC.

Over the years the IOC has been faced with a number of nightmares concerning their elite athletes– from shamateurism to drug taking and gender ambiguity. These threats to the Games’ integrity have been dealt with in a number of ways with varying, but mostly satisfactory, degrees of success. The latest nightmare though – that of the possibility of bribery of athletes by betting syndicates – has caught quite a few people on the hop. How do you legislate for (or rather against) such a thing?

The issue of match fixing suddenly appeared on most people’s radar last year after three Pakistani cricketers were convicted for ‘spot’ fixing in a Test match against England in 2010. Evidence put before the court highlighted the illegal betting syndicates in the Far East, India and Pakistan which attempt to skew the outcome of sports matches in a variety of ways: by arranging for individual players to commit ‘faults’ like no balls, right up to the throwing of entire games. Unregulated and with large sums riding on the outcomes, they pose a huge problem because of the sophistication of their methods and the clandestine nature of their activities.

A big expose in the Sunday Times on New Year’s Day revealed the extent of the problem for Olympic sports: football, tennis, & handball have all been shown to be affected and there are strong suspicions about hockey. The claim is also made that syndicates are already preparing for the Games with plans which will potentially involve not only athletes but match officials as well. Olympics minister Hugh Robertson is reported as saying that “ Governments around the world need to put the necessary laws on their statute book that make…[match fixing]…illegal.”

As with the financial markets, the success of sporting events depends largely on confidence. No one would be interested in a ‘competition’ that had a prearranged outcome, and this is the reason sporting authorities come down heavily on cheats. The possibility of the match being fixed robs the whole event of its meaning and renders genuine achievements suspect. People quickly become disillusioned and sponsors want no part of it. That way lies complete disaster – for the Olympics and Paralympics in particular.

With this dire possibility in mind, the London 2012 authorities have set up a special task force composed of representatives from the Met, Interpol and the Serious Organised Crime Agency. The task force will share information and monitor any unusual betting activity, and identify attempts to approach athletes by persons known to be linked to the syndicates. People will also be able to report any suspicious goings-on via an email hotline. The problem though - it seems to me - is that even more legislation and surveillance will be necessary at mega events, thereby giving ammunition to critics who are already accusing the Games of being too prescriptive and intrusive when it comes to domestic affairs.