As with every great performance, the months immediately before the actual event are taken up with rehearsals at which unforeseen problems are sorted out and people are allowed to make as many mistakes as they like, in order – hopefully – to get them out of the way before The Day. Not far from the BL – at the old Aldwych underground station to be precise – the security forces are currently engaged in carrying out a disaster scenario (which we devoutly hope won’t turn out to be a prelude to an actual event); much further away a happier rehearsal will be taking place in a month or so’s time – for the London 2012 torch relay. In April the torch will be taken on an 80 mile trial run from Leicester to Peterborough in preparation for the real thing, which actually begins on the 18th May when the flame arrives in the UK from Greece.

A lot of imagination has gone into determining the course taken by the Olympic torch once it reaches the UK: it will use a variety of means of transport, from the chair lift at the Isle of Wight Needles (where I went for my hols last year so I know this will be a picturesque event) to a boat across Loch Ness (with plenty of scope there for a monsterous – and purely incidental - surprise).

The Olympic flame is obviously full of meaning for the Olympic movement, as it is one of the symbols which has made the transition from the ancient Games to the modern. The concept of the sacred nature of the flame and the significance of those who bear it is central to the Olympic idea, although the torch relay itself is a modern innovation: it was first instituted at the Berlin Olympics of 1936 (the torch used on that occasion is shown below) 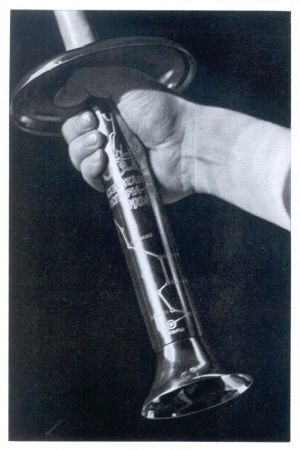 Although forming a vital part of the complex ceremonial of the Olympics and Paralympics, the torch relay has developed something of a raison d’etre of its own, in terms of the effects it may seek to create and the meanings with which the host countries invest it. The final team of torch bearers is chosen by the organising committee of the host country, and that choice can be founded on a number of factors, and indeed operates very much like a mini ‘honours’ system. The types of people considered worthy of the honour have expanded hugely since the original procedure was set up. Nowadays, the torch bearers need not necessarily be great athletes, but those who have contributed in some other way to the well being of the country or district concerned; so as well as fulfilling its original purpose of alerting the world to the imminent arrival of the Olympic and Paralympic Games, and bringing the flame from Athens to the host city, the relay provides another means of reinforcing national pride and inclusiveness and of promoting the host nation to the world. Dramatic and beautiful scenery is chosen for the route and unusual means of transportation are often organised. The whole process is increasingly one which has wide non-sporting resonance. Lately, of course, we have seen the relay (especially in Beijing) become the focus of both international and national protest – a testimony perhaps to the power of the event itself – with all the logistical implications that this has for the organisers.

So nothing about the Olympics and Paralympics is simple, especially now that information technology has transformed ‘global’ events into 'local' ones.