Voices from the past

It wouldn’t be exaggerating at all to say that excitement is mounting exponentially here, in anticipation of the rapidly approaching Olympic Games. This morning saw the press launch of the Olympex exhibition at the British Library which shows a fascinating collection of postage stamps, postcards and other memorabilia relating to the London Games of 1908, 1948 and 2012.

Visitors can see a 2012 torch and torch-bearer’s uniform, numerous wonderful images and films from the vast collections of the IOC, listen to the recorded voices of British Olympians, and play with an amazing electronic version of the exhibition, the software for which has been developed by the Library itself. Outside on the piazza a booth where people can buy Olympic stamps and send cards is rapidly taking shape, and there’s a definite buzz, here and in St Pancras station, where numerous non-accredited press representatives wearing large badges and heading purposefully towards Russell Square can be spotted round every corner.

The celebrations almost seem to be taking on a life of their own, touching every aspect of London’s life. The athletic events seem like only one tiny part of it, and quite far away. However, the Library is now an official Olympic space, and we have the flag outside to prove it (solemnly raised at 1pm today). 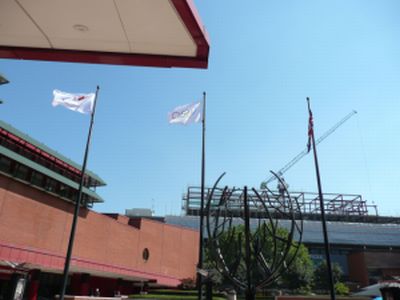 The voices of the Olympians at Olympex are of particular interest to us because – unlike the Olympex exhibits themselves which belong to private collections - they are drawn from the British Library’s own oral history archive. This resource, which is of enormous - and increasing - interest to researchers, covers a wide range of subjects from Jewish history and politics to the history of medicine and industry, and it also includes a number of recordings of sports people. These have been collected over the past twenty years and comprise interviews with track, field and road athletes as well as tennis players, fencers, canoeists and swimmers. Also included are unique interviews with those involved in the coaching of sport as well as those who witnessed historic sporting events such as the Berlin Olympics of 1936.

The Olympians’ accounts are fascinating: Dorothy Tyler, who won an Olympic silver medal in the high jump in 1948 speaks of her experiences then, and also in Berlin in 1936, when there were chaperones to ensure that moral decency was observed. Bill Roberts, who also went to Berlin to compete, sensed a threatening atmosphere at these Games and speaks eloquently of the antipathy of the British team to the Nazi regime. What comes across in all of these accounts is how relatively unsophisticated the whole process was in those days: training for the Games was not centrally organised, and the athletes themselves bore many of the costs of competing. Dorothy Tyler explains that in 1948, at a time of austerity, competitors were housed wherever space could be found, often in army or air force barracks – clearly, the Olympics of the immediate post war period led a remarkably hand-to-mouth existence. Hearing these things reminds us just how explosive - in terms of its organisation and bureaucracy - the development of the Olympic idea has been since those much simpler days.

The good news is that these interviews, and many others, have now been put online on the Library’s website for everyone to hear.