Confessions of a Dove Biker

One morning, just over seven years ago, I received the most welcome cup of tea in my life.  It had started as a normal journey to the Library - a 24 bus from Pimlico, and then hoping onto a 30 at the top of Tottenham Court Road - but that morning, 7 July 2005, the morning after London had been awarded the 2012 Olympic Games, the bus route got messed up, and I ended up walking towards the Library through Bloomsbury.  You know the rest of the story.  Because of the bombings, the final bit of the route to work was blocked off, there was an exploded bus at the end of the road, smoke on the ground, and people in tears, running.  Friends House opened its doors, gave people a chance to call family and work, and offered a cup of tea.  As I said, it's the most welcome one I've received.

I bought a bicycle the next day, something I had been meaning to do, but was precipitated by that week's transport problems.  Seven years and three bikes later, I was cycling around the Olympic Stadium, dressed rather improbably as a dove and bobbing up and down to flap some illuminated wings.  Oh, and retro-quiffed Arctic Monkeys were playing a cover version of The Beatles' Come Together.

There's a path that can be picked out between these two surreal moments (one horrific, one rather glorious), something highlighted during the opening ceremony by the Abide With Me section.  It's a story strikingly illuminated by an interview with a medic, Andrew Hartle, who treated some of the victims of the 7/7 bombings, and volunteered to be part of the Olympics medical team. For Hartle, the Opening Ceremony proved to be a turning point.  As he told The Telegraph,

I did it because there was part of me that wanted to be involved in this and make it good, to make up for 7/7... It was really important to me that the Olympics worked, that London could demonstrate that it was about something other than 7/7. That we could deliver something brilliant, to be proud of. We don’t do pride very often, and I think we should.

Watching the opening ceremony, 'There was a sense of calm and real excitement. A sense of closure. The Olympics were here. They were cathartic. The anxiety had gone. London was not about 7/7 for me any more.'

In this, and a thousand other ways, the London Games tied together personal and the public, the individual and the national.  The Ceremony, it seems, also acted as a fulcrum, shifting the national (or at least the London) mood from one of indifference or cynicismto something else, something that has been worked over by commentators from across the political spectrum.  The confidence, humour and perhaps unexpected success contrasted greatly with the summer riots of the preceding year, as Dizzee Rascal noted in Time Out, while also drawing attention to the continuing deprivation experienced by many living near the Stratford stadium.  The task for the social sciences, it seems to me, is offering the tools to record and investigate these processes and tensions at a deeper level than that offered in the pages of the press and opinion pieces.

Another potential PhD topic would be (if it's not too late), the anthropology of the volunteers that underpinned much of the Games' success.  What motivated them?  What did they get out of it?  How did it change, if at all, the way communities saw themselves?  To what extent did it stop people 'bowling alone'?

As a Dove Bike, my responses will be biased.  For what it's worth, I spotted a call for cyclists 'with upper body strength' on the Lfgss.com forum. (It was also posted on British Cycling.)  Ignoring that muscular requirement, and taking the view that if the Olympics were going to happen one might as well make the most of it, I signed up and attended an audition at 3 Mills early in March.  A hundred or so cyclists, many in team kit, where there. We were asked to ride around, bob up and down, and cross through each other, all in front of video cameras.  Like any groups, it soon took on it's own character, with plenty of humour, sarcastic asides, suggestions from the volunteers, and a growing sense of curiousity and interest in what the opening ceremony might be.  How naff would it be to just have a bunch of bikes cycling round in circles?

I received a callback in late May, with some of the rehearsals already underway. These took place in a certain amount of secrecy at Dagenham, inside a big top tent, and on one of two staked out stadium, or 'field of play', as we soon came to know it.  The commitment required soon became apparent: most weekends, some evenings, and a lot of time waiting around in the cold and rain.  Many people were travelling a long way, some were also volunteering as Gamesmakers, and, among the cyclists, were trying to fit their usual training in.  But once Danny Boyle showed us the 'pre-visuals' - a remarkably accurate computer animation - we were sold.  Not only would we get to ride our bikes in the stadium, getting a sneak peek inside the greatest show on earth, but we'd be doves, just before the lighting of the cauldron (avoiding the risk of setting alight any real feathered friends).

We weren't the only bikes involved.  Many acquintances and friends from across London had also signed up and were being rehearsed for the 'Bike AM' section, which would precede the doves and celebrate the UK's cycling culture.  Bob Haro, who had worked in the BMX scenes in E.T., was helping to set up an extraordinary BMX and flatlander section, and others were pulling large metal 'fire bikes', with gas cannisters in their baskets.  In between all these would weave a 'peloton' dressed in the Olympic colours.

The BMXers hung around looking cool, the firebikers perfected their towing, the peloton practised their pace lines.  And we got used to flapping our wings.  In July we moved to the Stadium, getting used to the 'M25' which ran around it, timing our lines going up the hill in front of the Tor, and, once we had perfected, our routine, practising all the things that go to make up such a large show - the lighting, the process of getting there (from over a mile away at Eton Manor, where our flock was cooped up for hours with hundreds of other performers), the TV sight lines.  We also got our wings bit by bit.  First the jerkin, then the frame, then the lights.  Finally the feathers and tail.  We also got used to riding around on very ropey hybrid bikes.

It was surprisingly emotional, perhaps for some of the reasons outlined above, as well as the need for secrecy (something that wasn't stressed, but we all took onboard), but also when we sat at the start of one of the rehearsals, and noticed that there were no other bikes: Danny Boyle came up to explain that the show had to be cut to ensure that everyone could get home on time. He refused to let go any of the volunteers, but only cut the paid performers (the BMXers, the peloton, and the firebikes were paid for insurance reasons).  Only our section remained.  So, on the night, we rode in part for the peloton and the other bikers.  And, just before opening night, a section of clips was released from the dress rehearsals.  It included, it seems without being authorised, clips of us cycling around.  After months of telling no-one what we were up to, many found it surprising.  Our self-generated Google Group and that evening's rehearsal was for a while in quite a flap.  But one comment by one of the doves got us back on track: 'Let's make the athletes, Danny, Ben, Bob, Paul, Sara, Solomon and all the stage management/costume/make-up/technical people etc, plus our families and friends VERY proud. Let us welcome the athletes and the flame for the Olympics in London and make sure everyone in the whole world forgets to breath for those few seconds because of their sheer amazement. LET'S GO AND DO IT! Bring it on!'

Then, it was Opening Night. The atmosphere was different, slightly tense, slightly serious, until we saw the Industrial Revolution segment play out (we had brought in a projector and laptop and used the wifi to watch a stream of the show as we waited around) and the performers came back to Eton Manor, elated, and high-fiving us as they went.  Our call came, and we marched two-by-two to collect our bikes and wings from underneath the stadium. Coming towards us were thousands of other performers, all 'coo cooing' and cheering, having the time of their lives.  On the left were the athletes making their long way into the stadium.  We tuned our earpieces into the floor manager's channel, got our wings, and lined up outside.  Six Billion pieces of paper, representing every man, woman and child on earth were dropped into the stadium and fluttered down towards us, like a snowstorm; Bowie came on over the radio, Team GB marched on, and then the Arctic Monkeys began to play.  We turned on our lights, began to flap, and waited for the signal.  Then, we rolled off, at 9 mph to do our circuit.

For me, it was just like the many other rehearsals.  The music was so loud in my earpiece, I couldn't hear the crowd.  I just kept focussed on the wheel in front, and did my best to bring up the rear (I was the last dove) and keep in position.  Everything was blue, white and black. Then, as we stopped, flapped in time, I could look around.  Thousands of athletes were grinning, taking photographs.  And our aerial performer was flying up towards the Tor end of the stadium (his beak painted yellow, rather than orange, on our suggestion, in honour of Bradley Wiggins, whom I suspect Boyle had wanted on the bike).  Our call came, we cycled through the 'vom' (vomitorium, architecture fans).  A nice moment: the walls were lined with the crew - costume, sound, lighting, TV - all clapping and cheering.  Somehow we - all of us - had pulled it off. 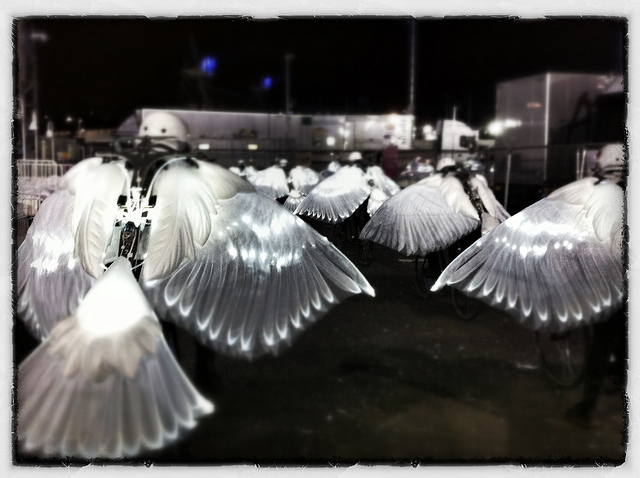