In Service of Their Country: The Pigeon Manual

In recent weeks stories of the humble carrier pigeon have made the headlines on a number of occasions. The first was the rather macabre discovery of the skeletal remains of a World War Two carrier pigeon in a chimney breast with the canister containing a coded message still attached. Later, another story of the exploits of the US carrier pigeon Cher Ami appeared on author Giles Milton’s blog.  He described how the pigeon saved a pinned down U.S. battalion during the First World War.

Considering this recent flurry of pigeon activity, it might be appropriate to mention our item of the week (for the week commencing 17th December) which is the Royal Air Force, Pigeon Service Manual HMSO,1919. [BL Shelfmark: B.S.35f/12]. This thirty-two page pamphlet from the Library’s rich collection of British Official Publications was written to inform and educate RAF personal 'specially on the use of pigeons from aircraft not contained in the ordinary text books on the subject of racing pigeons.' 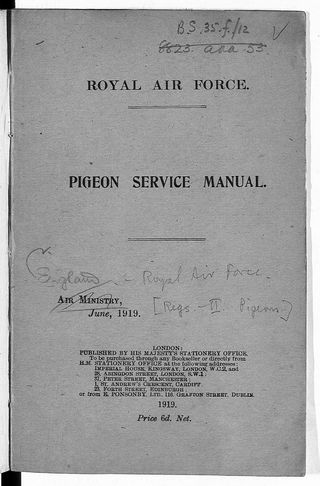 What this manual illustrates is the level of importance that the humble pigeon had for the military. The main role of the RAF pigeon service was to convey messages when other means had failed or were unavailable. One obvious use was for downed aircrew as a means of notifying authorities of their whereabouts. The pigeon service was integrated into the wider communications infrastructure at the time. In the event of a pigeon failing to make it back to its loft after release, instructions were given that a message should be passed on to the Air Ministry as a matter of 'urgent priority' via a telegraph communication  from the Postal Authorities. 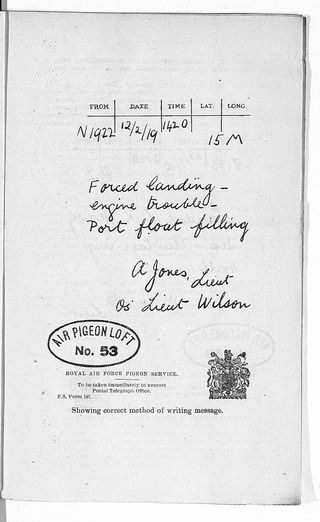 It appears that the pigeon was a most successful mechanism for delivering these messages of last resort. This manual cites a failure rate of around five percent which was mainly accounted for by 'ignorance of the pigeon’s capabilities' among the aircrew attempting to release the bird. Hence, the manual goes to great lengths to urge the readers to familiarise themselves with the proper procedure for handling and releasing birds. The manual emphasises the importance of the correct handling of pigeons with a cautionary tale of a crashed aircraft: the pilot lost both pigeons while attempting to affix a message to one of the birds and he and his passenger were only saved by the fortuitous arrival of a passing patrol boat.

This manual starts and finishes with anecdotes of heroism which show how these feathered messengers saved human lives during conflict. The introductory remarks leave the reader in no doubt of the importance of the carrier pigeon, whose 'service has been of inestimable value'. Ultimately the pigeon’s valour was recognised in official circles in 1943  after the creation of the Dickin Medal, to honour the deeds of animals at war. In the years following its  launch, thirty-two pigeons were singled out and awarded the Dickin medal for 'heroic' deeds. 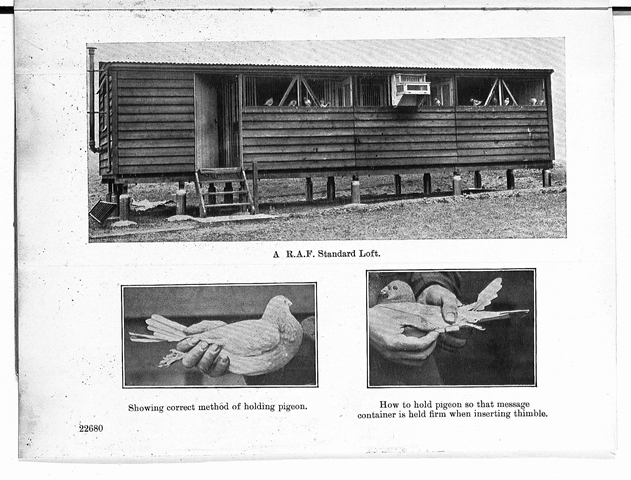 Images from the Pigeon Service Manual

The Pigeon Service Manual is part of the collections which are being digitised for the Europeana 1914-1918 project. This initiative will build a collection of materials from across Europe to commemorate the centenary of the outbreak of World War I. The British Library will be contributing in the region of 200,000 digitised images of collection items to the project and all of these including the Pigeon Service Manual will be available through the Europeana portal by the summer 2013.

From the Official Collections comes an insightful Air Ministry manual on the use of pigeons by the RAF. Royal Air Force, Pigeon Service Manual HMSO,1919. [BL Shelfmark: B.S.35f/12]