This guest post from Stephanie Minchin highlights some of the discussions on ‘Addictive Personality’ as presented at the British Library’s ‘Myths and Realities’ public debate on 18th March, 2013; with  Prof. Phil Withington, Prof. David Nutt and Prof. Gerada Reith, reflecting upon what drives addiction.

As part of the ‘Myths and Realities’ series of public debates the British Library was host to Professor Gerda Reith, University of Glasgow, Professor David Nutt, Imperial College London and Professor Phil Withington, University of Sheffield who discussed and challenged the myths and assumptions attached to the concept of addiction. The event was chaired by Claire Fox from the Institute of Ideas who questioned the notion of an addictive personality with the term that society may be a nation of ‘addiction addicts’.

Prof. Phil Withington introduced the debate with ‘Addiction – an early modern perspective’. The language of addiction from the 16th and 17th century was described in the depiction of a cloth worker in 1628 as being “overtaken with drink”. The point was raised that the way we consume and think about intoxicants is reflected in the understanding of ourselves and where we come from. Therefore, it seems to some extent that today’s perception of addiction reflects the same as the early modern roots. Prof. Withington accounted for a historical perspective of intoxication and capitalism, such that substance use grew into a big business as an important feature of international trade in the industrial revolution; organized import and export allowed for the transfer of intoxicants (tea, coffee, chocolate, opium) as durable and profitable substances. The language from the renaissance period to today has also increased in the number of words used to describe the meaning addiction. Samuel Johnson’s (1740) reflection “he addicted himself to vice” still holds meaning today. 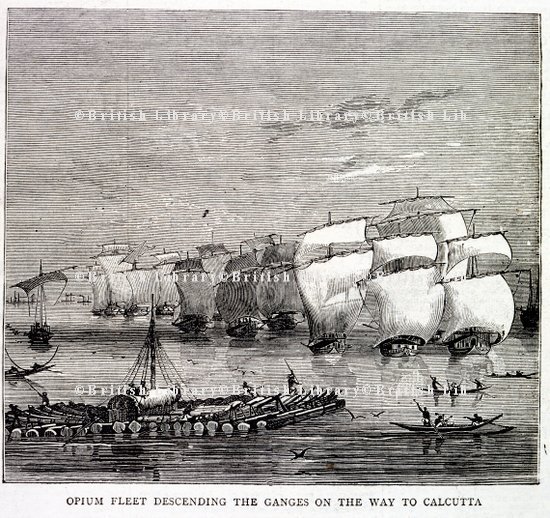 'Opium fleet descending the Ganges on the way to Calcutta'. Image taken from The Graphic. Originally published/produced in London, June 24, 1882. © The British Library Board

Following from Professor Withington’s portrayal of the language of addiction, Professor Nutt began with the translation of the Latin verb ‘addictio’ meaning ‘to enslave’. Professor Nutt firmly contended that he has never met an addict who wanted to be an addict, and used Amy Winehouse as an example of a great loss in a person who struggled to escape the pattern of addiction. From a biological and neurological perspective Prof. Nutt highlighted pleasure seeking behaviours as a natural evolutionary mechanism for the survival of the species. However, in an addiction, it is the compulsion, pressure and drive to change the brain with a substance that creates a loss of control. The brain circuits of addiction were detailed as self-control, pleasure, salience/attention, learning and memory and individual differences that all happen differentially in people.

With the example of tobacco and alcohol the audience was encouraged to reminisce on their very first taste of a cigarette/alcohol, unanimously agreeing that it evoked an instant dislike. So what is it that leaves us wanting more? The biology is all about how fast and how much of the substance gets to the brain. The faster the substance gets into the brain, the higher the addiction. In withdrawal, the quicker the substance is secreted from the liver, the higher the addiction. Prof. Nutt concluded his presentation from a political perspective to challenge the associated stigma and blame of societal problems with substance use; in order for Government to provide interventions and rational treatments for addiction, we need to de-stigmatise those suffering and understand that addiction is “not a lifestyle choice”.

Professor Gerada Reith encouraged the audience to think beyond the individual to consider the sociological complexities and ambiguities behind addiction. Prof. Reith’s presentation titled ‘If addiction did not exist, it would be necessary to create it’ portrayed the reality of addiction as being a combination of environmental, political, cultural and historical contexts. In a laboratory experiment titled ‘Rat Park’ it was found that the group of rats in a small cage became addicted to morphine, whereas the rats in the ‘social housing’ cages (with light, space, toys and other rats for company) did not. This experimental finding highlights the differential behaviour patterns associated with contrasting living circumstances. Therefore, Prof. Reith highlighted that geographical areas with certain populations and social groups may experience poorer housing and health, poverty, high rates of unemployment, short life expectancy and a low level of education, which in turn can lead to a vulnerability to addiction.

The concept of environmental influences was further supported by the notion that the social climates within cultural contexts attach meanings and values to social activity. In the case of substance use, Howard Becker’s (1953) book titled ‘Becoming a marihuana user' detailed how jazz musicians of the 1950s attached meaningful social activity to smoking marihuana, whilst it was condemned by other social groups, conveying the juxtaposition of cultural core beliefs  ‘cool’ vs. ‘deviant’. Further social tensions were described in the historical use of opium which created racial tensions between societal classes; consumption was very different in function for the degeneracy vs. middle-class. In agreement with Prof. Nutt’s political stance, Prof. Reith contended that the association of crime and unemployment with drugs has blamed individuals for universal social problems. Today, drugs are the “ideological fig leaf to place over unsightly urban ills” (Jimmie Reeves and Richard Campbell 1994). The term addiction now has a cultural specificity and popularity in its label. Addiction as a term and meaning is normalised; addiction is a discourse in its widest sense. 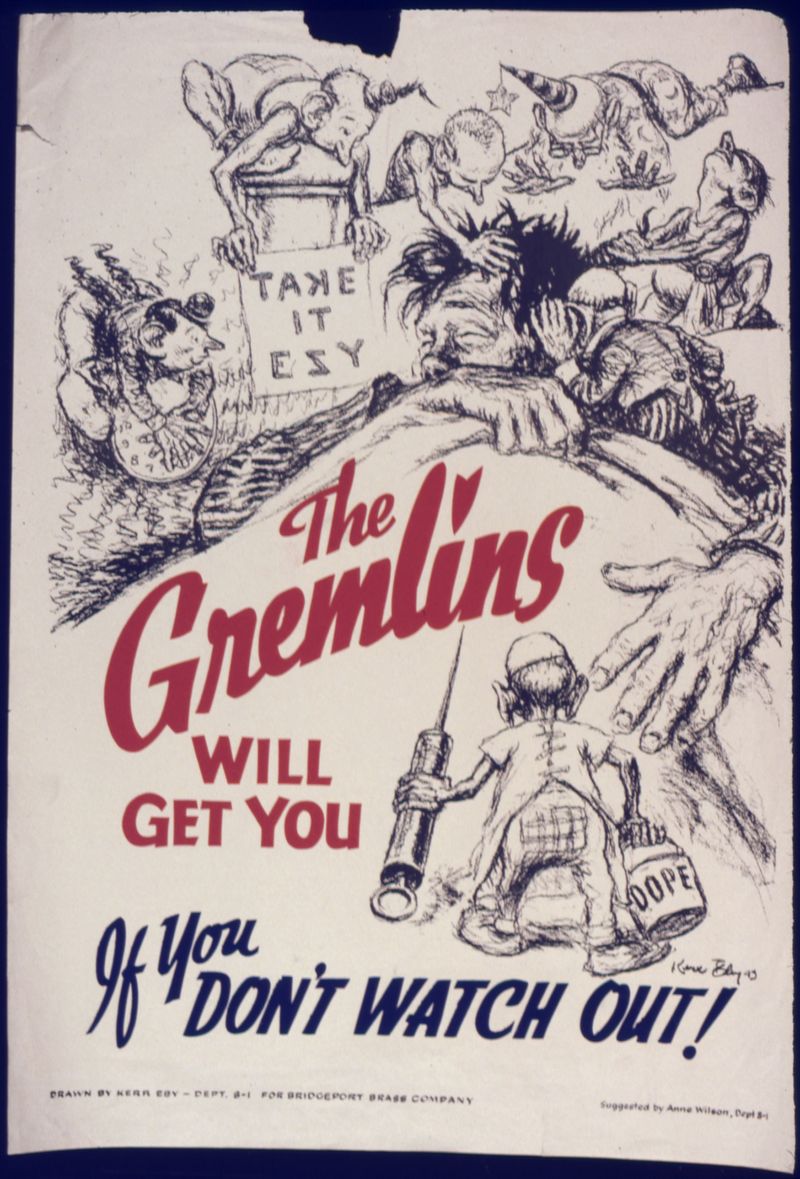 'The Gremlins will get you if you don't watch out!' US Office for Emergency Management. War Production Board. (01/1942 - 11/03/1945). This file was provided to Wikimedia Commons by the US National Archives and Records Administration.


The discussion was then opened to the audience for questions, comments and thoughts on the topic. The first question asked do we lack individual responsibility for our own pleasure-seeking behaviours, and to what extent does the economic determinism of social deprivation account for substance abuse? The answer was a medley of biological vulnerability and lack of social opportunity with Prof. Nutt clarifying “Never does one drug addict everyone”. Questions continued to scale the continuum of biological vs. sociological factors, inquiring about addictions influenced by life events; peer pressure; endorphin pleasure factors; pharmaceutical companies; prohibition issues. At the moment society has an absolutist view against addiction. Can we really drink and use substances without losing control? Definitions and cultural power lie in the hands of medical professionals who influence how we understand addiction and the changing meanings of substance abuse. Regardless of what ‘type’ of addict one may be defined, be it compulsive or impulsive, the younger you are when you start the more likely you are to be an addict. The youth is the real target; the future needs to address addiction at community level.

In conclusion, the audience were left with provocative final thoughts: Prof. Reith highlighted the individual brain as a starting point within a cultural environment predisposing addiction. Alternatively Prof. Nutt posed the question ‘Why in our brain do we have the propensity to become addicted to substances?’ His answer? ‘It is all about LOVE. Substances are hijacking the pathways of love.’ For the reality of addiction we are now contemplating a new myth: are substances a surrogate for love?

Combining the understanding of historical, biological and socio-cultural perspectives will help find further answers in what is an undeniable reality of today’s modern society: addiction. The new myth: drugs or love?

Stephanie Minchin is a practitioner in NHS mental health services for ‘City and Hackney Centre for Mental Health in' the East London Foundation Trust’ and is a Masters student in Clinical Research at City University, London.