Dr Peter Johnston is a freelance researcher, copywriter and editor, who recently worked on researching and writing labels and other text to accompany our Propaganda: Power and Persuasion exhibition. You can follow him on Twitter @PeteAJohnston. Here, Peter describes his experience, and explains the background to one of our exhibits.

When I began conducting research on the British Library’s forthcoming exhibition, Propaganda: Power and Persuasion, I was a little daunted by the task. I’m no stranger to research, far from it - but here was a massive project, more than 200 objects that needed to be researched and explored in quite a short space of time, with the results written up and presented to an audience that will number in the tens of thousands.

The obvious question was where to start? Propaganda is not a new concept, and if you visit the exhibition you’ll see that, while it has not always been known by that name, propaganda stretches back as far as Ancient Greece and Rome – and probably further. So in order to tackle this massive project I started in the most logical place: the beginning.

Using Explore, the British Library’s catalogue, meant that I had access to thousands of books and articles on the subjectfrom which to extract knowledge. The ability to handle original documents and study the original productions was truly remarkable. The problem of where to start soon became one of how I could possibly fit in all of the fantastic information. Apart from the fascinating objects displayed in the exhibition, I was able to find out about aspects of propaganda that I never knew existed and some of the stories that surrounded them.

One of the most striking examples of this was the propaganda employed by the American colonists in the War of Independence. The colonists who wished for revolution were very conscious of the importance of public opinion and propaganda in promoting and attracting popular support for their cause. Boston was the Revolution’s propaganda nerve centre, the hub from which the majority of propaganda emanated.

Initially, propaganda was orchestrated by figures such as Samuel Adams through the Boston Gazette, and his depiction of the Boston Tea Party was a propagandist triumph. Adams later headed the Boston-based Committee of Correspondence, which became the chief agent of persuasion and propaganda used by American politicians seeking initially to further the cause of ‘no taxation without representation’, and targeted both British and Canadian public opinion. In time, the propaganda came to foster calls for independence.

American revolutionary propaganda was diverse, incorporating words and images. Entertainment was politicised to further the cause and Liberty Songs and plays depicting recent events were common. Other propaganda included poems, paintings, and printed caricatures. Pamphlets by authors such as Richard Price and Thomas Paine (copies of which are in the British Library) sold hundreds of thousands of copies, and General George Washington had Paine’s writings read to his troops to motivate them and raise morale before the successful Battle of Trenton, at a time when morale amongst the Continental Army was perilously low. When reading them now you can see why, as they include quotes such as this:

‘These are the times that try men’s souls. The summer soldier and the sunshine patriot will, in this crisis, shrink from the service of his country... Tyranny, like hell, is not easily conquered; yet we have this consolation with us, that the harder the conflict the more glorious the triumph. What we obtain too cheap, we esteem too lightly.’

The British counter-attacked on the propaganda front with their own pamphlets and leaflets, but the Americans certainly won the propaganda war. They even went international, and Benjamin Franklin was despatched as an Ambassador to France in order to enlist French support and worked closely with French publishers so as to gain support amongst the wider populace. This work resulted in direct French military involvement later in the war. Similarly, John Adams also went to Amsterdam to continue and support the work Franklin was doing in Paris. 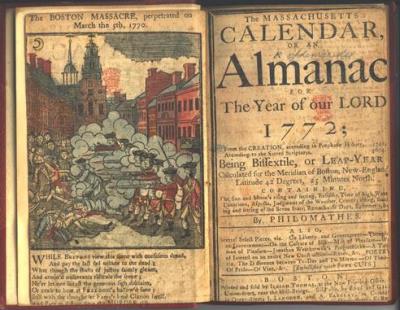 This is one aspect of a diverse and detailed history behind just one exhibit that features in the exhibition, a Paul Revere engraving of the events in Boston of 5 March, 1770.

What was truly amazing is that, despite the evolution of propaganda mediums with the growth of mass media, the central methodologies and motivations remain the same. Propaganda remains a tool for spreading messages and influencing opinion, a vital exercise in the spreading and consolidation of power that was recognised by Alexander the Great as much as it is in the 21st century.

'Propaganda: Power and Persuasion' launches on 17 May 2013. For more information see the 'What's On' pages. To join in the converstation on Twitter use #BLPropaganda