Every time you cross the road ...

Ian Cooke, Lead Curator in International Studies and Politics at the British Library and co-curator of the Propaganda: Power and Persuasion exhibition, examines how propaganda can often be fed by public opinion.

I had a great time last week at a private view of Propaganda: Power and Persuasion for secondary school teachers, put on by our Learning programme. Professor Jo Fox, University of Durham, gave an excellent talk on the evolution of propaganda between world wars and into the cold war. One concept that stuck in my mind was the idea of propaganda being a reciprocal arrangement, which responds to public opinion and may require the complicity of its audience to work.

In our exhibition, we look at the London 2012 Olympic Games as a point at which there was a considered attempt to present a view of Britain that was in some ways new - about a population that was diverse, and drew confidence and innovation from that diversity. In some ways, there are echoes of the 1951 Festival of Britain, but, as the Sport at Heart bid film shows, the emphasis on people was much more central. The 2012 Olympic Games are also interesting in terms of public opinion, and we look at this as expressed through Twitter comments in the last section of the exhibition. It's been suggested that print media followed public opinion, expressed in part through social media, in its positive coverage of the games.

Carole Holden gives an example of public opinion shaping the form of propaganda on the Americas Studies blog. Norman Rockwell's 'Four Freedoms', initially turned down by the US Office of War Information for not being sufficiently representative of "fine arts", were later enthusiastically adopted by the same office once they had proved their popularity in the Saturday Evening Post.

Seeing Rockwell's 'Four Freedoms' up close in our exhibition brings home the emotional power in the images and it's not hard to see why they were so successful. However, the exhibit that's had the most impact on me personally is one that takes quite a different approach and at first didn't strike me as very impressive at all. 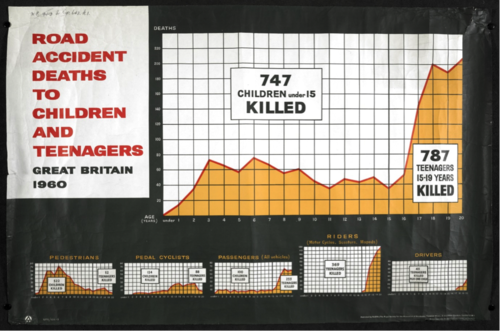 This poster, 'Road Accident Deaths to Children and Teenagers, Great Britain 1960' (click to view large image), presents a series of simple line graphs and I very nearly ignored it when I was looking through our set of posters from the Royal Society for the Prevention of Accidents. But I was drawn to the small graph in the left-hand corner headed 'Pedestrians'. The big peaks at ages 3- 4 and 6-7 was shocking and made me think about the risk to my own young children. Having been brought up with TV images of the Green Cross Code man, I was already running through the version of the code that I could remember (which I discovered is actually closer to the kerb drill) whenever I crossed the road with my children. However, seeing this poster made me much more diligent about doing this. And also now means that I take even longer to get anywhere.

Like a lot of propaganda, it didn't make me do something that was completely different than before. It worked through reinforcing attitudes and behaviour that I was already expressing. It's also quite odd in working even though I was looking at the poster in context of the exhibition - I was thinking about it as propaganda, but still influenced by it. The reason why it had such an effect was that I was exactly the right audience for it, which comes back to the idea of reciprocity and complicity in propaganda.

That's the piece of propaganda in our exhibition that's had the biggest impact on me. But how about you? What's the most effective or powerful message in your opinion or experience? Let me know #BLPropaganda.