Ian Cooke, Lead Curator in International Studies and Politics at the British Library and co-curator of the new Propaganda exhibition, writes about the background to the exhibition and about how decisions were made about the focus and content.

The posters are up all around the building this morning, and it’s just under two weeks to go until Propaganda: Power and Persuasion opens on Friday 17 May. It’s an exciting and slightly strange feeling for me, after two years planning and working on the exhibition. I’ve been co-curating Propaganda with Jude England, Head of Social Sciences, and with the enormous support from a very large group of curators and others in the British Library and elsewhere too. As the exhibition runs, I hope that you will be able to hear from them too.

Right now though, here’s some background on how the exhibition came together and some of the themes that we’ll discuss. Initially we were just impressed by the diversity of materials from around the world that we could show, and the opportunity to put on an exhibition that would be visually stunning. Propaganda encompasses many different methods across all types of media. Also, we were struck by how many definitions there were for propaganda and how they didn’t always agree. So, to keep things manageable, we decided to focus on state use of propaganda over the past 100 years. State use because most discussions of propaganda identified states as the most significant users; and past 100 years as the 20th and 21st centuries have experienced a huge increase in the volume, variety and tactics in propaganda. 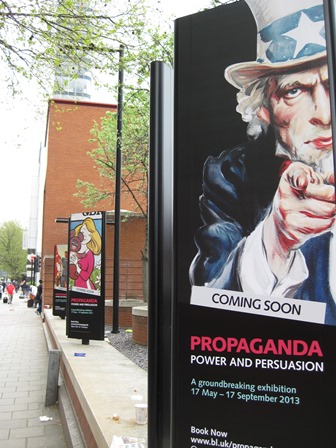 It was this point that brought home to us how significant a subject it is to be discussing today. All of our lives are affected by propaganda on a scale that would have been unknown 100 years ago, and we all react to that propaganda in different ways, including in how we define and recognise propaganda in the world around us. Over the past two years, we’ve seen the use of new and old media in communicating political change in the Middle East. More recently, news reports from North Korea have reminded us of the use of state propaganda on a large scale. In the UK, there has been close scrutiny and discussion of the relationship between newspapers and the state. The Olympic Games and the Jubilee celebrations both provided examples of the ways in which we describe ourselves and the UK both within this country and to the wider world. In the last few weeks, the debate over the funeral of Margaret Thatcher, and the announcement that Winston Churchill will appear on the next Bank of England banknote, reminds us of the significance and controversy surrounding the ways in which public figures are memorialised.

Our exhibition looks at propaganda as used across these different themes: in binding a nation together and projecting national power; in demonising people, either within or outside a state; in fighting wars and in fighting disease. We’ll end by looking at what is changing in the 21st century, and particularly how social media is providing new ways to influence public debate – and to challenge propaganda. We’re interested in your views and reactions to our exhibitions and events and hope that you will join the debate on Twitter #BLPropaganda.