Joshua, a student who has just finished year 10 at his secondary school in North London, came to spend two weeks within the Social Science department for a work experience placement in July. During his time with us he undertook lots of different pieces of work, including this one which he has given permission for us to post on this blog.

1. What are the material circumstances in which the main protagonists live? How is their house and everyday life described?

The main protagonist’s home is a flat within a house. The large house has been shared into four parts, which are flats. Coraline, the protagonist, lives in one of these flats. Her parents work at home and are constantly typing on their computers instead of interacting with Coraline. She has just moved house so she is starting school soon.

2. What clues are in the book about social class, gender inequalities, education, health etc. which help us to understand how the protagonist is situated in their social world?

They are not known to have a high social class, but nor a low social class. They seem to be a middle class family. There are no gender inequalities shown in this book. Coraline is educated as she goes to school. The family seems to be physically and mentally healthy.

They are not looked down upon by people regarding their social class.

3. What seems realistic to you about the social world presented in the book? What is unrealistic? Why?

The realistic parts of this social world are that Coraline lives in a flat with her parents, she goes to school, her parents work and she goes shopping like anyone else would normally do. She has just moved house and is struggling to get used to the new area and being away from her friends which I think is quite realistic.  The unrealistic parts of this are when she goes through the door that leads to the Other Mother’s world and everything is perfect and any imperfections in her normal world are corrected in this other world. For example she is upset that her mother will not buy the gloves that she wants, but in the other world her Other Mother gets her the gloves, and in the normal world, her parents give her disgusting food, but in the other world her other makes her delicious meals. This is not realistic as no one is so perfect that they know exactly what is wrong and has a solution. 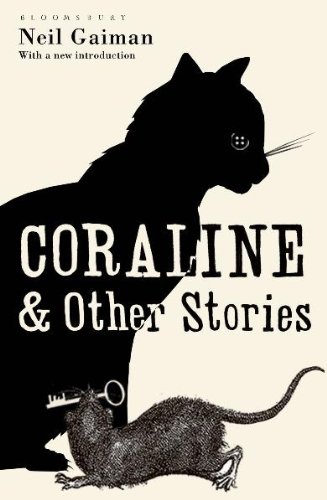 Above: The front cover of Coraline and Other Stories by Neil Gaiman with illustations by Dave McKean. Published by Bloomsbury Press. Image © Bloomsbury Publishing PLC and reproduced on this blog with their kind permission.

4. Who holds power in the book and who doesn’t? How can looking at the social world help us to explain this?

In a way, her parents hold the control, but in another way she holds the control. Her parents tell her what to do and she listens, sometimes, but mostly she does what she likes, for example her mother told her not to open the door again, but she did what she wanted and opened the door herself. Looking at her social world we can see that she would probably not want to listen to her parents as they are too busy to spend any time with her.

5. How do the social circumstances of the protagonist help explain their actions?

The reason that her parents are not spending any time with her is an acceptable excuse for not doing what they ask her as they do not have any time for her and so she shouldn’t need to have any time for them. She goes through the door to find a more exciting life, as hers is pretty boring.

6. What, if anything, does your favourite novel tell us about our own social world?

'Coraline' tells us that even if your parents don’t have any time to play with you, feed you nice meals or buy you things that you like, it doesn’t mean that you should do something risky and dangerous and just generally not normal just so you can get what you want, you should appreciate the things that you already have, and not seek perfection in risky or dangerous ways.

Find 'Coraline' and other books by Neil Gaiman on the British Library's catalogue here.

Find resources for schools, students and teachers on our Learning webpages here.