“Forward then, but still remember how the course of Time will swerve,

Crook and turn upon itself in many a backward streaming curve”

(From ‘Locksley Hall – Sixty Year’s after’ by Alfred, Lord Tennyson)

When I toured our ‘Propaganda: Power and Persuasion’ exhibition recently I was rather surprised by the strength of my reaction to one of the exhibits; namely the ‘London has taken it! London can take it again! headscarf, c.1942’ which was designed and printed by Nicol V.Gray as a limited edition of ten scarves. 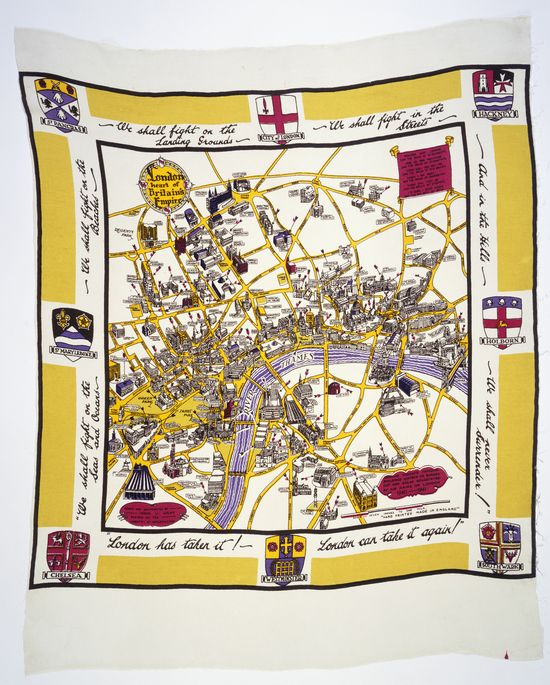 Loan and Image courtesy of the Museum of London (MoL reference LW.COS.U.B21.D1.10.)

The scarf shows a map of London with the legend “arrows indicate famous buildings bombed or burned out and areas devastated by air raids 1940-41". The map is surrounded by borders quoting Churchill’s ‘We Shall Fight Them on the Beaches, We shall fight on the Seas and Oceans, we shall fight on the landing grounds, we shall fight in the streets and in the hills and we shall never surrender!’ speech and American broadcaster Ed Murrow’s famous exultation ‘London can take it!’

However, my emotional reaction was not in response to the quotes themselves, but triggered by the conjunction of text and images found towards the bottom left corner of the scarf: 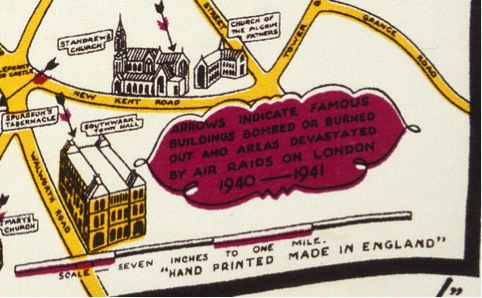 Loan and Image courtesy of the Museum of London (MoL reference LW.COS.U.B21.D1.10.)

The comment which immediately came to mind was one made to me on the 26th March 2013 by a neighbour whilst we were standing surveying the damage caused to the town hall by the fire which had occurred the day before: ‘‘that building survived the blitz, now look at it”.

Part of the roof of the town hall, built between 1864-5 and extended c.1900, can be glimpsed in the bottom left hand corner of the photograph below which was taken during the fire of the 25th.  The building houses council offices and services and the Cuming Museum  and forms part of a complex of civic buildings including the Newington Library (the building wreathed in smoke in the mid-ground of the image below) and the ‘Walworth Clinic’ building (not visible in the photograph) which was completed in 1937 and with its plaque above the door which states ‘the health of the people is the highest law’. 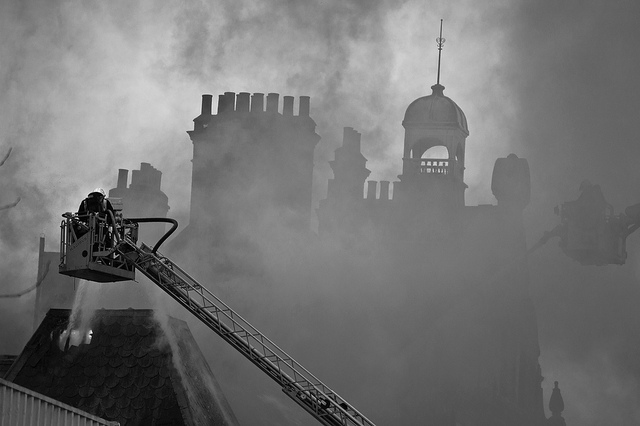 Image reproduced with the kind permission of www.tomleighton.co.uk (Further images of the fire and the resultant damage can be found by using the search term Cuming Museum Fire)

A set of buildings, services and museum and library collections, and recent circumstances, which perhaps evoke many different memories and thoughts:  from having lived through the blitz and witnessing the changes wrought on the area by bombing and the associated re-developments over the following decades; the continuities of particular places, sites and activities; the development of ‘integrated’ health care systems which prefigured the formation of the NHS; getting married or, in my case, getting to learn about the history of the Cuming Family Collections, the history of SE17 and the Borough of Southwark more generally after moving to London.

All of this has prompted me to explore some of the resources the British Library might hold not only in relation to the history of the area but also how we perhaps develop and maintain a sense of place and belonging.  As always the starting point was searching the main catalogue.

Searching for ‘Walworth’ - not including Walworth Castle, County Durham (near where I spent part of my childhood) and Walworth County, Wisconsin - alone retrieved 22 Oral Histories recorded under a wide variety of projects including the Millennium Memory Bank; Food: From Source to Salespoint; the Methodist Church Oral Archive; Labour Oral History Project; Oral History of the Post Office; Lives in the Oil Industry and Oral History of British Photography; plus many articles, books, maps and journals.

I’ve discovered a plethora of books, journals and articles relating to the study and research of the formation and maintenance of a sense (or senses) of belonging and identity in an era or globalisation.  The bibliography below provides only a small selection of such works, so I am off to call up more volumes from the stacks and, on a slightly different note, book an appointment to see a chiropodist at the Walworth Clinic.

It almost goes without saying that I look forward to the re-opening of the Cuming Museum and Newington Library in the not too distant future.

Appadurai, A.  The Production of Locality (in Counterworks, Managing the diversity of Knowledge). Shelfmark 6963.140000

Rogagly, B. / Taylor, B. Moving Histories of Class and Community – Identity Place and Belonging in Contemporary England, Identity Studies in the Social Sciences(2009)  Shelfmark YC.2012.a.6736

Interesting. Only last week, was discussing with my mother her interest in buildings that were on the site of her present home over a century before. Fascinating that we're interested in what WAS there, even before we we were!