Propaganda you may have missed

Ian Cooke, co-curator of Propaganda: Power and Persuasion provides a round-up of propaganda inspired blogs from other British Library bloggers.

One of the unexpected pleasures of curating an exhibition at the Library was receiving a limerick from our chief limericist (that’s a word, isn’t it?) Hedley Sutton. It goes like this:

A curator whose surname was Cooke

Said "I hope you will all have a look

At our new exhibition:

I've made it my mission

To cover each cranny and nook."

But of course it wasn’t a mission that I completed alone. Jude England, Head of Social Sciences and co-curator of Propaganda: Power and Persuasion, and I relied on the experience and knowledge of a very large number of people here at the British Library. The exhibition covers many countries and languages, and a lot of different formats such as bank-notes, postage stamps, film, sound, posters, leaflets etc. There’s no way we could have done this by ourselves, and the creativity and enthusiasm of our colleagues here in responding to the exhibition was one of the nicest things about putting the exhibition together.

In the exhibition, you’ll see the question, “what’s the most thought-provoking piece of propaganda that you have seen?” Answers to #blpropaganda please, and many thanks to the person who answered, ’50 shades of grey’. 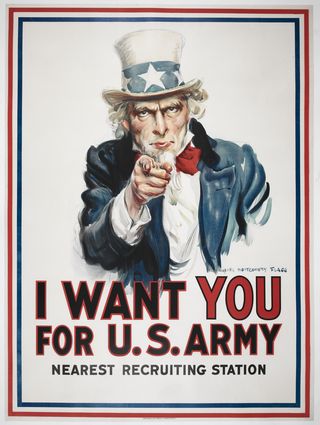 Starting off with the most prominent image from our exhibition, Uncle Sam has been hard to miss if you’ve visited the Library recently (or just walked past the Euston Road). Over on our Americas studies blog, Carole Holden has written about the origins of this iconic poster, and its artist, James Montgomery Flagg. It’s also served as a dramatic backdrop for photographs, such as this one of Justin Webb. 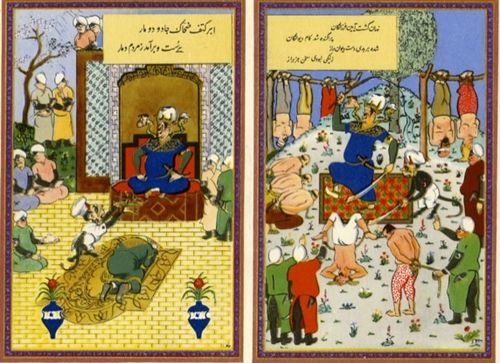 British World War Two propaganda for use in Iran, drawing on a well-known Persian epic, the Shahnameh (COI Archive PP/13/9L)

The two themes that have been most prominent are the use of propaganda to create a sense of common identity, and, conversely, the use of propaganda to define an enemy and demonise others. John O’Brien describes British plans to discredit the Quit India movement during World War Two. Another example of British wartime propaganda attempted to use the Persian epic, the Shahnameh, or ‘Book of Kings’ to present Hitler as a demonic tyrant, defeated by the heroic warriors Churchill, Stalin and Roosevelt. Nur Sobers-Khan explains the history and images used in these propaganda postcards aimed at an Iranian audience.

Germany was also active in its use of propaganda aimed at states in the Middle East. The tactics used were similar, this time portraying Britain as the oppressor and Germany on the side of liberation in the region. Radio broadcasts in Arabic language were used to promote German victories and encourage dissent against Britain. Writing on our Untold Lives blog, Louis Allday uncovers evidence of British reaction to the broadcast of German radio propaganda in Sharjah, on the Persian Gulf.

One of the most successful examples of propaganda that you’ll see in the exhibition is the ‘Four Freedoms’ series of posters by Norman Rockwell. These posters have great emotional power, using domestic and local scenes to illustrate the rather abstract theme of ‘freedom’. Carole Holden writes about the development and history of these posters, which are credited with raising over $130 million dollars in war bonds. 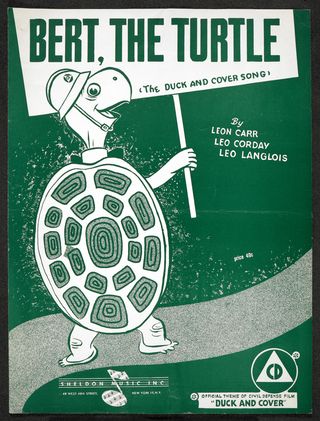 Propaganda remained an important tool during the cold war, and one of our stranger finds dates from this period. Katya Rogatchevskaia describes anti-Soviet propaganda produced by a Russian organisation active in West Germany. This includes two template images for printing propaganda images (complete with instructions on how to make your printing ink). In the United States, Bert the Turtle was used to instruct children on how to respond to a nuclear attack. This seemingly-simple figure has proved to be one of the most complex examples of propaganda – with some people disputing its description as propaganda. The story of ‘Duck and Cover’, and some of the subsequent analysis of this campaign, is recounted by Carole Holden on the Americas studies blog. 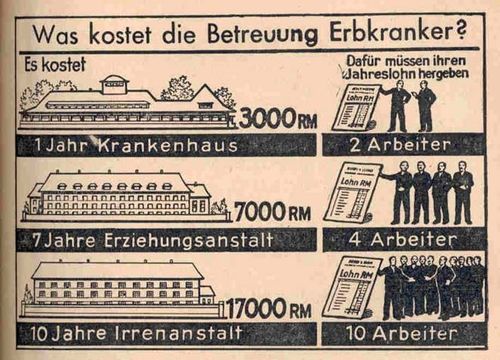 In our exhibition you’ll see further examples of propaganda designed for children, the most disturbing of these being a maths textbook produced for use in schools in Nazi Germany. One question in the book asks how much it costs (in terms of a worker’s salary) to care for the ‘hereditarily unfit’. In ‘Propaganda in the schoolroom’, Susan Reed explains more about this textbook and other examples within the Library’s collections.

Revisiting these blog posts reminds me of the breadth of interests and activities across the Library, and I’m looking forward to seeing more as the exhibition continues. If this has inspired you to create your own propaganda, don’t forget our competition for new designers, in collaboration with Artsthread. Fran Taylor explains more on our Inspired by … blog. The brief is to come up with a new design, illustration or short film to encourage people to change attitudes and behaviour on health. You can get food for thought, or at the very least a recipe for bhajiyas, from John O’Brien’s description of booklets from the Government of India’s nutrition campaign in 1945.