When did we ever have it so good? Part 1 of the iPod generation

Abiola Olanipekun is an intern at the British Library. For her latest series of blog posts she will write a four posts which review reports by Reform that have been uploaded onto our Management and Business Studies Portal. This first blog in the series is about the report ‘Class of 2005: The IPOD generation – Insecure, Pressured, Over-taxed and Debt-ridden'.

As a member of the Generation Y, and the iPod Generation, I only know too well the constant reminders about how my generation are riddled with some form of debt or are broke, lost, underemployed and…broke again.

As the younger generation, we are said to be carrying a substantial financial burden of an ageing population on our backs whilst at the same time benefiting less from the state than the generations before us.

Our apparently declining morale is exacerbated by the strong-hold that older generations have on the property ladder which is of a kind that is no longer available to us. Whether it be restricted through receipt of erased housing benefit (young person single room rate anyone?) or through difficulty of affording (let alone attaining) a first mortgage…I think it’s safe to say that things seem a tad bleak.

All this, from my point of view, has been looking this way more or less since 2008. But no, it seems I am wrong. The iPod Generation folks were suffering way before the 2008 financial crisis, according to Reform. (Oh, and in case if you are wondering what iPod stands for then here is a mouthful of sombreness: Insecure, Pressured, Over-taxed and Debt-Ridden.) Nice isn’t it? Well actually no, it is not. I’m afraid there will be more acronyms to follow within this blog post.

As I was working through my latest assignment for the MBS Portal, I was introduced to the think-tank Reform. According to their work, the younger generation (who are under 35), have experienced systematic unfairness and financial insecurity for some time.

We pay higher taxes, have fewer benefits and, as Reform put it, have experienced the end of the ‘welfare bargain’. According to Reform, a substantial number of young people don’t save as much as older generations (and that’s when we do save), are taking care of an aging population and pay higher taxes than previous generations did. We are then nicely reminded (being sarcastic by the way!) in the report of how the baby boomers had free education, jobs for life and the best of the housing property ladder.

Thanks! At such a financially sensitive time, that information definitely just helped my morale. Reading this report tastes rather like a dish served pure and raw (insert straight face icon here). 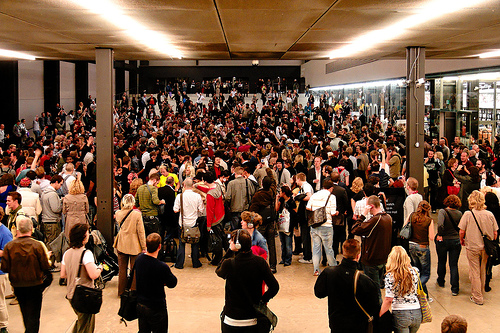 Above: some members of the iPod generation during happier times - at a silent disco at the Tate Modern. Photo © Dean Ayres

So, when did we ever have it so good?

Or let us just ask the real question, when will the under 35s ever have it as good as previous generations?

The initial aims listed in the report are to review the impact of tax, public expenditure and higher education policies on young people. Other points stressed in the report include the overall economic position of the younger generation, how policy decisions affect their financial standing (such as the tax increases on stamp duty and inheritance tax, introduction of tuition fees, and increased spending requirements for the NHS and social care).

Identified in this report are the following groups of young people (worrying reading - please take caution):

NEETS (Not in Education or Training)

Overall, I find this report bleak but nonetheless full of useful facts. Reform has made a clean effort with facts to show a particular type of financial sombreness for the younger generation that I did know entirely existed before 2008.

Nevertheless, all this hurts. It hurts as a young person, a young adult and another individual trying to make it through life on non-borrowed means and a testing wage. It hurts that these reports provide evidence that is visceral and relatable to such a degree, that my usual interrogation for anything I read is somewhat disabled when I read what Reform have to say. I believe that this is so because of how this information directly correlates with the fears that I have for my own future, and links to the other issues described in reports about Generation Y that I am facing now.

Form your own opinion and read it the report by Reform here which has been added as taster content to our portal.

Let’s hope that my own future along with the rest of the under 35s is actually bright, like that really catchy Orange slogan.