On Patriotism: Propaganda in the Library’s Canadian Photographic Collection

Dr. Philip Hatfield, Curator for Canadian and Caribbean Studies at the British Library writes on photographs, patriotism and propaganda in this guest blog post. 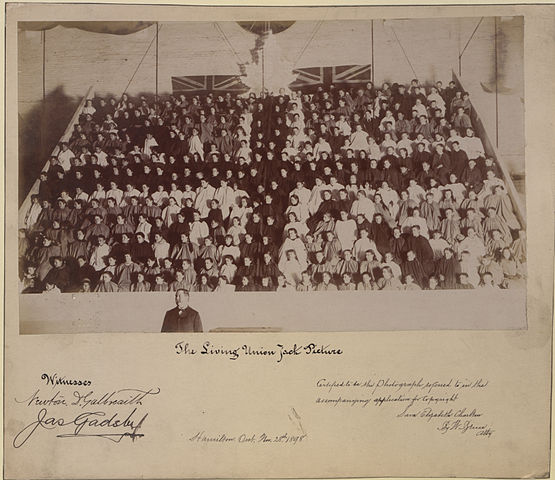 As the British Library’s ‘Propaganda’ exhibition highlights the methods of this medium are more than just finger-pointing and draconian messaging. Indeed, it has a role in everyday life in war time, peace time and private time.

One form of message that pervades all these different times and spaces is the iconography of patriotism; for the British, the Union Flag that adorns cushions, cricket pitches and camouflage uniforms across the country is the best example. I was reminded of this recently when browsing the Library’s recently digitised collection of Canadian photographs, which can now be found on Wikimedia Commons. Above: Joseph Clarke’s, ‘Likeness on a Maple Leaf with Union Jack as background’ (1900). Available from Wikimedia Commons.

Today we think of Canada’s symbol as being the Maple Leaf but at the beginning of the twentieth century Canadians showed as much affinity to the Union Flag as to the symbols of maples and beavers. This is borne out by the many occurrences of the flag in the collection, from ‘living’ pictures and humorous memorabilia, to commemorative portraits and symbols to rally behind in times of war.

The above ‘Living Union Jack’ photograph is one of the collection’s eccentric oddities (and slightly let down by the incorrect hanging of the Union Flags in the background) but it speaks to the fondness people held for the symbol and, I would suggest, it’s viability as an image people would consume; this was most likely sold as a postcard. 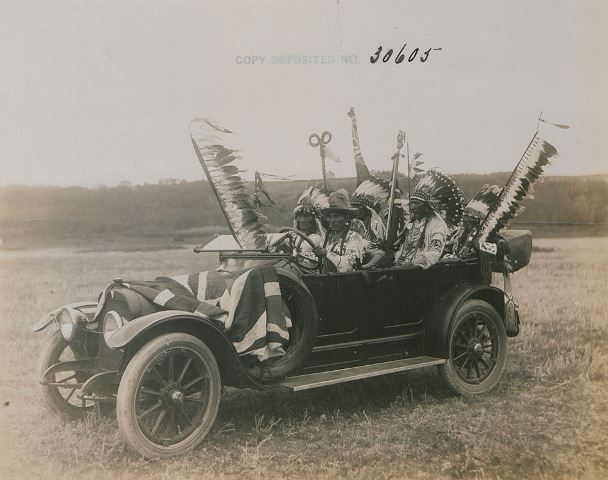 Above: Ronald Mumford’s, ‘Canadian Patriotic Indian Chiefs’ (1915, one of a series of four). Available from Wikimedia Commons.

The flag’s most common role is in war portraits, commemorative photographs taken before or after a soldier left to fight in British conflicts. The ‘Likeness on a Union Jack’ photograph shares this style although this was perhaps reproduced as a card in support Canadian volunteers for the South African War of 1900 . In the case of the final photograph what we see is pure propaganda, a group of First Nations chiefs posed with a Union Flag to suggest their support for the First World War.

Many from the First Nations were involved in British wars but the exact agency of the individuals in this photograph is unclear. What is also unclear is to what extent we should regard the other photographs shown here as propaganda? No doubt people would feel differently about the images depending on their political affiliations but are the implicit nationalistic sentiments of the ‘Living Union Jack’ on a par with the message of war time allegiance embedded in the ‘Patriotic Indian Chiefs’ photograph?

I would argue not, yet the symbol of the Union accompanies each of these photographs and it communicates a message of trans-national solidarity, to varying degrees, in each one. What we see here, then, is the magic of propaganda; amusing in some situations, comforting in others, forceful at its extremes and always there, embedded in the symbols we see every day.

Read more posts by Philip on the Americas blog.