Katy Barrett, a final year PhD candidate at the University of Cambridge, writes about the problem of measuring longitude in the eighteenth century and how researching this led her to the British Libary's pamphlet and patent collections.

Blog readers of a certain age will remember well one of my favourite lines from Nick Park's animation Wallace and Gromit. As the villainous robotic dog Preston operates a replica of his Wash-o-matic, Wallace yells ‘That’s My Machine! I've got patent pending on that!’ This simple phrase sets Wallace up as the archetypal nutty inventor, who tinkers about with bizarre machines in his garage and then attempts to sell them to a naive public. I have kept thinking back to Wallace recently as I have worked on proposals for a scheme seen as similarly ‘nutty’ in the eighteenth century.

This was the problem of measuring longitude at sea. By the early 1700s, Europeans had, of course, been ploughing the oceans for centuries, but it was in this period that expansion of colonial trade and international naval warfare made it crucial to be able to get from A to B safely and in a predictable amount of time. To navigate effectively you need to know your place on the globe in relationship to two points: latitude and longitude. Latitude is fairly easy to measure by celestial observations as it is linked to the fixed points of the poles and the line of the equator. But, longitude has no such stable markers (even the 0 meridian at Greenwich was not agreed until an international conference in 1884), and required the development of accurate instruments and complex mathematics. The British government therefore passed an Act in 1714 to encourage proposals of new methods to measure longitude at sea. The Act established a Board of Commissioners to judge proposals, with staggered reward money for any successful ones. Proposals could win ten, fifteen or twenty thousand pounds for finding longitude to within sixty, forty and thirty geographical miles respectively.1

This represented a very large amount of money in the eighteenth century, and so attracted proposals on a broad spectrum from serious inventors, to fortune hunters, to charlatans. 'The twenty thousand pounds' became a hopeful reference equivalent to winning one of the popular contemporary lotteries. This meant that all proposals rapidly became tarred with the same brush in the public imagination, in press reports, and even used by contributors to discredit their competitors. In August 1752, the editor of The Gentleman’s Magazine, John Nichols, found it necessary to publish a notice ‘To the Gentlemen who have sent us Proposals on the Longitude’, advertising that ‘many schemes have been sent us, which to publish would do no honour to their authors nor service to the community…some for effecting utter impossibility…The authors of all such will not, ‘tis hoped, blame us for suppressing their papers.’2

Likewise, pamphlets featured criticisms of each other's proposals. 'They're all trying to con you but me' became a standard argument in published longitude pamphlets. William Whiston was a particular target of criticism and satire for his 1714 proposal of using rockets sent up from ships moored at specific longitudes.3 A pamphlet by Jeremy Thacker commented of Whiston and his collaborator Humphrey Ditton, that they had ‘sprung the Twenty Thousand Pounds, and as I hope to get it, I ought to be civil to them...poor Mr. W-----n has been so often handled as a Longitudinarian, and a Latitudinarian…that it would be as barbarous as ungrateful for me to Insult over him.' This was the satirical background to the figure solving longitude that William Hogarth included in his 1735 engraving of Bedlam, the contemporary madhouse, in his A Rake's Progress.

Yet, inventors were also trying to make serious proposals. In 1735 Caleb Smith and William Ward proposed a new type of quadrant, and in their preface bemoaned how proposals were so universally ridiculed, saying 'The various Idle Schemes and Chimerical Projects that have been offered as Discoveries of the Longitude, have so much prejudiced Men’s Minds against all Propositions of this sort, and brought so much Disgrace on the Projectors, that every Attempt to solve this valuable Problem, is now ridiculed as the effect of a weak, or a distempered Brain.'5 For, the point was, partly, that a trial and monetary reward from the Board of Longitude provided not only the finances to develop an invention but also a means of establishing priority and ownership in the ideas behind it in the days in which the concept of intellectual property was still in its infancy. 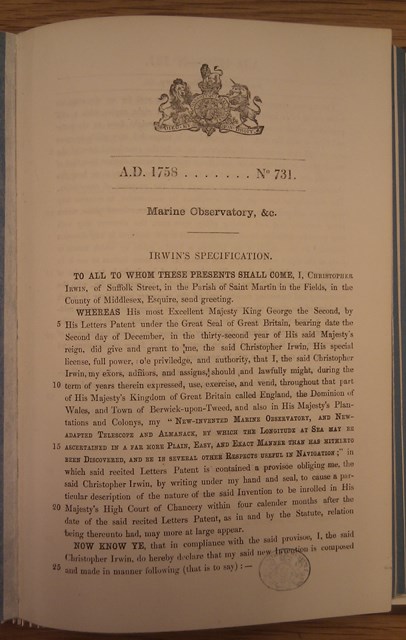 Above: the first page of Christopher Irwin's patent specification of 1758.

The vast majority of these longitude pamphlets (as well as those that satirise them) are now in the British Library, and therefore also available on Eighteenth-Century Collections Online (ECCO). What struck me as I worked on these sources is how many longitude proposals came to the BL through the Patent Office Library*.  The Patent Office was established in 1852, its creation made possible by the passing of the Patent Law Amendment Act in July of that year, long after the Board of Longitude was disbanded in 1828. The Act demanded ‘true copies of all specifications to be open to the inspection of the public at the office of the Commissioners’ and from this requirement developed the Patent Office Library which opened on 5 March 18556.

The longitude pamphlets may well have come from the private collections of Bennet Woodcroft or Richard Prosser which together formed the nucleus of the new library.  As Assistant to the Commissioners of Patents, Woodcroft was responsible for the identification, collation, printing, abstracting and indexing of early British patent specifications7 and was first Superintendent of Specifications.  Prosser was an engineer and patent reform campaigner.  Both men recognised the importance of providing a reliable reference collection of previous specifications and inventions and we know that Prosser’s collection of around seven hundred volumes included a large number of items published before 1800.

Whatever their source, despite contemporary satire longitude pamphlets entered the Patent Office Library as reference works.  This was the result of changes in attitudes to inventing that such pamphlets slowly helped to foster. For the eighteenth century was the period in which patents were beginning to resemble their modern descendants: the same decades in which the authors of longitude pamphlets were attempting to attract backers for their inventions. These pamphlets attempted to describe their inventions in a convincing way, and often to include an engraved image to give their idea more credibility. Thus, longitude pamphlets developed along the lines of patent specifications, as the rubric of these specs was itself brought to fruition8. In fact, some of the same people who proposed longitude solutions also sought patents for their inventions, as different avenues to the same goal of financial and intellectual security. The 2000 film Longitude, based on the book by Dava Sobel, represents Christopher Irwin, inventor of the marine chair, as a bumbling fool, but he was sufficiently clued up to apply for a patent for his chair in 17589 (GB731 of 1758).

The fact, however, that it is not just patent applications, but a broader group of longitude pamphlets, that came together in the Patent Office Library, nicely tells the story of how the library developed precisely from the concerns over the status of invention that led eighteenth-century commentators to ridicule such pamphlets. The joke against Wallace over 100 years later, shows that the ridicule was harder to shake.

*The Patent Office Library (subsequently the National Reference Library for Science and Invention) was one of the institutions brought together in 1972 to create the British Library.

(1)  The traditional story of the longitude problem and the Board of Longitude can be found in William Andrewes' (ed.), The Quest for Longitude: The proceedings of the Longitude Symposium, Harvard University, Cambridge, Massachusetts, November 4-6 1993 (Cambridge, Massachusetts, 1996) [British Library, Document Supply q97/00766]. The papers of the Board of Longitude are now available through the Cambridge University Digital Library

(3)  William Whiston,  A new method for discovering the longitude both at sea and land, humbly proposed to the consideration of the publick (London, 1714) [British Library, General Reference Collection 533.e.24.(7.)]

(4)  Jeremy Thacker, The longitudes examin'd. Beginning with a short epistle to the longitudinarians, and ending with the description of a smart, pretty machine of my own, which I am (almost) sure will do for the longitude, and procure me the twenty thousand pounds (London, 1714), p.2 [British Library, General Reference Collection 533.f.22.(1.)]

(5)  William Ward, The description and use of a new astronomical instrument, for taking altitudes of the sun and stars at sea, without an horizon; together with an easy and sure method of observing the eclipses of Jupiter’s satellites, or any other phoenomenon of the like kind, on ship-board; In order to determine the Difference of Meridians at Sea (London, 1735), p.4 [British Library, General Reference Collection 117.d.12.]

(9)  This is based on Dava Sobel, Longitude: The True Story of a Lone Genius who Solved the Greatest Scientific Problem of his Time (London, 1995) [British Library, Document Supply 96/06254, General Reference Collection YA.1995.a.27311]. Irwin published his invention in A summary of the principles and scope of a method, humbly proposed, for finding the longitude at sea (London, 1760) [British Library, General Reference Collection C.194.b.349].

A note on the author: Katy Barrett is a final year PhD Student on the AHRC-funded project 'The Board of Longitude 1714-1828: Science, Innovation and Empire in the Georgian World' jointly hosted by the Department of the History and Philosophy of Science at the University of Cambridge and Royal Museums Greenwich. She works on the cultural history of the longitude problem, about which you can hear more in a 'PhDCast' done with CRASSH (Centre for Research in the Arts, Humanities and Social Sciences) at Cambridge. Katy blogs and tweets as @SpoonsonTrays.