Propaganda, the geography of not-knowing and the history of ignorance

Toby Austin Locke, a member of the Social Sciences department at the British Library, writes about the dangers of forms of propaganda which promote non-action and acceptance.

We tend to think of propaganda as something fairly active; a message or instruction to act or think in a certain way, a persuasive force. The images that spring to mind when we speak of propaganda, the quasi-mythological Uncle Sam, the deified images of noble Soviet workers, or even the seductive images that flit across our television screens and line the walls of the underground stations, all appear to encourage us to act or think in a certain way, to stand by our country, to honour the workers, to use the right aftershave in order to achieve absolute sexual virility. But the current exhibition here at the British Library has made me start thinking about another form of what could be considered propaganda, a form that is potentially far more pervasive and powerful. Propaganda that rather than persuading us to think or act in a certain way,  encourages us not to think or act at all, to keep our heads down, to maintain our apathy. 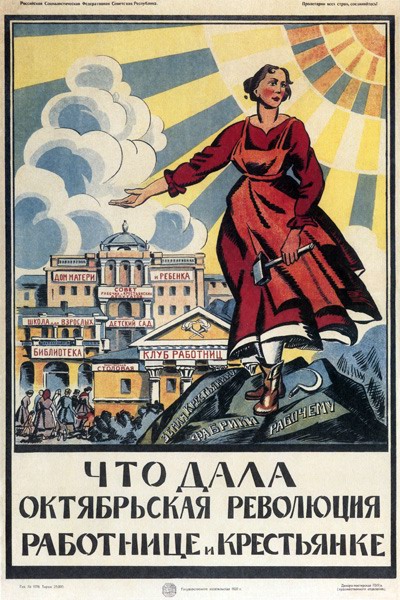 There is a famous piece of propaganda which illustrates this particularly well, one which has recently seen resurgence in the popular imagination and has transformed from an old, forgotten piece of state propaganda to a potent commercial image, practically a brand in its own right. I’m thinking of the famous Ministry of Information poster ‘Keep Calm and Carry On.’ This image was never used for its intended purpose. It was originally designed to be distributed should Nazi forces have invaded England. 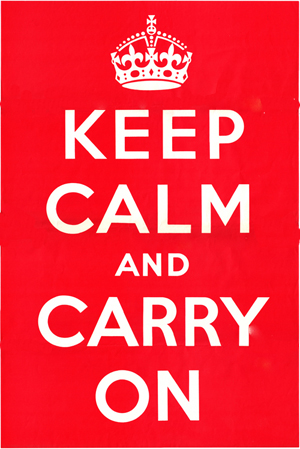 Above: Keep Calm and Carry On. By original poster by UK Government, enhancements, conversion to PNG by oaktree_b, via Wikimedia Commons. Copyright and download here. [Public domain]

To my mind at least the answer is no. When atrocities are occurring all around you, when ethics are no longer a matter of concern, when peoples lives and existence are at stake, the last thing I would like to see happen is for everyone to ‘keep calm and carry on’. Surely if there are ever times for people to rise up and take action, it would be under such conditions.

The question I’m trying to raise here, perhaps a little clumsily, is regarding the role of non-action, of ignoring, of not knowing in certain power relations. In a short video snippet, Bruno Latour briefly mentions two possible areas of study: the geography of not knowing and the history of ignorance. He points out the work-like elements of knowing, the labour involved in knowledge, that may often make not-knowing or ignoring the easier option. Facing up to painful truths is certainly not easy, but does ignoring the ethical consequences of such truths seem like the best alternative? It comes back to J.S. Mill’s statement “it is better to be a human being dissatisfied than a pig satisfied; better to be Socrates dissatisfied than a fool satisfied.” (2010 :46) Would we rather know and act to attain ethical outcomes and perhaps be dissatisfied, or remain in ignorance and contentment?

It could be suggested that such a message is found articulated in political discourse today through the current UK Government’s mantra regarding people who want to ‘work hard and get on’ and the pan-European political insistence of the necessity of austerity. Supporters of the welfare state across the country are coming out in protest against the ‘bedroom tax’ and wider austerity measures, but the mantra of Government, particularly regarding those who want to ‘get on’, offers them no support – it is here to support those who keep their head down and keep going. Whilst there are equally arguments to be heard in favour of the Government’s approach, a supporter of welfare provision could certainly make a case for this mantra being a reincarnation of the ‘keep calm and carry on’ approach to propaganda, encouraging people to look the other way, and not think too hard about the wider consequences of what is going on around them. Of course, the ethical implications of such an approach are open to debate, and are certainly not about to be resolved here.

Toby Austin Locke currently works on the Social Welfare Portal at the British Library. The views represented here are his own and do not reflect those of the organisation. You can follow him on twitter @BLSocialWelfare (in a professional capacity) and his personal twitter account is @TobyaLocke.

Toby Austin Locke is currently working in the British Library social sciences team on the Social Welfare Portal and is due to start working towards his doctorate in October 2013 at Goldsmiths College, University of London. You can contact him on twitter @tobyalocke or read more of his blog-posts at - See more at: http://britishlibrary.typepad.co.uk/socialscience/2013/02/encounters-between-art-and-science.html#sthash.U42T6ySO.dpuf