The most unpopular government department

Ian Cooke, co-curator of 'Propaganda: Power and Persuasion' writes about the Ministry of Information.

Some of the most memorable propaganda from the Second World War was generated from or with the support of the Ministry of Information. “Careless Talk costs Lives”, “Dig for Victory”, “Keep Calm and Carry On” all now have an enduring power, recognition and popularity in British culture today. It may be surprising then that these all came from a Ministry that was seen as highly unpopular and ineffective when it began on 4 September 1939.

This was in fact the second time that a Ministry of Information had been set up in Britain. During the First World War, the Department of Information was created in February 1917 from a number of bodies with responsibilities for propaganda and press in allied and neutral countries and in military zones. Maintenance of morale, recruitment and war savings campaigns within the UK remained the responsibility of a network of commercial, Parliamentary and voluntary committees. The Department became the Ministry of Information in March 1918, and was dissolved in November 1918.

Planning for a revived Ministry of Information, in the event of war in Europe, began as early as 1936, drawing on experiences and recollections of those who worked in the First World War. In our exhibition, you can see a note on the volume of material produced by the Department in 1917 – 40 million items in just 10 months. The renewed Ministry of Information held responsibility for domestic propaganda and censorship (unlike its First World War predecessor) as well as propaganda in allied and neutral countries. As well as producing publicity materials itself, the Ministry was intended to advise other government departments on publicity and co-ordinate this work. From the start, the relationship between the Ministry and other government departments was difficult, with battles over who made decisions on public information material. There was also a feeling within the Ministry that its role regulating BBC news output was ambiguous and it had not been given the necessary authority to carry it out. In practice, reporting of the war on the BBC and in the British press was more obstructed by the reluctance of the Service Ministries to release timely information. Public opinion, however, placed the blame on the Ministry of Information. All these difficulties are perhaps reflected in the rapid succession of Ministers in its first years: Lord Hugh MacMillan (September 1939- January 1940), Lord John Reith (January- May 1940), Alfred Duff Cooper (May 1940- July 1941), and Brendan Bracken (from July 1941). 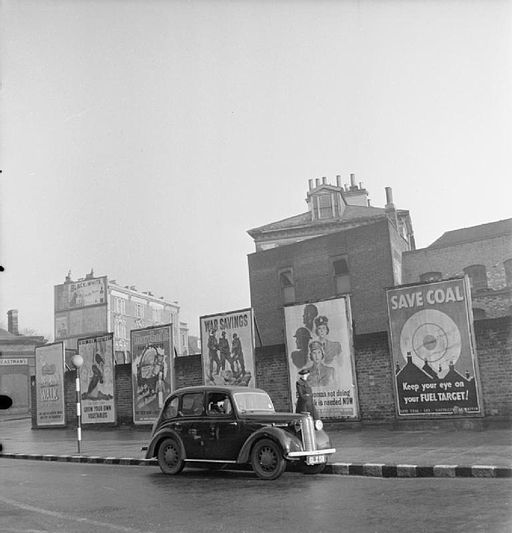 For its first years, the Ministry was unpopular within government and also with the press and public in Britain. Its early attempts at producing posters were met with strong resistance. A poster with white lettering on a red background, very much in the style of “Keep Calm and Carry On”, carried the message: ‘Your Courage, Your Cheerfulness, Your Resolution, Will Bring Us Victory’. Public and press picked up on the distinction between “your” and “us”, complaining that the message appeared to be too aloof or condescending – worse, that it suggested that the British public would be relied on to deliver victory for the political elite in Whitehall. This didn’t, however, stop the brewery Courage releasing their own version of the poster with the amended words, ‘… your Courage will add per 1d pint to the Exchequer’. The “Keep Calm” poster, intended for use in the event of imminent invasion, was never used – although it is doubtful that it would have achieved the level of popularity in 1939 that it has enjoyed in recent years.

Similarly, the development of the Home Intelligence Department, to observe and report on public morale through Britain, although of high importance to the planning of public information, was initially met with suspicion and derision. Those tasked with interviewing members of the public, and reporting on morale around the country, were described as ‘Cooper’s Snoopers’, after the then Minister, Duff Cooper.

The Ministry learnt from its early mistakes, and heeded the advice given from, amongst others, Mass Observation on the tone and appearance of posters and leaflets. The use of plain text and distant tone was replaced with more sophisticated tactics, using humour and images. Significant too, the appointment of Brendan Bracken as Minister brought better political support for the Ministry (Bracken was a close friend of Churchill’s) and, crucially, improved the flow of information to the British press from the War Office, Admiralty and Air Ministry.

Following the end of the Second World War, the Ministry was closed. Responsibility for publicity to countries outside the UK passed to the Foreign Office and Colonial Office, while newly-formed Central Office of Information (COI) took over responsibility for advising government departments and commissioning publicity. Over the next 60 years, the COI were responsible for commissioning some of the most memorable British publicity campaigns, including the Green Cross Code (with the Royal Society for the Prevention of Accidents), the “Clunk Click” campaign to promote use of seatbelts in cars, “Coughs and Sneezes” and AIDS awareness publicity. From 2010, however, government spending on marketing campaigns was substantially reduced as part of wider public spending cuts, and the COI closed at the end of March 2012.