Historic Heston at the British Library

“Why should creativity be a new thing?” The answer is: it isn’t. Yet many of us view the cooking of Heston Blumenthal – owner of The Fat Duck and Dinner - as something of a novelty. Culinary creativity, championed by chefs like Blumenthal in Britain, Adria Ferran in Spain and René Redzepi in Denmark can seem ‘space agey’ and utterly new, but when Heston started researching for his new book, Historic Heston, he stumbled upon a whole lot of ‘other Hestons’ buried in the past.

Two weeks ago, as part of the Georgians Revealed exhibition, the British Library hosted a discussion between Heston Blumenthal – one of Britain’s most acclaimed chefs and exponent of the egg and bacon ice-cream, and Ivan Day – food historian, broadcaster, writer and confectioner. Centring on Heston’s new book and using the Georgian period as the frame for their discussion, Blumenthal and Day wound their way through history and their own pasts, expertly guided by food writer and historian Bee Wilson as Chair.

Buying his first Georgian cook book at 13 in the 1960s, a time when food was in ‘a trough of despondenc’,  Day felt like he had alighted on a golden age of British gastronomy. He began collecting his pocket money to cook menus from these books (by his own admission, Day was no ordinary 13 year old!). Initial obstacles were presented by the language  ‘how does one cook a lump?’ he asked himself, ‘how does one broil a lump, grill a lump or even find a lump in the first place?’. A lump, Day later discovered, referred to lumpfish. The next challenge was his lack of eighteenth century cooking equipment – where does a 13 year old boy pick up a ‘larding needle’ on a Saturday afternoon? 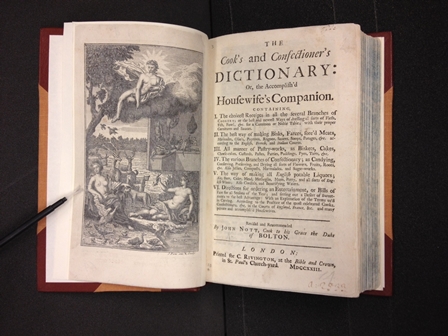 Above: The Cook’s and Confectioner’s Dictionary, or, the Accomplish’d Housewife’s Companion. John Nott, London, 1723. Reproduced with the kind permission of the British Library

The early Georgian cookbooks that Day had stumbled across were not written for the everyday cook but for the courts of the rich and powerful. Many were menus of aspiration and display rather than intended for daily domestic reality. Later in the century, women cookery writers like Hannah Glasse and Elizabeth Raffald began to write for middle class households making a virtue of economy and simplicity.

Any assumptions, however, that things were necessarily more basic in the past are undermined by illustrations showing the intricate presentation of jellies, pastries and pies. For the talk at the British Library, Day brought with him a small, tapered rolling pin - evidence of the delicacy of the pastries produced and the exacting thought behind the instrument. A tapered rolling pin, Day explained, can be tilted and swivelled to mark out a perfect circle. The Georgian period produced a proliferation of cutting edge kitchen equipment feeding an ‘exotic and experimental seam’ of cookery. Many of the instruments uncannily resemble some of those used by Blumenthal today – the syringes used for piping fritters into fat in the Georgian kitchen reminded Blumenthal of the equipment he uses for similar tasks.

Like Day, Blumenthal is a history enthusiast but their approaches to history differ. While Day uses historical cookery books and tools to recreate the dishes of the past, Blumenthal uses historical gastronomy to inspire new recipes. In Historic Heston source recipes are used as a springboard for the creation of new dishes. For instance, an 1826 recipe from Margaret Dods’ The Cook and Housewife’s Manual for cucumber catsup (ketchup) becomes roast scallops with pickled shallots, cucumber fluid gel and cucumber ketchup in a bergamot, borage and cucumber butter emulsion.

Rather than suffering from the particularly British condition identified by Day as ‘cultural amnesia’ Blumenthal celebrates the creativity of the past and proudly leads the flavour-full tradition forward.

The Exhibition Georgians Revealed will run at the British Library until the 11th March 2014.

Historic Heston is published by Bloomsbury and is available in the reading rooms at the British Library, as is Bee Wilson’s recent book Consider the Fork published by Particular.

For those interested in getting a more hands-on experience of Georgian cookery, Ivan Day runs courses at his home in the Lake District and can be found at historicfood.com.

The author of this post can be contacted by email at: Barley.Blyton@bl.uk