Following the centenary commemorations of the outbreak of the First World War, few images are more poignant than the Cenotaph in London’s Whitehall and the congregation of ex-service persons standing in silent remembrance of fallen comrades. With the last veterans having now passed away, the First World War has past from memory into history.

In many respects the Cenotaph, which started life as a wood and plaster mock-up, sits at the centre of a deep and complex narrative which brings together the arts of literature, sculpture and poetry, with infrastructure planning in communities across the country. This post showcases one of the more imaginative proposals for war memorials in the years following the conflict. 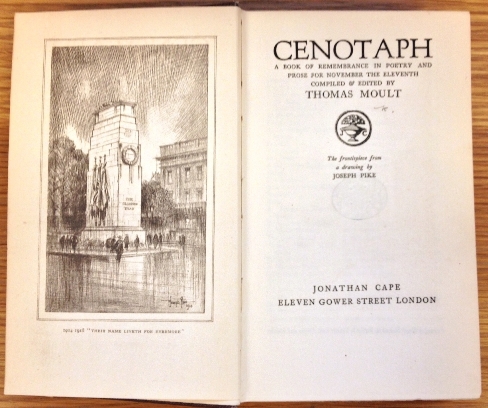 Above: Cenotaph: a book of poetry and prose,  the contents of which are possibly more readily associated with remembrance and memorialisation. [BL Pressmark: 12298.a.9]

Nestled in the collections there is a thin fifteen page pamphlet published by the Remembrance Association Committee in 1920. This work echoes a general desire throughout the country for local memorialisation. The title of this work is Roads of Remembrance. It suggeststhat suitable existing highways are identified and transformed to show the ‘dignity of roads of remembrance, adorned with trees’. 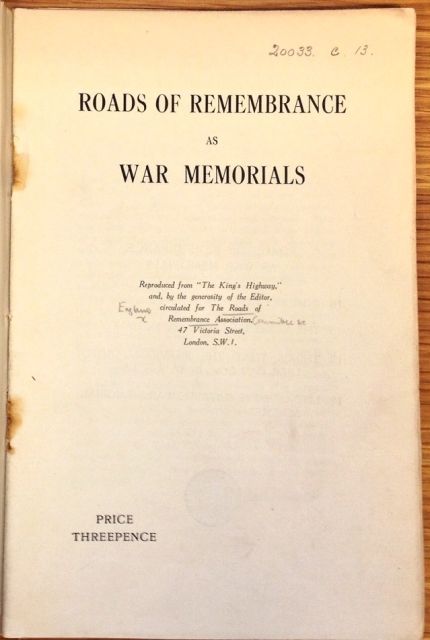 The scheme outlined proposals for building ‘highways of exceptional dignity and beauty, with open spaces at intervals as special memorials of the Great War.’ The central argument is that the memorial monuments could play a functional role in improving the local infrastructure. For example, suggestions included replacing a weak and dangerous hump-backed bridge with ‘dignified masonry’ example bearing the inscription:

‘This Bridge was rebuilt to commemorate the Heroes of the Great War.’

This utilitarian aspect of the Roads of Remembrance scheme would allow war memorialisation and highway improvement schemes to be combined. In the last section of the pamphlet twenty-one suitable schemes are outlined including a bypass on the London to Portsmouth road ‘to avoid the narrow and congested roads of Kingston.’

The editor of the King's Highway describes a scheme of this kind thus:

‘It seems to us that the first principle of a war memorial should be that everyone can participate in any benefits which it confers; Secondly and hardly less important, that it should be of a permanent character-something that will last of all time. Roads and bridges comply with these two conditions.’