In this guest post Alex Giles from City University, London, investigates stories from the empire from a socio-legal perspective, through researching Privy Council cases 1917-1920 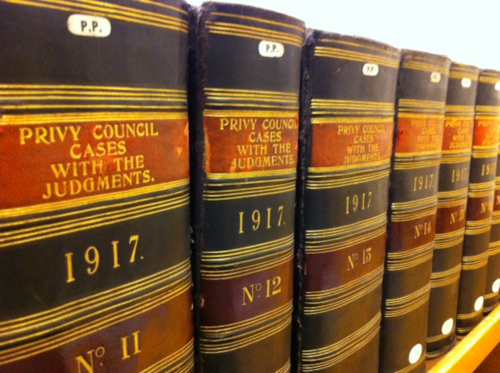 Volumes in the series catalogued as Appeal Cases Heard Before the Judicial Committee of the Privy Council (shelf mark pp1316). Copyright British Library Board.

The British Library holds a collection of bound volumes of Privy Council cases from 1861 to 2007 (PP1316). Looking at just four years of these at the height of the British Empire makes fascinating reading. Although the final judgments of all Privy Council cases are currently freely available online from 1809 to 2013 on BAILLI (British and Irish Legal Information Institute) or COMMONLII (Commonwealth Legal Information Institute), these cases are often worth reading in full... In other words their Records of Proceedings, judgments of lower local courts, witness testimonies and attached exhibits can really add to our understanding from a socio-legal perspective of this, the final court of appeal for the British Empire and its peoples.

In any one year during the  period 1917 – 1920 a small group of “English” law lords in Whitehall, who made up the Judicial Committee of the Privy Council, were deciding on approximately 140 cases originating from all parts of the world such as Canada, Australia, India, the Far East, Africa and the West Indies. The breadth of cases is quite staggering; from ancestral land and inheritance disputes in India using local Hindu matakshara Law or Mohammedan Law, to large commercial cases involving hydro-electric power or mining interests in Canada or Australia. Press and publishing disputes, personal injury, breach of contract for the sale of pig iron, insurance cases, workers’ compensation, licensing of a pub in Adelaide, patents, matrimonial and family, liability for fire damage to a rubber plantation, wills and probate – all with their own peculiar local flavour. One day they would be deciding on who should be running the local temple or muth in a Bengal village1, the next deciding on who owns vast tracts of territory in S. Rhodesia following the Matabele War and the fall of King Lobengula (a very interesting case which includes whole speeches by Cecil Rhodes2). 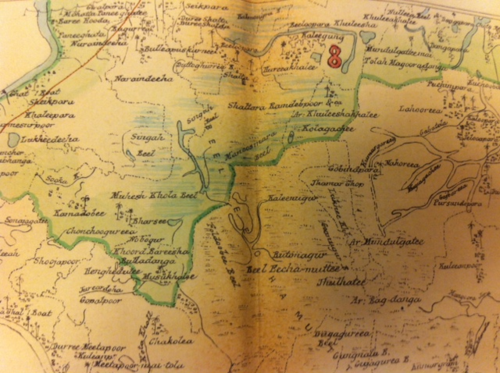 Map contained within the records of proceedings in courts below in  Judicial Committee appeal cases decided 1917 - 1920. BL pp1316. Copyright British Library Board.

Some cases in this set are still considered “good law” and are cited or mentioned in recent cases for example [1919] UKPC 136 Taylor v Davies3 regarding trusts4, or [1919] UKPC 825, which was recently cited in a case about HIV/Aids drugs patents6. Lawyers or law students may wish to read the entire original case in such instances.

Others’ interest could be in a particular subject area such as Sugar Cultivation in Queensland and the status/role of non-European workers ([1919] UKPC 1187), or Railways in India ([1919] UKPC 1308). These often lengthy cases give primary source details through witness statements and other documentary evidence which incidentally paint a picture of workers’ and peasants’ lives, the caste system, local language and customs of the time. 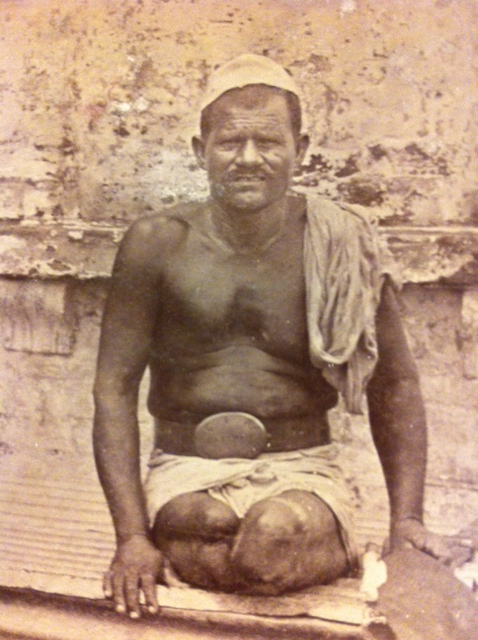 Photograph of an unknown person contained within the records of proceedings in courts below in Judicial Committee appeal cases decided 1917 - 1920. BL pp1316. Copyright British Library Board.

Sometimes the final judgments that we have of these cases are lengthy and informative, other times they can be so brief as to give no indication whatsoever of what the case was about. For example in [1919] UKPC109 the final judgment simply tells us:

“Their lordships will humbly advise His Majesty that this appeal should be dismissed with costs.”

So, without looking at the full case we wouldn’t know that this involved a complex family matrimonial dispute: A Christian man marries a Buddhist girl for her dowry. On the morning of the marriage instead of sending the kumarihamy (woman who dresses the bride) he goes and asks her parents for the balance of the dower. This offends the Singhalese parents whose custom is to pay the dower after the marriage ceremony before the assembled guests. There follows a long drawn out and tragic dispute; disinheritance, theft, general nastiness and sadly no mention of love or affection between the couple. Instead the original district judge sides with “the Respondents who were Christians and could not bear false witness” as opposed to “the Appellants who were Buddhists” and “not above it”. Fortunately a later judge is more discerning in weighing up the evidence, and comes to a more balanced decision, but from a socio-legal perspective what is interesting is the effect this has on their lives - which is recorded through their witness statements - and also the snapshot it gives us of a certain section of family life and the role of women in Ceylon at the time.

Volumes from this collection can be requested from shelf mark PP1316 for use in the Social Science Reading Room. For guidance on ordering and further information see the British Library web page Privy Council Appeal Cases.

Alex Giles LLB, studied law at Sheffield University, and the College of Law. He currently works for City University London in their City Law School libraries.