The pioneers of British Catering

In this guest post, Michael Flagg, the biographer and former student of Arthur Edwin Simms, recounts some of the 20th century pioneers in raising standards and improving education of professionals in British catering.

The quality and standards of food and beverages offered in today's hotels and restaurants, as well as hospitals, universities, and cultural institutions such as the British Library, owe much to early exponents. Taken for granted by the sophisticated clientèle of the UK Hospitality Industry today, are the efforts of pioneers such as Arthur Simms, Professor John Fuller and Victor Ceserani. Their work ensured a professionally qualified workforce equal to those in Switzerland, France and other European countries.

Changes in the British catering industry were also spurred by political and social changes. The decline in domestic staff meant that entertaining amongst the middle and upper classes increasingly moved from the home to the restaurant or club. With the ending of the Second World War, international travel for leisure became possible again. Revenues from foreign visitors to Britain were significant for economic recovery, and high standards in catering were crucial. 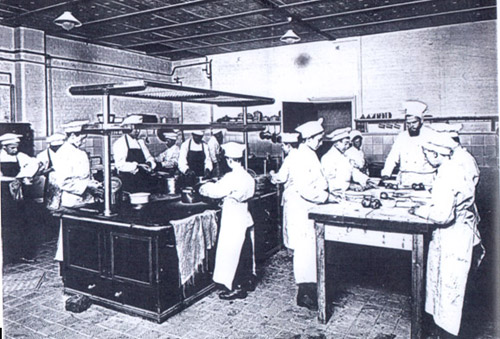 Among those leading the drive for excellence was Professor John Fuller, head of two university departments, and author of publications on cookery, nutrition dietetics, hygiene and gastronomy. Victor Ceserani, Head at Ealing College (now part of the University of West London), authored publications with Ronald Kinton and David Foskett on cooking and other catering techniques. The British Library holds the publications of these men, documenting the development of the catering profession as well as tastes and styles in second half of the 20th century.

Arthur Edwin Simms produced fewer published works than his contemporaries named above, but had perhaps the most interesting and varied career. During the Second World War, he helped found the Army Catering Corps and as Head Chef at the 1945 Potsdam Conference, oversaw the meals of Churchill, Stalin and Roosevelt. Following the war, he was a City and Guilds of London Institute Committee Member for the first Professional Chef Qualifications in 1947. Later, he was the founding head of three college departments, one of them at the Pusa Institute New Delhi India. He had just two publications, both now out of print. 'Restaurant Service A Manual on Training and Organisation' (Pub 1950, Reprinted 1964 English Universities Press, co-authored with Ronald Victor Crippa at Brighton Municipal College) and 'A Book of Recipes' co-authored with Steve Combes BA at Portsmouth Highbury College in 1966.

Michael Flagg is the author of  'From Punch and Judy to Haute Cuisine-A Biography of the Life and Times of Arthur Edwin Simms 1915 to 2003'.