Beyond Nature versus Nurture

On the evening of 11th March we held the public event ‘Beyond Nature versus Nurture’ which examined how the field of epigenetics has enabled scientists and social scientists to gain clearer idea of how environmental factors get ‘under the skin’ to change the way genes are expressed and cells behave. The evening examined how the dichotomy of nature / nurture as two opposed explanations for human behaviour and outcomes cannot be upheld with the knowledge we now have from the life sciences and social sciences. It showed how the sciences and social sciences can usefully work together to better understand differences between individuals and groups of people. The event was part of the series of events that have been organised to support the ‘Beautiful Science: Picturing Data, Inspiring Insight’ exhibition at the British Library (free, and on until 26 May).

George Davey Smith, Professor of Clinical Epidemiology at the University of Bristol, was our first speaker for the evening. He introduced the audience to the different factors which can influence the expression of genes, from events at the cellular level of the individual, to the experiences of our ancestors, which have been of particular interest to those working in epigenetics (see also Hughes’ article, below). In particular, Davey Smith described how ‘chance’ and random events in an individual’s life may account for health outcomes that could not easily be predicted by epidemiology. He talked about how the element of ‘chance’ in human life is an issue for other disciplines which aim to understand life trajectories, health and make predictions about outcome. The element of chance and unpredictability in human life seemed an optimistic line of enquiry to pursue given the constant bombardment of stories about known ‘risks’ in our press and media! George’s work has also considered the complexity of the interactions that development and environment can have on human health outcomes over a lifetime and how these factors are often hard to dissect. 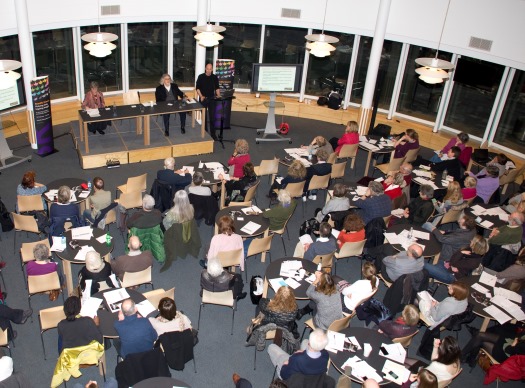 Above: panel and audience at 'Beyond Nature vs. Nurture' on 11 March 2014. © The British Library Board.

Nikolas Rose, Professor of Sociology and Head of the Department of Social Science, Health and Medicine at King's College London, began his talk with a brief history of the nature versus nurture dichotomy, tracing the influence of this particular conceptualisation on the development of (for instance) eugenic policies in the late 19th and early 20th centuries. He described the lasting and negative effects of controversial concepts such as eugenics on the relationship between the life sciences and the social sciences. Yet, Rose was optimistic for the future of the relationship between the disciplines, citing developments in epigenetics and epidemiology as exciting and with considerable potential for the different disciplines to work together. He described his own recent work about the impact of urban living on the individual psyche which takes into account the external environment of the city and its impact on the internal environment of the body. This project, which immediately made me think of Georg Simmel’s, ‘The Metropolis and Mental Life’, offers potential for finding transformative ways for the life sciences and social sciences to work together.

Thus, overall, the messages of the evening were optimistic ones. Many of us left thinking about the potential for more interdisciplinary events at the British Library and were rather less concerned than we may have been before about the potential damage we have done to our bodies (thinking that we may be one of the lucky ones that ‘chance’ favours!). I was reminded to really not pay too much attention to all the press interpretations of research on ‘risk’ (a message also clear in one of our previous ‘Myths and Realities’ events), but to rather consider the evidence from well-established epidemiological research about factors that can affect health risks and outcomes (such as smoking and lung cancer). It also seemed about time to dig out those A level Biology text books, as my scientific colleague kindly told me that stochastic pretty much means ‘random’. I’m going to have to look up DNA methylation though…!

Thanks to our speakers, and to the chair, Professor Jane Elliott, Head of the Department of Quantitative Social Science, for a stimulating evening at the British Library.