The First World War was, as is well known, a great catalyst for literary activity. The relationship between expectation and reality, the change, the magnitude of the experience and the sharp focus on the details are the matter of a literary experience that altered the direction of twentieth-century literature.

But these ideas could be equally seen in a non-literary written culture produced by the war, the trench journal. Trench journals were magazines produced by troops for troops. There were produced in vast numbers, at the front, in hospitals, behind the front lines, in troopships and in prison camps. Issues were printed in a small number of copies, or in their thousands. They are known from September 1914, and they immediately tell the experience of the war. They are important because, as J G Fuller writes in Troop Morale and Popular Culture in the British and Dominion Armies (1990), they are ‘ not coloured by subsequent experience, and they represent a collective rather than an individual commentary, validated to a large extent by their soldier audience.’ Effectively they represent the experience of the war to those who are going through the experience, presented by those who are going through the experience; as such they are uncoloured by subsequent thoughts and to a large extent give us an immediate idea of ‘what it was like’. This validity was recognised early on, as from 1915 the British Museum asked for copies of trench journals for their collection, and the British Library now holds 1138 issues, including Australian troopship journals, hospital journals and journals produced by German internees and prisoners-of-war. The most well known title is the Wipers Times, but there were hundreds of others.

They were produced by people who often had no professional journalistic experience, but employed the skills of soldiers who in civilian life were printers, compositors, or commercial artists. Some were made up in the trenches and printed back in Britain, others were copied out by hand and circulated amongst a handful of men. Full of in-jokes, poetry of dubious quality, limericks, pastiches, well and badly drawn cartoons, awful puns, diary-sketches that give self-censored references to the frontline experience, football results and thanks for gifts from home, they often resemble school magazines. But then the people who wrote and read them were in many cases little older than schoolboys. 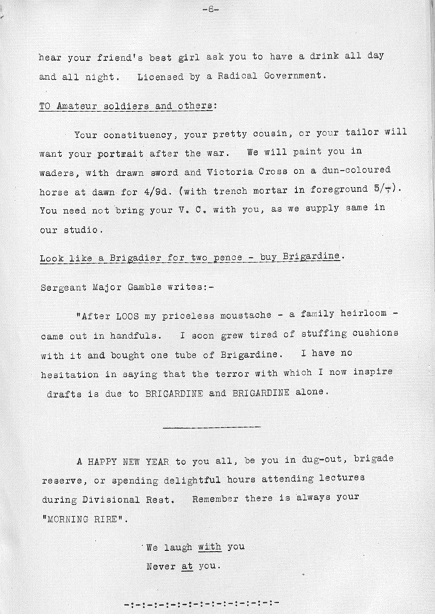 It is in homage to this extraordinary journalistic culture that the Languages and the First World War conference is working with Graphics students from Central St Martins College of Art and Design to produce a homage ‘trench journal’. It will contain articles by some of the people who wanted to come to the conference but were unable to attend, some linguistic titbits (including new finds), illustrations and photographs, excerpts from journals in the British Library collection and some in private collections, and pastiches of trench journal material.

The Central Saint Martins students have studied trench journals in the British Library collection, and for them this project, working in direct relation to a print medium a century old that was produced under the most stressful conditions conceivable, is a challenging venture. Various print methods are being explored, including letterpress and mimeograph, the print technique by which some of the more close-to-the-action original trench journals were produced. Echoing the ‘autonomy within self-imposd boundaries’ of the originals, the students have full design control of the journal, including the title; working from the description by Graham Seal (The Soldiers’ Press, 2013) of trench journals as a ‘democratic cultural republic amidst a hierarchical martial regime’, the publication is called At No-one’s Authority.

The relationship between the wartime journal editors and their superiors varied; while some were explicitly published under the authority of commanding officers, for others, circulating even in typescript or manuscript, this was not an issue. It is particularly pertinent that Koenraad Du Pont from the University of Leuven will be giving a paper on how an Italian trench journal, L’Astico, was centrally manipulated for propaganda purposes; in this case the attempt to use a range of dialects to cement camaraderie within the army backfired. Though British journals display attitudes of ‘grumbling but not complaining’, pride in achievement, group identity, ‘laughing will get us through’, and ‘getting on with the job’, these were perhaps uneasy and fragile masks of the soldier’s awareness of his unprecedented relationship with his environment, and manifestations of a desperate need to say ‘I am still here and alive now’.

At No-one’s Authority will be available in a very limited edition, and only at the conference, so book your ticket now.

Posted by Jonnie Robinson at 5:15 PM