Age is in the eye of the beholder

Social science curator Simone Bacchini reports on a recent conference at the British Library, which examined the portrayal of ageing. 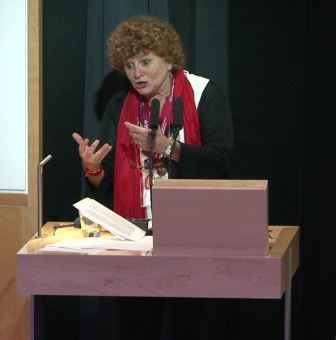 Everybody’s doing it, so we might as well be open about it. What? Drug-taking? No: getting older; it’s ageing I’m talking about.

And talk about it we did, at the one-day conference held at the British Library on Monday, 28 April 2014. To be precise, what we explored was how we talk about or, to be more precise, how we portray age and ageing. The event was co-organised by the British Library’s Social Sciences Department, Queen Mary University’s School of Languages, Linguistics and Film, and the Centre for Policy on Ageing (CPA).

You might think that this was a very academic debate, quite abstract and theoretical. And yes, many of the day’s speakers were indeed academics, starting with the keynote speaker, Professor Lynne Segal, - whose recent book ‘Out of Time: The pleasures and the perils of ageing’ (Verso, 2013) is an examination of her own life as well an exploration of ageing. But the whole point of the event was to show that the ways age and ageing are portrayed - in the media, in Government policy documents, or in countless everyday conversations – does have practical consequences. 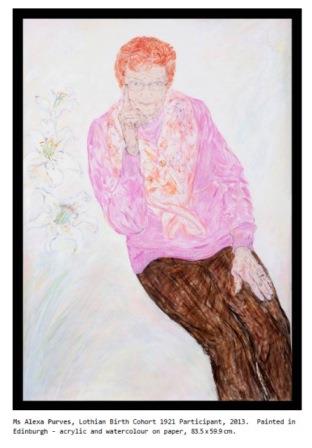 This portrait of Ms Alexa Purves (acrylic and watercolour on paper, 83.5 x 59.9 cm.), painted by Scottish artist Fionna Carlisle was displayed at the conference. It is part  of the artist’s cooperation with the Edinburgh-based  Centre for Cognitive Ageing and Cognitive Epidemiology for the  Portraits of an Intelligent Scotland project, an exhibition of portraits representing the lives of two groups of people: cohort participants in a unique study of ageing, and the scientists that are studying them.

Like many other occurrences, age and ageing do not appear to be problematic concepts, at least on the surface: age/ing is what happens when, well, when you get older. And yet, think about it a bit more carefully and problems begin to appear. Words like ‘old’ turn opaque: when does one become ‘old’, for example? Is it at 70, 80, or 90? Much depends on average life-expectancy, of course; which is why, in the West at least, who is and who isn’t ‘old’ and what society expects of them is constantly shifting.

So age and ageing have become ‘hot topics’. More and more people are looking at them from a variety of angles. This is why, here at the British Library, we decided to prioritise this disciplinary area by expanding the existing resources to facilitate its study and to actually bring together people with an interest in it, not only to exchange ideas but also to explore how to better respond, as a repository of knowledge, to their needs.

The idea for the conference began to form following an observation: on one hand, scientific innovations that allow us to live longer are hailed as great advances; while on the other, the fact that people nowadays live longer is regularly framed as a problem. The metaphors that are often used when the topic is discussed, for example in relation to the welfare state and health services are revealing: ‘time-bomb’ and ‘drain on resources’ are only two examples. And in discourse on ageing populations, older citizens (itself a problematic label: who are ‘the elderly’? Are they all the same?) are often portrayed as ‘takers’, leading comfortable lives at the expense of the younger generations who, when their time comes, will not be as fortunate. The messages we receive are, in other words, contradictory; age is both an opportunity, especially in a market economy that sees longer lives as a chance for prolonged consumption, and a burden, for its ‘costs’.

The ways in which we, as a society, represent age and ageing are therefore relevant and have consequences for the ways we construe and relate to older people. From policy-making to intergenerational relations, the ways in which age is construed and presented are never neutral. They can and should be constantly challenged; to do so, both the art historian and the sociologist, the social worker and the literary theorist, as well as – let’s not forget it – older people themselves, can and should contribute to the debate. Something we hope to have facilitated with this event, a video recording of which will soon be available (watch this space!).

And anyway, when does ageing really start? The day we are born, one may say.