"Beyond the Boundary of Sleep": Mega-Events and Memory

Andrew Rackley is a collaborative doctoral student at the British Library and the University of Central Lancashire. His research principally focuses on how a national institution, such as the British Library, documents a Mega-Event like the Olympics, and his interests include sport and the relationship between memory and archives. Follow him on Twitter

I haven’t written anything for a few months. I believe I was distracted from my last blog post by the curling and the silver and bronze medals Great Britain managed to win for it.
The past few weeks have kept me quite busy; even if Wimbledon and the World Cup may be alarmingly distant memories, the Commonwealth Games and the Test cricket have valiantly stepped in to fill the void. As a student, some people like to tell me that this is procrastination, but I just think that’s counter-productive.

At any rate, the conclusion of the World Cup got me thinking: did the spectacle overshadow the event? For me, Rio proved an interesting phenomenon as widespread dissent and clashes between protesters and police punctuated the preparations. Question marks remained over the readiness of the stadia, infrastructure and ticketing. Yet once the football was flowing these concerns seemed to melt away: Brazilian support showed in colour and volume, the sound of almost 75,000 voices inside the Maracanã continuing the national anthem well beyond FIFA’s curtailing of the musical accompaniment stood in stark contrast to the expositions of patriotism usually experienced when England play, for example. Contrary to Terry Gilliam’s dystopian imagining that seemed to be brewing, there was an almost ‘Carnaval’ atmosphere, and even the Americans got in on the fun.

A recent BBC article pondered the legacy of the World Cup and the lessons Rio could take forward to the 2016 Olympic Games. For an event widely considered to have been a success, public opinion in Brazil seems to have been drowned out by the pure spectacle of the beautiful game, the popular consensus being ‘there is no legacy’. This is an excellent example of an, albeit international, ‘collective’ memory at work, whereby many of the less salubrious memories of protest  and dissent, that marred the preparations (and almost certainly continued throughout the tournament) seem to have been airbrushed out. A part of me wonders whether these negative sentiments are framed by Brazil’s lacklustre performance, and ultimately the resounding 7-1 defeat to Germany (Oscar being the only Brazilian on the score sheet for all you pub quiz fanatics); would it have been the same following London 2012 had Team GB not put in the stellar performance that they did?

London 2012 was not without its issues: G4S and the security scandal, Olympic lanes and the cost to the nation are but a few issues that come to mind; but such inconveniences do not compete with the national euphoria that accompanied the generally good weather, positive London attitude and sporting success experienced during those heady days. This is where memory institutions come to the fore and is a great example of the important role they play in documenting the knowledge legacy of such events. In collecting, storing and disseminating the knowledge legacy of London 2012, the British Library is one among many memory institutions that are able to reveal a more nuanced picture of the Games. A few examples have jumped out at me in the past few days. Social media and the internet allow for a great many voices to be heard, not all of which were optimistic about the Olympics. Two such examples have been captured by the UK Web Archive’s Olympic and Paralympic Games 2012 Special Collection. The first example is something of a personal favourite that uses a strikingly simple method of protest to question the vast sums of money spent in bringing the Olympics to London by suggesting an alternative logo for the event. Another fascinating insight into the Olympic Movement is captured through Games Monitor, a website dedicated to debunking Olympic myths and which seeks to, in their own words, ‘deconstruct the 'fantastic' hype of Olympic boosterism and the eager complicity of the 'urban elites' in politics, business, the media, sport, academia and local institutional 'community stakeholders'’. 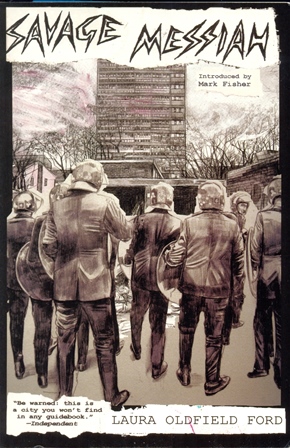 Despite the contemporary ubiquity of digital media, some types of protest still find their outlet in analogue form. Comic books can often be subversive and, as such, are often utilised as vehicles for protest. At the Comics Unmasked exhibition, there is a comic entitled ‘The Strip’ by Laura Oldfield Ford. This piece, created in 2009 for publication in ArtReview, has been loaned from a private collection, however a larger body of work, Ford’s ‘Savage Messiah’, is held at the Library. Both ‘The Strip’ and ‘Savage Messiah’ offer visual journeys through London’s ‘architectural follies of high-rises and gated estates’ whilst questioning the Olympic legacy by offering visions of reality charted through the experiences of ‘urban drifts’ faced by the spectre of regeneration in forgotten fringes of the capital.

From subversive, counter-culture re-imaginings of famous designs, through websites documenting the hard work of various local communities, to forms of expression often maligned as being ‘just for kids’, there are many alternative stories waiting within the walls of the BL, and on the servers of the UK Web Archive, for those who are willing to look for them.

Now I’d love to stay and chat, but if I’m not mistaken that’s Boycott on the boundary with a stick of celery, and he’s calling me in for tea.

'Beyond the boundary of sleep' is taken from Michael Laskey's poem 'On having given up cricket', which can be found in: