Beginning on 29th September 2014 and running for 7 weeks, the University of Sheffield has developed a new, free, online course ‘Exploring Play: the Importance of Play in Everyday Life’ which will be delivered through the FutureLearn platform. Through the course, we aim to investigate play as a serious subject for study and in particular examine the place of play as an
important part of our everyday lives, across our life courses. Play is not only something that occurs in childhood, with a moving away from ‘childish pleasures’ in adulthood, but it is an essential part of life.

‘Exploring Play’ doesn’t require any previous knowledge in the area, just an enthusiasm to know more. It introduces key theories and concepts, and explores the many definitions there are of play. Given that play is such a fuzzy concept, some consideration is given to the meaning of play from different personal, academic and professional perspectives and its value in terms of its contribution to our daily lives is a matter for extensive reflection.

The course is highly interactive and uses video, articles, discussions, quizzes and a wide variety of resources including the British Library Playtimes website. This website was created as part of the AHRC Beyond Text project Children’s Playground Games and Songs in the New Media Age and provides information on the history and nature of play, drawing on some of the data collected in that project. In the ‘Exploring Play’ course, learners will engage with the material on the British Library website and consider what it tells them about changes in play over time.

Children playing on stones in a river © University of Sheffield

One of the main aims of the course is to enable participants to understand the very varied nature of play as it takes place across difference contexts. For example, the nature of play in different cultures is explored and learners will consider the way in which the values of different societies impact on the play that takes place within them.

A very wide range of topics is considered, including outdoor play spaces for children and teenagers, playful adult engagement with urban environments, disability and play, play in virtual worlds and play in the workplace. Through the seven weeks of the course, learners will gain a great deal of knowledge about play - and engage in some playful learning activities along the way!

Posted by Jonnie Robinson at 11:00 AM

Just over a year ago I wrote a short blog post ‘Memory Place’ which recorded my reaction to seeing a particular item in our Propaganda Power and Persuasion exhibition and how it evoked memories of the fire at the Cuming Museum, Walworth, a few months earlier. Since then I have been prompted to explore some of the Library’s holdings relating to the study of regeneration and re-development.

Why these particular areas of study? Well, the Cuming Museum, the town hall and the Newington library remain under plastic wraps or behind hoardings following the fire last year, but thankfully they have not disappeared as if part of an illusionist’s amazing turn of prestidigitation. However, over the last few months many other buildings have disappeared behind similar wraps or hoardings to re-emerge as temporary piles of rubble. This is all part of the vast and often disputed project to replace the Heygate Estate with Elephant Park and the wider redevelopment plans for this particular part of South London (or as it was once described ‘London South Central’).

As the re-development progresses I have been taking photographs in an attempt to record how once familiar places are being removed. Often you are confronted with rather peculiar sights such as spotting the wreckage of this car: 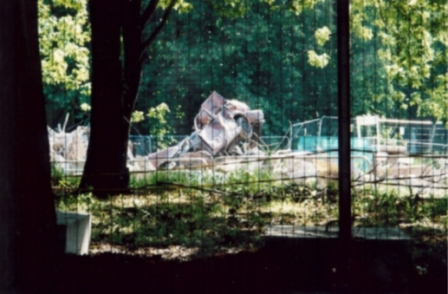 Car wreckage at the Heygate Estate. Photograph by author.

This prompted me to wonder: who had left it behind, had the contractors forgotten to ensure that the garages were empty before demolishing them, could the owner not be contacted or had a film crew decided to take advantage of the demolition sites to record a scene for an apocalyptic movie or gritty television crime drama? Maybe it is a left over prop from the filming of ‘Attack the Block’, ‘World War Z’ or perhaps even as far back as ‘The Bill’? To me it is also one of many images which represent the “shock and awe of urban renewal….” as Professor Michael Keith phrases it [Chapter 14, The Routledge Companion to Urban Regeneration, 2013]. 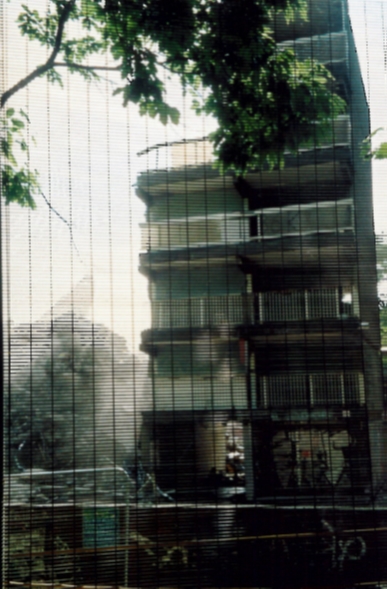 Demolition at the Heygate Estate. Photograph by author.

As you can probably tell I am not a very good photographer. To gain a much better sense of the many types of media being used to research and record changes to ‘material culture, heritage, urban life, place-making practices and spatial politics’ you can read Dr Bradley L Garrett’s blog post on Visual Urbanisms: Perspectives on Contemporary Research and Holly Gilbert’s post Perceptions of the Material Landscape.

A large number of videos, created by a wide range of people, including those recording the oral histories of some of the former residents of the Heygate, can found online  by searching for ‘Heygate Estate’. Other websites worth looking at to gain different perspectives on project include those of the developers and groups such as Southwark Notes , The Walworth Society and 56aInfoshop.

Anyway, I’ll conclude with a select bibliography of some of the latest academic publications on the subjects of regeneration and gentrification held by the library:

In addition to this very short bibliography there are numerous articles and reports available via our Social Welfare Portal and Management and Business Studies Portal. Whilst writing this particular post I have also found many other collections items which cast light on how current regeneration schemes within the UK fit into a wider social history including the ‘improvements’ of the late 19th century, the development of the garden cities movement of the early 20th century, post-war modernist architecture and urban planning, the entrepreneurial property-led regeneration of the 1980s and redevelopment schemes which have formed part of recent sporting ‘mega-events’.   More of that in another blog post. 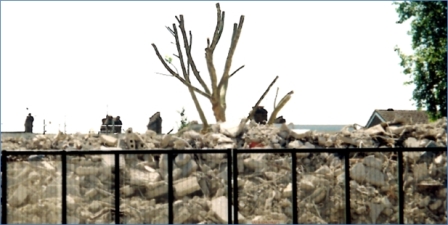 Rubble at the Heygate Estate. Photograph by author.