Last month Polly Russell and I joined about 1000 other people in a vast auditorium at the Institute for Education for the Feminism in London Conference. We were there partly for professional reasons - Polly, a Curator at the British Library, manages a project to digitise, preserve and make freely available the complete run of Spare Rib magazine and I have been working as a volunteer with her for the last ten months. But we were also there as committed feminists, curious to find out more about feminist campaigns, issues and arguments. The atmosphere in that auditorium at the start of the conference was exciting, welcoming, irreverent yet serious and this set the tone for the rest of the day. 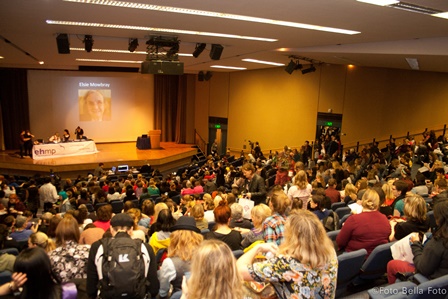 The conference comprised lectures, panel discussions and workshops on a wide range of feminist issues including Grounding Feminist Activity in our Everyday Life, Intersecting Oppressions In The Sex Industry and Sisterhood Around The Globe, for instance.  Annette Lawson OBE (National Alliance of Women’s Organisations) kicked off the day with her keynote speech, ‘Feminism in Context’ in which she explored the sources of misogyny and asked why people are often reluctant to use the word ‘feminist’.  Lawson was followed by a rousing speech from Dr Gail Dines, author of Pornland: How Pornography has Hijacked our Sexuality and Professor of Sociology and Women’s Studies.

Dines aims to put the radical back into feminism, and argued that the core principal of feminism, ‘the personal is political’ has been undermined by too much emphasis on personal empowerment at the expense of a wider collective feminist activism.  She argued that women in positions of privilege and power have ‘sold out’ to do the bidding of powerful men and that while patriarchal power structures are embedded in institutions, women are never going to gain a rightful share. Dines is a powerful speaker who doesn’t mince her words. She captivated the crowd with her no holds barred analysis of pornography and racism in pornography, subjects we had another opportunity to explore at a film and discussion event over the lunch break, The Porn Industry has Hijacked our Sexuality.

In the morning, we attended Feminist Archives and Activism: Knowing Our Past - Creating Our Future, a workshop which explored the importance of preserving and celebrating feminist history.  From our perspective this was an opportunity to find out about the important work of feminist libraries and archives, to meet a range of feminist librarians and archivists and to talk about our project to digitise Spare Rib. Organised by the newly formed national network of Feminist Libraries and Archives, FLA, this workshop was chaired by Sue O’ Sullivan, member of the Spare Rib collective and Sheba Press. Panel  members included Yasmin Ahmed from the Feminist Library , Frankie Green from the Women’s Liberation Music Archive, Jalna Hanmer from the Feminist Archive North, Zaimal Azad from Nottingham Women’s Centre, Sue John from Glasgow Women’s Library, and Liz Kelly and Joan Scanlon from the radical feminist journal Trouble & Strife.

Liz Kelly talked about the impetus for digitising Trouble and Strife magazine – a desire to ensure that the ideas of older-generation feminists are available online to younger feminists. The interactive online resource takes articles from past editions of the magazine and reflects on these from a present-day perspective.  Kelly was keen to encourage women to get in touch if they wish to contribute to the website,  www.troubleandstrife.org.

Yasmin Ahmed, gave us a potted history of the Feminist Library which started in 1975 and houses a large archive of Women’s Liberation Movement material, as well as an extensive collection of feminist books, journals, photos, leaflets and pamphlets charting different feminist perspectives from around the world.  Ahmed’s presentation stimulated some interesting discussion about modern attitudes to de-cluttering and whether it is ‘worth’ keeping our old magazines and other memorabilia.  The resounding message from the older feminists in the room was “don’t throw anything away!”  Indeed, the Feminist Library will take people’s old books, photos, leaflets etc. and archive them.  One younger delegate said how much she enjoys handling the resources held in libraries and archives, in contrast to using the internet for research. Others concurred with this and argued that physical space of a library can play an important part in creating and maintaining feminist communities. The consensus was clear, in our digital age there is still a place for physical items and for spaces where feminist activists, historians and scholars can come together and share ideas and resources. 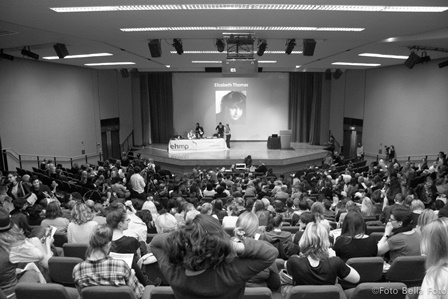 In the afternoon, I attended the workshop on Fighting Against Patriarchy in Turkey.   The panel comprised four inspiring young women from the Istanbul Feminist Collective who gave us a vivid picture of how feminists are organising in Turkey to develop a feminist theory and practise against the system of patriarchy.  These women made a real impression on me.  They had such a firm handle on what is needed to make a real difference to real women in Turkey and explained their goals with focus and clarity.   Violence and sexual violence against women were key themes.  They talked about how the women’s movement in Turkey has successfully argued that so-called ‘custom killing’ or ‘honour killing’ should be called femicide.  For them, every male crime against a woman is political in a country where at least three women per day are killed.  But it is in the domestic sphere and in the labour market that the Istanbul Feminist Collective believe deep change is needed if women are to gain the independence needed to rise up against violence and oppression.  Men control women’s labour in Turkey, both paid and unpaid, the collective argue.   ‘We want our dues back from men’ was how one of the panellists described their goal to ‘force the state to demolish the gender division of labour’.  This was powerful stuff.

Intense and inspiring in equal measure, the conference achieved a good balance between academic debate and discussion of how issues of inequality affect women in their everyday lives.  There was also plenty of entertainment on hand with the fantastic stand-up comedian Kate Smurthwaite chairing the plenary session and a poet in residence who spent the day gathering material for a poem which she then performed at the closing session.  The day ended on a real high note with a feminist party with performances from feminist band the Stepney Sisters, formed in 1975, performance poet, Carmina Masoliver, artist and activist Rebecca Mordan (founder of Scary Little Girls), and many more. Lively, engaging, challenging and rich, this conference had something for everyone.