Robert Booth writes about Shopping in Suburbia and 1960s market research on the rise of the supermarket:

The rise of budget supermarkets and online shopping, the declining popularity of the big weekly shop and the announcement of branch closures across the country leave established British supermarkets in an unusually precarious position. Until about 20 years ago the ascendancy of the supermarket seemed unquestionable. They have so dominated the food landscape it has been easy to forget that they have only been around for about 60 years. An early market research report titled Shopping in Suburbia provides both evidence of early reactions to supermarkets and a sense of how revolutionary they actually were when they first appeared on the high street. Published in 1963, Shopping in Suburbia recorded and analysed women’s reactions to the novelty of supermarket shopping. It offers an insight in to a time supermarkets were starting to replace independent specialist retailers like butchers, greengrocers and bakers. According to the Centre for the Study of Retailing in Scotland, between 1961 and 1971 there was a net decrease of 60,000 shops in the UK . From today’s perspective Shopping in Suburbia is revealing and prescient. 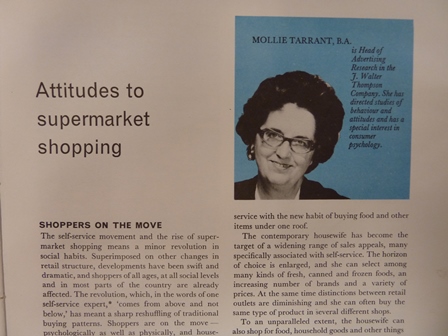 The rise of the supermarket changed shopping habits, encouraging consumers to become more exploratory shoppers. One 57 year old housewife remarked that “when I see something new that I wouldn’t think of to buy at the ordinary store, at the supermarket I can look at it and read the directions”. In a supermarket, shoppers could browse at their leisure, without being subject to the scrutiny of a shopkeeper. The report is a reminder of the role supermarkets have played in introducing consumers to new foods and styles of eating and have, therefore, been a key factor in shaping the nation’s tastes. 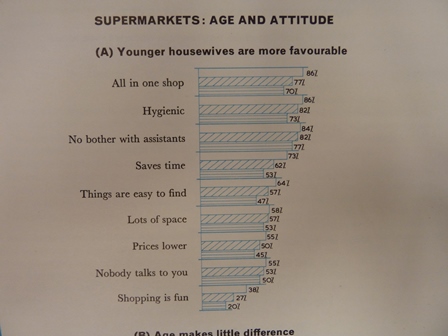 One contemporary criticism of supermarkets, that they encourage us to buy more than we need, is also touched upon by the report, with one interviewee noting that “most people seem to believe you spend more and it is easy as everything is laid out and it’s so easy to pick up packets and tins of things that look nice”. When Shopping in Suburbia was written the advertising industry was becoming increasingly sophisticated and the idea of ‘consumer psychology’ was beginning to gain acceptance. Without the involvement of the shop keeper to guide the consumer, branded packaging was required to speak for itself for the first time.

One aspect of supermarket shopping commented on by many of the respondents in Shopping in Suburbia is the increased sense of anonymity it offered shoppers. Opinions were mixed as to whether or not supermarkets were ‘friendly’ places to shop , yet 74% of housewives in the report agreed with the statement that “Nobody knows who you are in supermarkets”. For a lot of shoppers in the 60s, it seems that such anonymity was a good thing. One particular correspondent relished no longer “having to bother with the shop assistant” and the report notes that the findings “suggest a certain degree of isolation may be acceptable”. Whether or not the housewives of the 60s would have welcomed self-service checkouts remains debatable though.

Views about supermarket owners, much as today, were varied. “I don’t think they have a very good opinion of the public,” claimed one respondent, “I think they prey on their weakness to buy.” Not everyone that the researchers spoke to was so critical though, with one lady picturing “a person capable of handling staff, fair in his judgements, everything to his finger-tips and knows exactly what’s happening in his shop”. 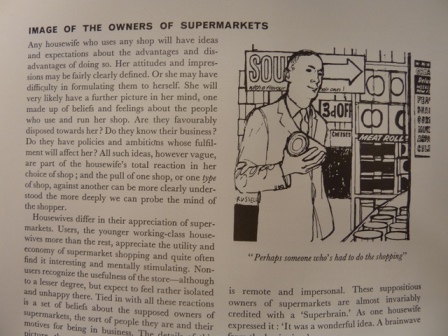 Importantly, the 1963 supermarket consumer is assumed to be a woman. Shopping is acknowledged as being just one of any woman’s “major household tasks”. The increasing popularity of supermarkets did, however, allow women to spend less time shopping and to do so less frequently. Considerations of housewives’ class and social status are also central to the report, with working class women’s attitudes towards supermarkets generally more positive than those of other groups. The only men that feature in the report are supermarket managers, owners and workers. The idea of asking a male consumer what he thinks about the changing nature of shopping isn’t even entertained.

It is perhaps ironic that the writers of the report had concerns that supermarkets were becoming too commonplace and were too closely located. Today, Tesco alone has 3300 stores across Britain; when the report was commissioned in 1961, there were only 572 supermarkets in the whole country. The information laid out in Shopping in Suburbia offers an excellent glimpse of a time when supermarkets were a novelty and serves as a reminder of how the dominance of the supermarket is a very recent, and not necessarily inevitable, phenomenon.

Retail change in Britain during 30 years: the strategic use of economies of scale and scope – John Dawson, Centre for the Study of Retailing in Scotland (2004)

Posted by Robert Davies at 3:15 PM