Update! We won! Very pleased to say that our film won the Courseware and Curriculum Non-Broadcast award. Details are at http://bufvc.ac.uk/events/learningonscreen. Congratulations to Director Alec Millward, author and presenter Maiken Umbach and all involved.

We're very excited to report that one of the films from our online course Propaganda and Ideology in Everyday Life has been nominated for a Learning on Screen award. 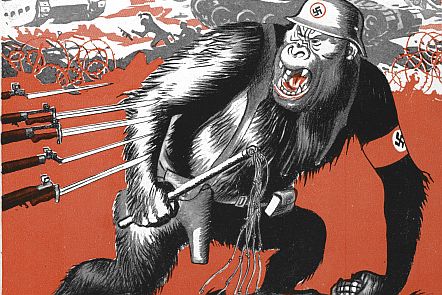 The Battle for Civilisation, British leaflet from Word War Two

The award, to be announced on the evening of 28th April, is in the category of Courseware and Curriculum non-broadcast production. Our film, 'From the "Just War" to the "Unjust Peace"', features in week 2 of our course, which addresses issues related to justice and protest. The film is presented by Maiken Umbach, Professor of History at the University of Nottingham and one of the lead educators on our course. Learners are asked to consider the problem of violence and justice, reflecting on an exhibition of photographs made by Lee Miller. The photographs document the liberation of Nazi concentration camps, including images of violence against the Nazi perpetrators of atrocities. For our course, the question is whether violent methods have a role to play in justice, and the role of war as a means of restoring justice.

The films in our course are designed to explain current thinking and research around issues that are often complex and contested. Bringing a range of perspectives on propaganda and ideology, they feature researchers from disciplines, including history, politics, sociology, media studies and psychology. Our course has 18 short films in total, four of which were made at the British Library and feature material from our collections of maps, Chinese posters, and British World War Two publications.

As with other learning steps on the course, the aim is to generate an informed and diverse debate on politically significant topics that have relevance to our everyday life. When we first ran the course last year, we attracted thousands of learners from over 20 countries around the world. Across the five weeks of the course, participants learned from each others' experience and opinions, and drawing on the leading-edge research presented in the learning steps.

We're very excited that a film from our course has been nominated for a Learning on Screen award, and wish Maiken, director Alec Millward, and the production team the best of luck for Thursday evening. Our course starts on 16th May, and you can register for free now at http://www.futurelearn.com/courses/propaganda