Update on the digital Spare Rib: important information for researchers and contributors

On 7th June 2016 the British Library redacted approximately 20% of the content on its Spare Rib website. In this blog post (originally published 8 April 2016) Curator Polly Russell explains why the redactions are taking place and calls for Spare Rib magazine contributors to come forward.

The British Library continues to seek contributors to Spare Rib magazine to request their permission to reinstate their works. For more information please email copyright@bl.uk. 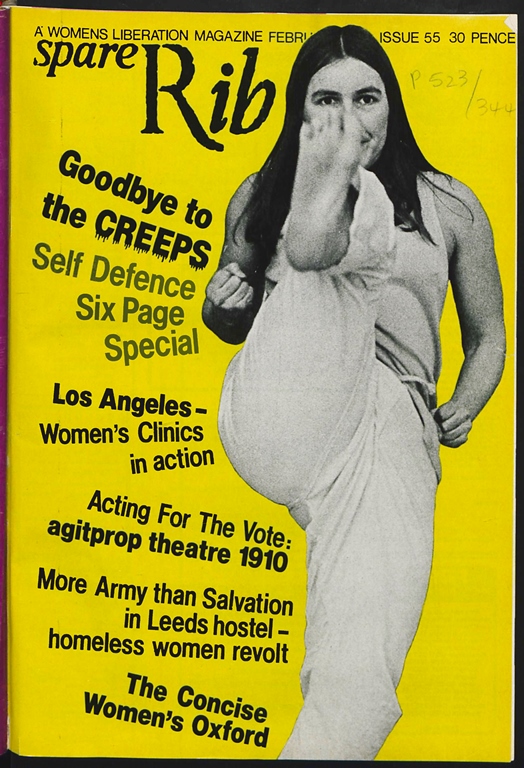 Vibrant, relevant and irreverent, over its lifespan (1972-1993) Spare Rib magazine documented the evolution of the Women’s Liberation Movement in the UK and tackled subjects like abortion, the gender pay gap, domestic violence, racism and sexuality, breaking taboos and setting the political agenda for a generation of women.

It was partly a love of Spare Rib magazine – of the hope it came out of, of what it tried to embody in its collective structure, of its courageous call to arms and of its embrace of debate and challenge – which drove the British Library’s ambition to digitise Spare Rib three years ago.

From the outset we knew that the project would be difficult. Spare Rib was a unique publishing phenomenon; organised as a collective, the magazine had over 4,700 individual contributors. Attempting to clear the rights for these copyright holders has been a fiendish task, not least because the vast majority of Spare Rib contributors were not professional authors, but ordinary women encouraged by the magazine to share their experiences and get involved.

Early on in the project we enlisted the support of four former Spare Rib collective members to advise us and to help us track down contributors. In May 2015, after two years of seeking contributors and encouraged by the positive response of those we contacted and by a new body of copyright law which enables libraries to digitise in-copyright material, we launched the digital Spare Rib, publishing the entire run of magazines on the Jisc Journal Archives site and a curated learning resource on the British Library website.

The response from the feminist and research community was overwhelmingly positive. However, following the launch there has been some feedback from trade bodies representing the rights of authors and visual artists.

The feedback prompted us to undertake a full review of all the content on the site, working closely with the trade bodies who approached us in order to ensure good practice around rights clearance procedures.

Since the launch we have continued to clear rights for a further nine months, but there remain around 1000 contributors for whom the legal copyright status of their works remain difficult to resolve.

It is with regret that after careful consideration and discussion with stakeholders, we have decided to redact the images and articles by these contributors.

The majority of the material on the website (approximately 80%) will remain available, the physical magazines remain accessible to researchers in the British Library Reading Rooms in London and Yorkshire, and we will do everything we can to reinstate material where we do receive permissions from these contributors in the future.

Spare Rib was, and still is, a terrific magazine. When it was first published it pioneered a new kind of politics and publishing. It campaigned for women’s rights and for women’s voices to be heard. It is not without irony, therefore, that in its digital incarnation it has been at the vanguard of testing the impact of new legislation and new technologies which force us to consider the difficult balance between the rights of individual copyright holders and the desire to share an important feminist legacy with as many people as possible.

“The four of us from Spare Rib were delighted to work with the British Library on their ground-breaking project to digitise Spare Rib magazine and make it accessible online.

Spare Rib was the most public, passionate and popular publication emerging from the women’s liberation movement of the 1970s and 80s. It showcased every facet of feminism nationally and internationally in its wide and challenging coverage. Spare Rib’s inclusive and radical practices transformed readers into activists who became valued contributors.

The quality and value, both to researchers and activists, of this vital and unique historical resource is threatened by the loss of 1000 contributors' work, leaving black holes in the fabric of those twenty years of feminist representation, unless permission is granted for the work to be included. So, Sisters/supporters, if you contributed 'content' in any form and haven't yet been in touch with the British Library, please do so urgently. We need to hear from you!”

If you are a contributor to Spare Rib and you have not yet heard from us, please get in touch and let us know if you give permission to publish your work by emailing copyright@bl.uk.

Blog by Polly Russell, Curator of Contemporary Politics and Public Life at the British Library